xxxxxThe Italian Thomas Aquinas, a member of the Dominican Order, was professor of philosophy at Paris University before going to the papal court as an advisor. His philosophy, which owed much to Aristotle, held that knowledge was not only achieved through reason, but also through faith as revealed in nature and the scriptures. A man of great intellect, his thought has come to represent the basic doctrine of the Roman Catholic Church. He produced more than 80 books, including two of his major works, his Summa contra Gentiles - an attempt to convert Muslims - and his unfinished masterpiece begun in 1264, Summa Theologica on the nature of God, morality and Christ’s mission. He was canonised in 1323. 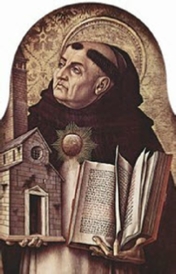 xxxxxThe Italian philosopher Thomas Aquinas was born of a noble family in the castle of Roccasecca near Aquino (hence his name). He studied at the university there and, inspired by the work of the Dominican friars, joined their Order in 1244. He continued his studies at both Cologne and Paris and then, having gained his doctorate in 1252, taught at the University and was appointed professor of philosophy. He later went to Rome as advisor to the papal court, and from that time onwards he spent much time travelling in the service of his order.

xxxxxHis particular philosophy, known as Thomism, owed much to Aristotle, and, indeed, is sometimes referred to as Christian Aristotelianism. His major accomplishment was in adapting the accumulated knowledge of his time - the teaching and writings of such men as Aristotle, Augustine, Averroës and Maimonides - to confirm and, indeed, justify the Christian faith. But knowledge, he argued, was achieved not only through reason - as in the case of the classical scholar - but also through faith as revealed in both nature and the Scriptures. In other words, reason is able to operate within faith. In reconciling human intellect with Christian faith and doctrine, Aquinas earned a place as one of the most influential theologians of all time. Indeed, his thought has come to be regarded as the basis of the official philosophy of the Roman Catholic Church. 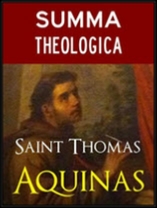 xxxxxA prolific writer, he produced more than 80 works. One of his first writings was an evaluation of Lombard's Four Books of Sentences, and he also wrote a series of commentaries on Aristotle and the Bible. His major works are his Summa contra Gentiles, - in which he attempts to convert Muslims by reasoned argument - , and his unfinished masterpiece Summa Theologica, begun in 1264 and dealing in three parts with the nature of God, morality, and Christ’s mission. In this he argued that God was the cause of change, the beginning of existence, the ultimate in goodness, and the director of life’s purpose.

xxxxxAquinas was taken ill in 1274 while travelling to the Council of Lyon, and died a short while later at the Cistercian monastery of Fossanova. He was canonised in 1323.

xxxxxIncidentally, as already noted, the works of the brilliant 12th century Moorish philosopher Averroës (also known as Ib Rusd) had a particular influence upon Aquinas’ thought. Writing some hundred years earlier, he had used the ideas of Aristotle to argue that reason could play a useful part in confirming religious belief - in his case, the faith of Islam.