xxxxxThe Thirty Years’ War - a series of conflicts - began in Germany as a fight between Protestant and Catholics, but gradually developed into a struggle over the control of Germany itself, pulling in countries from all over Europe. German principalities fought against each other, whilst outside countries, like France and Sweden, saw it as a chance to curb the power of the ruling Austrian Habsburgs. In the long term, the Peace of Augsburg of 1555 (M1), an attempt at a religious compromise, had only served to inflame the differences between the Protestants - mainly in the north - and the Catholics, mainly in the south. The spark which ignited the conflict occurred in May 1618 when Protestants in Prague seized two of the king’s Catholic ministers and threw them out of an upstairs window (an event known as the “Defenestration of Prague”). At first the Protestants carried all before them, but in 1620 they were soundly defeated at the Battle of White Mountain, and their fortunes slumped. By 1624 Bohemia, the epicentre of the Protestant cause, had been forcibly returned to the Catholic faith. The devastation and misery caused by the war was immense but, as we shall see (1625 C1), worse was to come as other countries became evolved in the conflict. 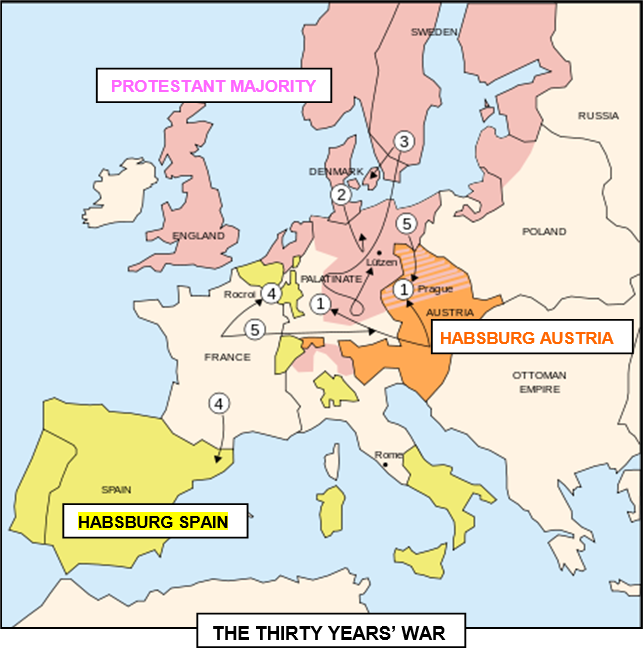 xxxxxThe Thirty Years’ War - really a series of conflicts - proved to be one of the most destructive clashes of arms in European history. It began in Germany in 1618 as a fight between Protestants and Catholics, but gradually developed into a struggle over the control of Germany itself. Thus whilst it was fought mainly in the Holy Roman Empire, it involved many of the countries of Western Europe. Furthermore, as the struggle deepened and widened, other antagonists emerged, hoping to benefit from the fog of war. Old rivalries flared up between German principalities, each bent on gaining religious or political advantage, whilst certain states, like France and Sweden, saw the war as an opportunity to curb the power of the ruling Austrian Habsburg family, then dominating much of Europe.

xxxxxThe religious hatred which brought about the War had been simmering just below the surface since the early days of the Reformation, and had not been helped by the Peace of Augsburg in 1555 (M1). This settlement, by giving German princes the right to impose their own choice of religion upon their subjects - seen as a necessary compromise at the time - had only served to inflame religious differences in the long term. The first phase of the struggle lasted for some ten years and was mainly the result of restrictions placed on Protestants and attacks upon their churches during the reign of the Holy Roman Emperor Rudolph II. Lines were drawn as early as 1608 when the Protestants, mainly occupying the north of the empire, formed a defensive alliance known as the Evangelical Union. This was countered the following year by the formation of a similar organisation, the Catholic League, by the Roman Catholics. All that was then needed was a spark to light the powder keg. 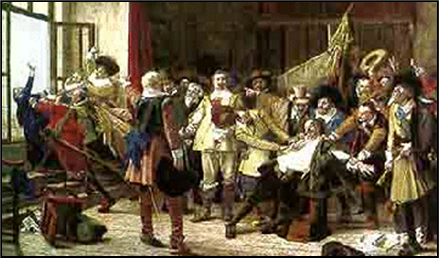 xxxxxThisxspark, known as the “Defenestration of Prague”, was provided by the Protestants of Bohemia, a majority of the country's population. They protested against the discrimination of the Roman Catholic hierarchy and, when their Catholic king, Ferdinand II, refused to take any action, they took matters into their own hands. In May 1618 a group of Protestants in Prague entered Hradcany Palace, seized hold of two of the king's ministers in an upper chamber and with the cry “Let their Mary save them now”, threw them out of the window ("Defenestration" comes from the Latin word for window, fenestra). Apparently both men survived the fall, but this was a rallying cry for Protestants throughout Germany. The Thirty Years War’ had begun.

xxxxxAt first, the Protestants carried all before them under their leader Count Heinrich Matthias von Thurn, and at one time in early 1619 their armies came close to capturing Vienna, the Habsburg capital. Later that year, having deposed Ferdinand, they bestowed the crown on Frederick V, the elector of the Palatinate (now part of Bavaria). It was soon after this, however, that a serious dispute broke out within the Evangelical Union. Because Frederick was a Calvinist, many Lutherans withdrew their support, and Lutheran Saxony declared war against Bohemia. This serious split in the Protestant camp, together wit 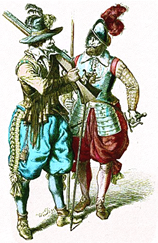 h a Spanish invasion of the Palatinate, provided the Catholics with a golden opportunity. Ferdinand, now the Holy Roman Emperor, went on the offensive. InxNovember 1620 a Catholic League army, led by the soldier Count Graf von Tilly, inflicted a crushing defeat upon the Bohemians at the Battle of White Mountain (Weisserberg), just outside Prague. Amid bloody reprisals, Protestantism was outlawed in Bohemia. This convincing victory was tempered somewhat two years later when Tilly was himself defeated by a Protestant army at Wiesloch, but by then the Evangelical Union had disintegrated and the Protestant cause had virtually run out of steam. Maximilian I, Duke of Bavaria, took over the Palatinate, and by the end of 1624 Bohemia had been forcibly returned to the Roman Catholic faith.

xxxxxThe devastation and misery caused by the first stage of this war was immense, particularly in central and northern Germany, but, as we shall see (1625 C1), it was but a prelude to a struggle that widened and became even more destructive over the next twenty years. It was not until 1648 that the Peace of Westphalia brought an end to this bloody war, a war which, for a number of reasons, was a major watershed in the long history of Europe.