xxxxxThe Inquisition, a church court, was used to seek out the “enemies of society”, such as the heretic, the alchemist and the witch. There was a wide range of punishments, culminating in death by burning. It was established by Pope Gregory IX in 1231 to deal with the Albigenses in southern France, but later it was at work throughout Europe and the New World, especially after the Spanish Inquisition, set up in 1478 (E4), and the emergence of Protestantism in the following century. By this time much of its work had been entrusted to the Dominican and Franciscan friars. Torture to extract confessions was not used until authorised by pope Innocent IV in 1252, justified by a verse in Luke's Gospel containing the word “constrain them to come in”. 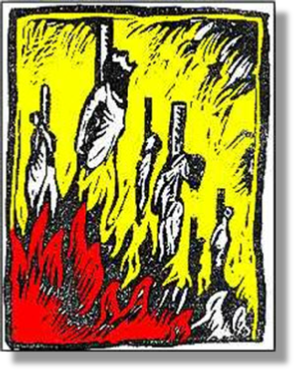 xxxxxThe church court known as the Inquisition was established to combat heresy and, later, such activities as alchemy and witchcraft. As its name implies (it comes from the Latin meaning “inquire into”), its job was not simply to deal with reported cases, but also to seek out these “enemies of society” and punish them for their misdeeds. The penalties inflicted ranged from fasting, fines and public floggings to confiscation of property and life imprisonment. In severe cases - such as those found guilty of heresy or witchcraft - the Church court, not being permitted to shed blood itself, would hand the accused over to the civic authorities for the passing of the death sentence, generally by burning at the stake. Sentence was pronounced during a religious ceremony known as the auto-da-fé.

xxxxxThe need for such a court, established by Pope Gregory IX in 1231, arose from the emergence of large-scale heretical movements, like the Albigenses in southern France. The accused would be given time to confess his or her sins and seek absolution, but if no confession were forthcoming, then witnesses would be called and, on the strength of their testimony, the verdict would be given. At first, torture was not used to extract confessions, but in 1252 Pope Innocent IV authorised the use of such persuasion, thus adding to the evil reputation of this Church tribunal.

xxxxxDuring its early years, the Inquisition was mostly limited to northern Europe, northern Italy and southern France, but, as we shall see, it became more widely used with the setting up of the Spanish Inquisition in 1478 (E4). By that time much of its work had been entrusted to the Dominican and Franciscan Orders of Friars. Later the Roman Inquisition was established to combat the growth of Protestantism, and the work of the Inquisition was extended into the Americas. 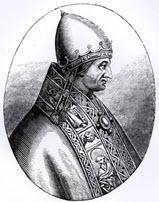 xxxxxIncidentally, Pope Innocent IV, the pope who in 1252 authorised the use of torture to obtain confessions, based his action on a verse in the Gospels which, he claimed, had been endorsed by no other than the church father Saint Augustine. The verse reads: And the lord said unto the servant, Go out into the highways and hedges and constrain them to come in, that my house may be filled. (Luke 14, verse 23). We might feel today that the weight of his argument rested on rather thin ice!

Auto-da-fé: date and artist unknown. Innocent IV: from illustration in Science and Literature in the Middle Ages by P.L Jacob (1806-1884), 1877 – fresco painting in the Basilica of St. Paul, Rome.