xxxxxThe English novelist and essayist William Makepeace Thackeray is remembered above all for his realistic novel Vanity Fair of 1848, a story centred around the ambitious, scheming Becky Sharp and her resolve to gain a place in high society. The quality of this study of social relationships, made the more penetrating by his subtle use of humour and irony, assured him a place amongst the best of British writers. His other works included the novels Pendennis and The Newcomes, The Book of Snobs, his fairy tale The Rose and the Ring, and the historical novel The History of Henry Esmond, and its sequel The Virginians. In the early 1850s he made tours of the United States, giving lectures on 18th century England, and on his return became editor of the new Cornhill Magazine. For this publication he produced his amusing essays Roundabout Papers. Much of his serious work is a study of the moneyed classes, a section of Victorian society which he depicted as being motivated by self-interest. 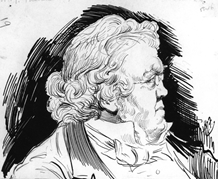 xxxxxThe English novelist and essayist William Makepeace Thackeray (1811-1863) was born in Calcutta, the son of an official in the East India Company. He attended Charterhouse public school in London, and then travelled for a while on the continent before resuming his education. He attended Cambridge University but, failing to complete the course, spent two years in London studying law before going to Paris to develop his interest in art. In 1837, however, he returned to London and, like Dickens, began his literary career as a journalist, writing magazine pieces and becoming a regular contributor to Punch. To this period, the 1840s, belongs A Shabby Genteel Story, The Yellowplush Papers (contained in his Comic Tales and Sketches of 1841), the Irish Sketchbook, and Cornhill to Cairo, all satirical and well-observed commentaries on the society of his day. 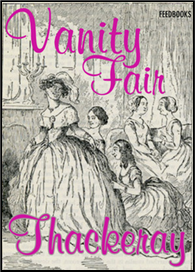 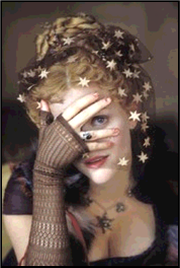 xxxxxHis first novel, The Luck of Barry Lyndon, was not an outstanding success. Produced in 1844, it traced the career of an ambitious rogue whose attempt to climb high up the social ladder ends in his downfall, a theme very much in the picaresque mode of Henry Fielding. Four years later, however, in 1848, came his masterpiece Vanity Fair, produced in serial form and, in truth, the only work by which he is generally known today. This tale is remarkable, above all, for its subtle portrayal of the central character, the ambitious and self-centred Becky Sharp (illustrated), as she attempts by amorous pursuits to reach a social position above her “station” in a society which, in itself, is dominated by self-interest and material well-being. By design, her personality contrasts sharply with that of another female character, the well-born, soft-hearted Amelia Sedley. This novel established his reputation as one of the leading exponents of the realistic novel, and assured him a place among the list of prominent British writers. 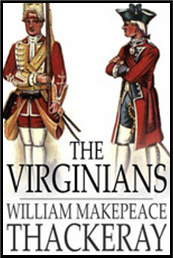 xxxxxThen in 1852 Thackeray turned to the historical novel with The History of Henry Esmond, a tale of intrigue set in England in the early years of the 18th century. Its sequel, The Virginians, begun five years later, was partly set in America. Other works included Pendennis, a story with a great deal of autobiographical content, The Book of Snobs, containing brief sketches of certain London characters, The Newcomes, a saga centred around a prosperous middle class family, and the fairy tale The Rose and the Ring of 1855. These varied works widened his public appeal, and he was seen by some as a rival in literary achievement - though not in social reform - to Charles Dickens himself.

xxxxxAn accomplished lecturer with a keen interest in the 18th century, Thackeray made visits to the United States in the early 1850s, and gave lectures on two of his works, The English Humourists of the Eighteenth Century and The Four Georges. These were well received, but he returned to London in 1856 and, four years later, became editor of the new Cornhill Magazine. It was while he was editor of this publication that he produced his satirical, amusing essays under the title Roundabout Papers. He left as editor in 1862 and began work on his last novel, Denis Duval, but he never finished it.

xxxxxFor the most part, Thackeray’s study of social relationships, made penetrating by his subtle use of humour and irony, was confined - unlike Dickens - to the moneyed classes and their striving for material advancement. He wrote in a clear prose, possessed narrative skill, and he created realistic characters - never being content with caricatures -, but his elaborate analysis of personal behaviour impeded at times his story line. Outside of his historical works and some of his essays and magazine pieces, he was a moralist, deprecating a section of Victorian society which was occupied by the “vanities” of this world, and motivated purely by self-interest. 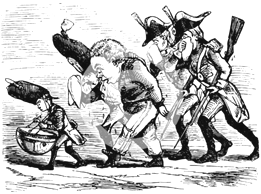 xxxxxIncidentally, Thackeray was quite an accomplished artist. He had a talent for producing amusing caricatures, and he illustrated many of his own works, notably his fairy story The Rose and the Ring (example given here). Indeed, as a young man he applied to illustrate works by Charles Dickens, but was turned down in favour of the London illustrator Hablot Knight Browne. Thackeray later became Dickens’ friendly rival, until the couple quarrelled in 1858, the result of an indiscreet remark by Thackeray about Dicken’s extramarital affair. Eventually a surprise meeting and handshake at the entrance to a London club ended the rift, but Thackeray died a few weeks later.