xxxxxAs we have seen, the Spanish adventurer Francesco de Coronado explored part of Texas in 1540 (H8), and for many years Spain ruled the area from Mexico. When the Mexicans gained their independence in 1821, they ruled over Texas but agreed to a settlement of Americans along the Brazos River, organised by the diplomat Stephen Austin. This settlement grew with the years, as did the demand for Texan independence. Fighting broke out in 1836 when a Mexican force commanded by General Santa Anna overran a small garrison which had made an heroic stand at the Alamo, a ruined chapel south of San Antonio. This was followed by the massacre of some 300 men at the town of Goliad. However, in the April, a Texan force under General Sam Houston roundly defeated the Mexicans at the Battle of San Jacinto and won Texan independence. After ten troubled years as a republic, Texas was annexed by the United States, but this led to a land dispute with Mexico which, as we shall see, sparked off the Mexican War of 1846 (Va).

THE TEXAN WAR OF INDEPENDENCE

xxxxxFor many years the area known today as Texas was sparsely populated by a number of native peoples, including the Apache and Karnakawa. As we have seen, the area was explored by the Spanish adventurer Francesco de Coronado in 1540 (H8), and in 1682 Spain made its first settlement at Ysleta, near El Paso. In the early years, Spanish occupation was mainly limited to a scattering of trading posts, but the number of colonists increased over the years, and in 1718 a major centre was founded at San Antonio. By the Louisiana Purchase of 1803 (G3c) the United States gained control over much of the northern territory, but the remainder was administered as part of Spanish Mexico until Mexico gained its independence from Spain in 1821 and Texas acquired new masters. 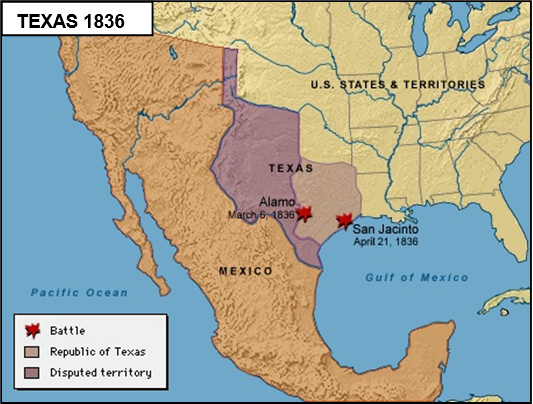 xxxxxThe seeds of future trouble were sown the following year when the political leader Stephen Austin gained permission from the new Mexican government to establish an American settlement of three to four hundred families along the Brazos River. As this community grew in size, so did the demand for Texan independence, and by the late 1820s and early 1830s the American settlers, together with the local population, were growing increasingly hostile towards Mexican rule. An open conflict became inevitable after 1833, when General Antonio Lopez de Santa Anna, a man who thrived on military glory, assumed the Mexican presidency.

xxxxxDecember 1835 saw the start of the War of Texan Independence when a small force of volunteers attacked San Antonio and, driving out the Mexican garrison there, took over “the Alamo”, a former Franciscan chapel which occupied an exposed position and was partially in ruins. (so called because it was in a cottonwood grove, alamo in Spanish). From a military point of view, the site was 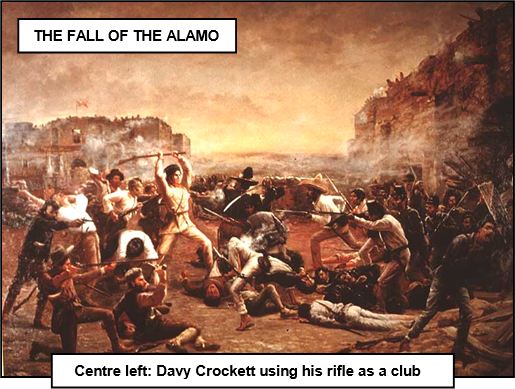 virtually untenable, particularly with a force which numbered less than 200, but despite dire warnings from leading Texans, the detachment opted to stay. Santa Anna’s large force, estimated at about 4,000 men, arrived in February 1836, and at once laid siege to the Alamo. Incredibly, the small number of Texans held out for thirteen days before a breach was made in the outer wall and the make-shift fortress was overrun. Save for a few women and children, all the survivors were slain. Mexican losses during the engagement were high and almost certainly exceeded a thousand. As for the Alamo itself, the building was later restored and is today maintained as an historic site.

xxxxxAmongxthose killed defending the Alamo were two frontiersmen famed for their daring and courage in the cause of Texan independence: Jim Bowie (1796-1836) and Davy Crockett (1786-1836), “King of the Wild Frontier”. Bowie’s name has lived on by dint of the stout hunting knife he invented - though it might have been the work of his brother Rezin - and the colourful character Crockett, who spent much of his time as a politician, became a legend in his own life time for his bear hunting and Indian fighting. 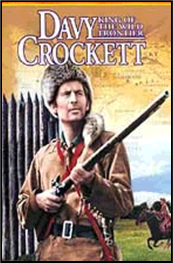 xxxxxThe attempt to defend the Alamo was a foolhardy operation in the military sense, and one that was doomed to failure. However, the heroic stand made by this small group of volunteers proved of immeasurable value as a symbol of Texan resistance. Indeed, it was during the height of this battle that Texas officially declared its independence. Furthermore, the length of the siege did give the Texan leader, General Sam Houston, time to assemble his army for the inevitable showdown with Santa Anna. Before this came about, however, another incident strengthened further the resolve of the Texan rebels. Axfew weeks after the fall of the Alamo, a small force of some 300 men, made up of American and Texan troops, was surrounded by a large Mexican 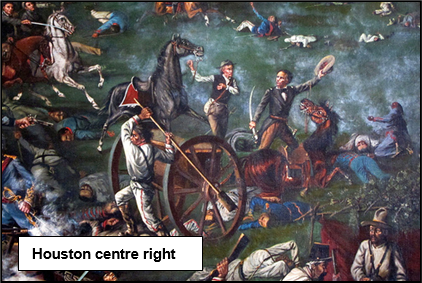 detachment at Goliad, a town about 80 miles south-east of San Antonio. Their commander agreed to surrender on the understanding that his men would be treated as prisoners of war, but, once captured, Santa Anna ordered their execution, and all the men were shot on the 27th March 1836.

xxxxxThe decisive battle took place the following month at the Battle of San Jacinto (illustrated). The Mexican general Santa Anna, having moved his army eastward to the San Jacinto River, confronted the Texan army by the middle of April 1836. Outnumbered two to one, the Texans, commanded by General Houston, were forced to retreat for a number of days, but on the 21st they turned and made a surprise attack upon the Mexican position. With the war cry, “Remember the Alamo, remember Goliad”, they swept over their enemy, killing about 600 and capturing some 700, including Santa Anna himself. It is said that Houston lost only six men.

xxxxxThe Battle of San Jacinto won for the American settlers in Texas, and for the indigenous peoples of this land, their independence from Mexico. From then until 1845 Texas was a republic with Sam Houston as its president, but during those ten years there were constant raids from Mexico, and the state was beset with money troubles. As a result the vast majority of Texans favoured annexation by the United States and this came about in 1846. But, initially, this stirred up further trouble. A land dispute then arose between Mexico and the United States and, as we shall see, sparked off the Mexican War of 1846 (Va). 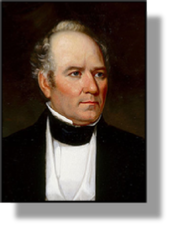 xxxxxIncidentally, the site of the Battle of San Jacinto is not far from Houston, the city named after Sam Houston (1793-1863) (illustrated), the US general who won independence for Texas, and became its first president. After Texas joined the Union in 1846, he was a senator for the state of Texas 1846 to 1859, and then governor until 1861. The city of Houston was the state capital for a brief period, but was then replaced by Austin in 1839, named after Stephen Austin (1793-1836), the diplomat who, in the 1820s, founded the American settlement in Texas which began the struggle for independence. ……

xxxxx…… GeneralxAntonio López de Santa Anna (1824-1855) the Mexican dictator who led the fight against the Texan rebels, was taken to Washington after he was captured and seen by President Andrew Jackson. He was allowed to return to Mexico to take his retirement but instead, as we shall see, took a conspicuous part in the Mexican War of 1846 to 1848. ……

xxxxx…… Itxwas during the time of the Texas Republic, 1836 to 1845, that the famous Texas Rangers were set up to guard the frontiers and protect the country against Indian attacks. A body of tough, armed men, they rode long distances to take on and repel raiding parties. It was they who made the six-shooter Colt revolver, invented by the American gunsmith Samuel Colt in 1835, the weapon of the Wild West. Virtually a law unto themselves, their exploits now form part of Texan and American folklore.

The Battles of the