xxxxxAs we have seen, during the Wars of the Roses, begun in 1455 (H6), the Earl of Warwick had supported Edward, and, dubbed “the King Maker”, had played a large part in securing him the throne. In 1470, however, after a bitter quarrel with Edward, he freed Henry VI from the Tower of London and restored him to power. Edward fled to Holland, but the following year, 1471, he returned to England, seized Henry VI, and then defeated Warwick's army at the Battle of Barnet. The battle, fought on Hadley Green, first went in favour of the Lancastrians, but eventually the centre and right flanks of the Yorkist army cut through the enemy's lines. The Lancastrians fled from the battlefield, and Warwick was killed in the retreat. This was a decided victory for Edward but, as we shall see, his throne was still far from secure.

xxxxxAs we have seen, during the Wars of the Roses, begun in 1455 (H6), the Earl of Warwick, dubbed “the King Maker”, had been a most loyal supporter of Edward, and had played a large part in securing him the throne. In 1470, however, he turned traitor following a bitter quarrel over his diminishing role as Edward's advisor. He freed the demented Henry VI from the Tower of London and restored him to power. Edward was obliged to flee to Holland, but there he received the help of his brother-in-law, Charles of Burgundy, and the promise of support from his brother, Richard, Duke of Gloucester. 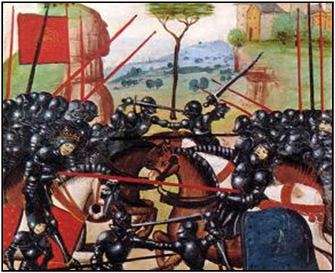 returned to England in March 1471 and, advancing on London, recaptured Henry VI. He then moved his sizeable army near to Barnet, north-west of London, and met up with Warwick's forces making for the capital. The battle was fought around Hadley Green on April 14th. The Yorkists attacked at first light. The left flank of their army was virtually destroyed in the first assault, but the centre and right flank cut through the Lancastrians and quickly put them to flight. The victory was made the sweeter for Edward by the death of Warwick during the hasty retreat. Had he survived the battle he would have remained a constant threat to the House of York. 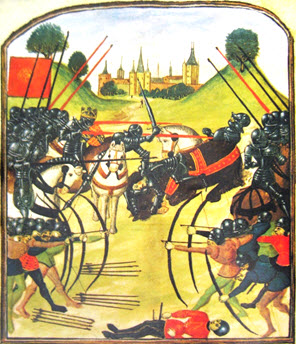 xxxxxIt was on the day of the Battle of Barnet that Margaret of Anjou, wife of Henry VI, landed at Weymouth in Dorset, together with her son Prince Edward. Her army, about 3,000 in number, made straight for the north with the aim of mustering support in Wales. However, King Edward, anxious to meet up with her force before it became much bigger, moved his army rapidly across England by a series of forced marches and on May 3rd managed to intercept the Lancastrians near the town of Tewkesbury in Gloucestershire. When the battle took place the following day, the Lancastrians had taken up a strong defensive position, but it was decided - perhaps unwisely - that part of the force should launch a surprise attack. It failed, and the Yorkists, taking advantage of the enemy's depleted numbers, penetrated their ranks and caused them to retreat in disorder.

xxxxxAmong the thousand or so men who were killed in the battle were a number of leading Lancastrians, including Prince Edward himself. Margaret of Anjou was captured and imprisoned until 1475, when her freedom and return to France was secured by the payment of a large ransom. It is said that she died in poverty. Less than three weeks after the battle, Henry VI, a prisoner in the Tower of London, was murdered, and Edward’s hold on his crown was at last secure. There then followed a brief respite from the battles and the skirmishes of the Wars of the Roses, but, as we shall see, the final conflict was yet to be fought in 1485 during the reign of Richard III.

xxxxxWhile the Battle of Barnet was being fought, however, Henry VI's wife, Margaret of Anjou had landed at Weymouth, in Dorset, with an army of some 3,000. She made for the North, aiming to muster support in Wales, but Edward, by a series of forced marches, caught up with her at Tewkesbury in Gloucestershire. At the ensuing battle the Lancastrians, despite their strong defensive position, decided to launch a surprise attack. It failed and they were forced into a disorderly retreat. Margaret's son, Prince Edward, was killed, and she herself was captured. Henry VI was again imprisoned in the Tower, but was murdered a few weeks later. Edward's throne was at last secure, but the fighting between Lancaster and York was far from over. As we shall see, the final battle was not fought until 1485 in the reign of Richard III.