xxxxxAs we have seen, it was in 1824, having already conquered Arabia and northern Sudan (1820 G4), that the Egyptian leader Muhammad Ali joined the Sultan in his fight against Greek independence, and was forced to withdraw his troops following the intervention of the Russians, British and French in 1827. Undaunted, in 1831 (W4) he took on the Sultan himself. His son Ibrahim occupied part of Syria by 1833 and then, by the Battle of Nizip in 1839 soundly defeated the Ottomans and gained control of their fleet. Again, this proved too much for the Great Powers. Anxious to maintain the Ottoman Empire, they landed an army in Syria in 1840 and forced the Egyptians to quit the country. The following year, however, Muhammad Ali was made hereditary leader of Egypt and Sudan, a dynasty which remained in power until 1953. Apart from his military escapades, Muhammad Ali introduced a large number of reforms at home in an attempt to modernise his country, introducing new cash crops and sending Egyptians abroad to learn industrial skills. His harsh, centralised regime, and his tight grip on the economy, hindered progress, but his domestic policy brought order out of anarchy, and helped to lay the foundations of an independent, modern Egypt. 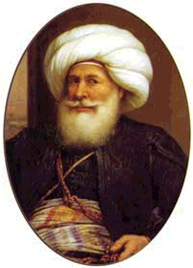 xxxxxIt was after the French and British had left Egypt at the turn of the century, that Muhammad Ali, an Albanian officer serving with the Ottoman forces, fought his way to power. In 1805 he was recognised as the country’s viceroy by the Sultan, and he then embarked upon a policy of expansion. He gained control of Arabia in 1818, and then occupied northern Sudan in 1820 (G4). Then four years later he went to the aid of the Sultan, sending an army to Greece to put down the Greek fight for independence, started in 1821(G4). Such was his success that the Russians, British and French came out in support of the Greeks, defeated a Turko-Egyptian fleet at the Battle of Navarino in 1827 (G4), and forced him to withdraw his army.

xxxxxThis was a setback for the Egyptian leader, who had hoped to make more territorial gains, but it was not an end to his ambitions. In 1831 he felt strong enough to take on his suzerain, the Sultan himself, and in that year his son Ibrahim invaded Syria, a country which had been part of the Ottoman Empire since 1516. In an opening campaign, waged over two years, Ibrahim occupied the country as far north as Adana and, with the aid of local leaders, set up his own government, based at Damascus. Thenxin a second campaign, begun in 1838 to consolidate his power, he won a decisive victory over Ottoman troops at the Battle of Nizip (in south-east Turkey) the following year, and this resulted in the surrender of the entire Ottoman fleet at Alexandria. 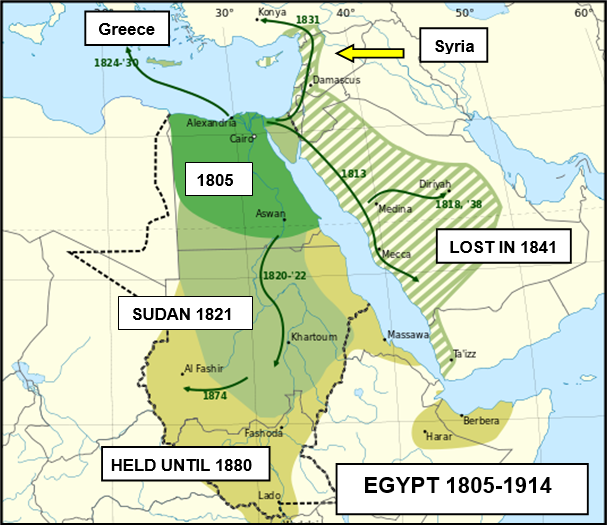 xxxxxBut once again, the extent of this conquest was a step too far for the Great Powers’ peace of mind. In July 1840, Britain, Austria, Prussia and Russia, fearing that a collapse of the Ottoman Empire would bring about a dangerous power vacuum throughout the Middle East, intervened and agreed to put an end to Egyptian rule in Syria (arrowed on map). After ordering Muhammad Ali out of the country, an army made up of British, Austrian and Ottoman troops landed on the Syrian coast, stirred up a revolt, and forced the Egyptians to withdraw. Syria was spared Egyptian rule, but once again found itself within the Ottoman Empire. For Muhammad Ali, this second withdrawal, again forced on him by the Great Powers, was a further blow to his plans for an expansion of personal power. However, he was consoled to some extent the following year when the Sultan granted him and his family the hereditary right to govern Egypt and the Sudan. It was the start of a dynasty that was to remain in power until 1953.

xxxxxAs we have seen, Muhammad Ali spent a great deal of his long reign seeking international fame via military adventures, but on the domestic front he proved an able and far-seeing administrator. Whilst he kept a tight grip on government in order to remain in power, he also introduced an extensive programme of reforms, some of which had a lasting effect. In a genuine attempt to modernise his country, he encouraged the arrival of Europeans to teach both agricultural and industrial skills, and he sponsored schemes abroad so that Egyptians might study more advanced methods of production and marketing. His attempt to introduce the means by which Egypt’s raw materials could be processed at home met with little success - mainly due to the lack of industrial power and the necessary expertise - but his introduction of more profitable cash crops, such as cotton, brought long term dividends.

xxxxxIn general, it must be said, his reform programme was not a great success. His harsh, centralized regime stifled initiative within his civil administration, and led to a number of peasant revolts and rebellions within the army. In particular, his strict control over the economy, plus an overall lack of a sound middle management, put a brake on commercial enterprise. Despite these shortcomings, however, his domestic policy brought order out of anarchy and did make a start in laying the foundations of an independent modern Egypt, though the transformation was to be some time in the making.

xxxxxIncidentally, soon after becoming Pasha of Egypt in 1805, Muhammad Ali began rebuilding Alexandria, and, as part of his modernisation programme, organised the building of a new canal - 45 miles long - linking this port with Cairo. Completed in 1820, it is estimated that some 20,000 labourers l 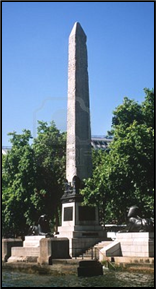 ost their lives during the construction! ……

xxxxx…… Itxwas Muhammad Ali who, in 1819, presented one of the “Cleopatra Needles” to the United Kingdom to commemorate the victories of Lord Nelson at the Battle of the Nile, and of Sir Ralph Abercromby at the Battle of Alexandria in 1801. Because the British government would not meet the cost of transport, it remained in Alexandria until 1877, when it was shipped to England, paid for by a wealthy London surgeon. Unfortunately, the pontoon designed to carry it foundered during a storm in the Bay of Biscay. Six of the crew lost their lives and the “vessel” had to be repaired in Spain before completing its journey to Gravesend. The obelisk (68ft high) was finally erected on the Thames Embankment in London in August 1878. …… 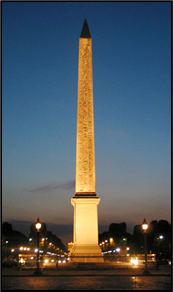 xxxxx…… The “needle” was one of a pair named as belonging to the legendary Queen Cleopatra VII of Egypt. In fact, they originally stood in the Egyptian city of Heliopolis, built on the orders of Phararoh Thutmose III around 1450 BC. They are made of rose-coloured Syrene granite, and weigh close on 200 tons. The famous pharaoh Ramses II had them inscribed to commemorate his military victories, and they were taken to Alexandria by order of the Roman Emperor Caesar Augustus in 14 B.C. The second obelisk (1ft taller) was presented to the United States by Muhammad Ali’s grandson, Ismail Pasha. The cost of transporting it was met by the railroad tycoon William Vanderbilt and, unlike the London needle, it arrived without mishap and was erected in Central Park, New York, in February 1881.

xxxxxThere are about 30 large obelisks across the world. Two of the most famous are the one in the centre of the Place de la Concorde in Paris (illustrated above), a gift to France by Muhammad Ali and erected in 1836, and the one in Rome, brought there by the Romans in about 37 A.D. and finally placed in the centre of St. Peter’s Square in 1586. ……

xxxxx…… The London needle was later flanked by two mock Egyptian sphinxes made in bronze. In the First World War, during the first German air raid on London on the 4th September 1917, a bomb landed near the obelisk and did superficial damage to the right-hand sphinx. To commemorate the event, the damage was never repaired! 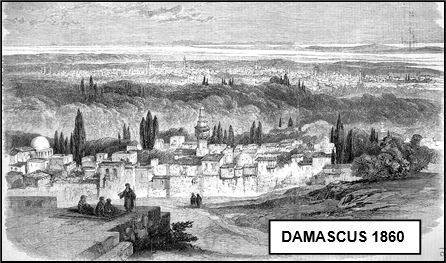 xxxxxAs for Syria, the withdrawal of the Egyptians meant that the country returned to being a group of Ottoman provinces. From then until the collapse of the Ottoman Empire in 1918, its history was one of slow decline, made worse by the economic, racial and religious tensions brought about by the growth of European influence within the country. In 1860, for example, troubles in neighbouring Lebanon sparked off a massacre of Christians by a mob of Muslims in Damascus. Nor did independence come at the end of the First World War. By the secret Sykes-Picot Agreement of 1916 France was charged with the control of the country, and this led to a number of national uprisings against the French over the next twenty years. Eventually in 1936 the principle of Syrian independence was recognised, but the Second World War then intervened and it was not until April 1946, in fact, that Syria finally gained its independence.