xxxxxThe idea of building a canal in Egypt was by no means new. An irrigation channel from the Nile Delta to the Red Sea had been built as early as the 19th century BC, and expanded by the Egyptians and Romans. It was abandoned, however, in 775, and it was the Venetians in the 15th century - wishing to regain their place as a major trading nation - who put forward the idea of a canal linking the Mediterranean and Red Seas to replace the route round the Cape of Good Hope. But this and like proposals never materialised, and when Napoleon invaded Egypt in 1878 he turned down the project for being too expensive. In 1846, however, a survey showed that locks were not necessary in making the canal, and in 1854 the French diplomat Ferdinand de Lesseps and the Khedive of Egypt agreed to start the project. A Suez Canal Company was formed, and work began in 1859 to construct a 100 mile waterway from Port Said to the Gulf of Suez, making use of three lakes. At first labour was by hand, but later dredgers and steam shovels were used. The canal was eventually opened to shipping in November 1869 (Vb). It proved such a success that the British, who had opposed its building, were pleased to snap up the Khedive’s shares in 1875 and gain a controlling interest in this short-cut to the Far East. From then onwards Britain was to play a vital role in Egypt and its international waterway. As for de Lesseps, he became involved in the construction of the Panama Canal in 1881 (Vc), but this time met with failure.

Map (Egypt): from www.worldtrek.org/odyssey. Map (Suez Canal): declared to be in the public domain – commons wikimedia.org/wiki/File:Suez+Canal.  Drawing  from The  Young Person’s  Cyclopedia of Persons and Places. 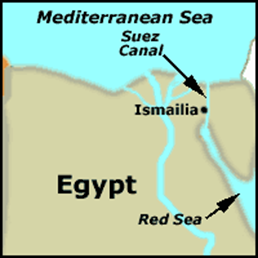 xxxxxThe idea of building a canal to join the Mediterranean and Red Seas was by no means the first attempt at building an artificial waterway in Egypt. It would seem that as early as the 19th century BC an irrigation channel, navigable at times, was built linking the Nile River to the Red Sea, and this was widened by Ptolemy II during his reign (285 to 246 BC). The Romans extended this waterway and, during the rule of the Roman Emperor Trajan (98-117) it became known as “Trajan’s Canal”. It was used for some years after this by the Arabs, but it gradually became silted up, and in 775 it was deliberately filled in by Caliph Abu Jaafar Abdullah al-Mansur to prevent it being used as an invasion route.

xxxxxBut these early attempts had been made simply to assist trade from the Nile Delta to the Red Sea. It was the Venetians who, at the close of 15th century, were among the first to suggest the possibility of making a canal through the isthmus itself, linking the two seas. Their trade had been badly affected by the opening of the Cape route to India, and they sought a shorter route to the Far East which worked to their advantage. They began negotiations with the Egyptians, but the Turkish conquest of Egypt in 1517 put an end to their scheme. But the idea did not go away. As we have seen, the German philosopher Gottfried Leibniz suggested the idea of a maritime canal across the isthmus to Louis XIV. Nothing came of it, but interest in the proposal was very much awakened in 1798 following Napoleon Bonaparte’s invasion and occupation of Egypt. He ordered a feasibility study, but the project was abandoned when the French survey team concluded - wrongly as it so happened! -  that the level of the Red Sea was some 30 feet above that of the Mediterranean. (A finding not accepted, incidentally, by the French scientist Pierre-Simon de Laplace.) 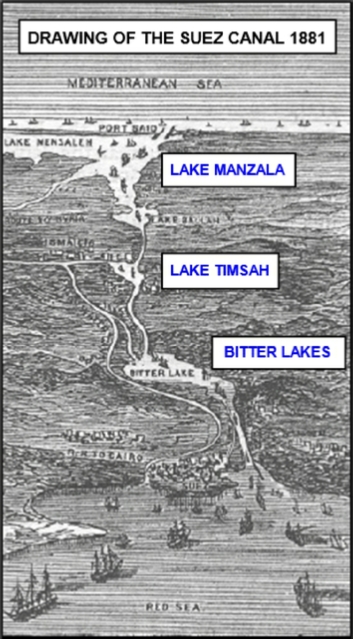 xxxxxThis miscalculation on the part of the French set the project back by close on half a century. It was not until 1846, in fact, that further surveys were made by a French society interested in the project and it was confirmed that no locks would be required. The society’s scheme never materialised, but it was at this stage that the French diplomat Ferdinand de Lesseps appeared on the scene. Captivated by Napoleon’s dream of such a canal, he had already made plans as to how it could be built. In reality, he saw little or no prospect of these plans ever leaving the drawing board, but in 1854 fate took a hand. In that year Prince Said of Egypt, whom de Lesseps had known well while serving as a diplomat in Cairo, came to the throne of Egypt. In a matter of months the two friends had agreed to build the canal. In 1858 the Universal Company of the Maritime Suez Canal was given the right to construct and operate the canal, but with the proviso that, after 99 years of operation, ownership would revert to the Egyptian government. The design of the canal and the supervision of its construction was to be in the hands of the French promoter Ferdinand de Lesseps.

xxxxxDe Lesseps was anxious that the joint stock company should be truly international, but there were few takers. France and the Ottoman Empire ended up with 96% of the shares, and many counties, including Britain, Russia, Austria and the United States, showed no interest at all. Indeed, Britain, openly opposed the scheme, fearing that it would increase French influence in world trade. Lord Palmerston let it be known that his government considered that the canal was a physical impossibility, and the Scottish engineer Robert Stephenson declared the scheme quite impracticable. He and the British government were to change their mind once the canal was up and running!

xxxxxThe artificial waterway, just over 100 miles long and located at the crossroads of Europe, Africa and Asia, was planned to run from Port Said on the Mediterranean Sea to the Gulf of Suez in the south, thereby avoiding the journey around the Cape of Good Hope and cutting the distance from London to Bombay, for example, by no less than 42 per cent. The route followed a straight line, using three bodies of water, Lake Manzala, Lake Timsah and the Bitter Lakes (see map above), and, apart from the lakes, several passing bays were provided. The low lying Nile delta was situated to the west and a higher, desert area - the Sinai Peninsula - to the east. The original width of the canal was fixed at 200 feet, and the maximum depth 24 feet, but these modest dimensions were to be significantly enlarged over the years. A railway was to be built along the west bank, parallel to the canal for its entire length. 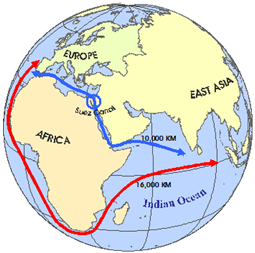 xxxxxThe work on the canal began in April 1859, with the first spadeful of sand removed near the site of Port Said. Some 20,000 labourers were employed, but progress was not rapid, and it took four more years to complete than envisaged, work being slowed down by the soft nature of the terrain, the harsh climate, and a cholera epidemic in 1865. At first, the digging was done by picks and shovels, and the sand or fine earth taken away in baskets - often by peasants working as forced labour -, but later dredgers and steam shovels were brought in, operated by Europeans, and this speeded up the work process.

xxxxxThe  canal  was opened  to  shipping  in  November 1869 (Vb), marked by an elaborate ceremony at Port Said. The cost of completing this monumental project was more than double the original estimate, and the company struggled to survive in the first few years. However, its international value was eventually appreciated, even by the British. In 1875 when money troubles forced the Khedive of Egypt to sell his shares, prime minister Benjamin Disraeli was quick to snap them up on behalf of the British government and thus gain a controlling interest in the Suez Canal. From then onwards Britain was to play an important role in Egypt and its vital short-cut to the Far East. As for Ferdinand de Lesseps, he was destined to be involved in the construction of another vast waterway - the Panama Canal in 1881 (Vc) - and, this time, to meet with failure.