xxxxxAs we have seen (1324 E2), under Mansa Musa, its most successful leader, the Mali Empire stretched across a vast area of West Africa, and via the city of Timbuktu, commanded the lucrative caravan routes across the Sahara. With his death around 1335, however, the empire went into decline and the Songhai Empire, once subdued by the Mali, slowly reasserted itself. Eventually, in 1464 its able leader Sonni Ali seized Timbuktu and Djénné, another well-placed trading centre, and then expanded his control across much of the region. As we shall see (1512 H8), it was left to his successor, Askia Muhammed I, to bring the empire to its greatest size and the height of its power. 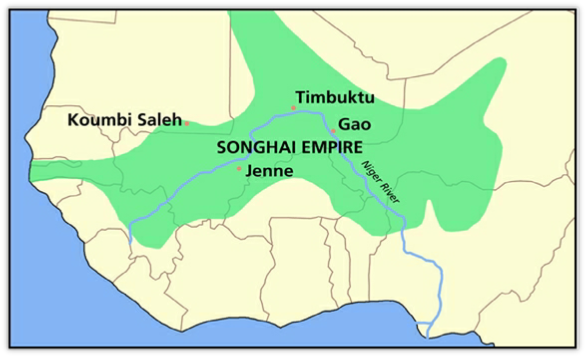 1230’s that Sundiata, one of the leaders of the Malinke people in West Africa, won a decisive victory over the Susu clan and took over their ailing kingdom. Within a few years he had consolidated his rule and formed what came to be known as the Mali Empire. In 1240 he razed the capital city of Kumbi Saleh, thus destroying the last vestige of the ancient Kingdom of Ghana. In the space of the next hundred years this empire become one of the largest empires of the day. As we have seen (1324 E2), under Mansa Musa, its most successful ruler, it stretched over modern Senegal, Gambia, Mali and southern Mauritania, and controlled the caravan trade routes which crossed the Sahara via Timbuktu, a thriving commercial city and a centre of Islamic culture. But following the death of Mansa Musa, around 1335, the empire slowly went into decline, its size proving too much for its political and military strength.

xxxxxIt was at this time that the Songhai Empire, once overshadowed by its powerful Mali neighbour, began to re-assert itself, centred around the wealthy trading city of Gao. By 1464, when its ruthless but able leader Sonni Ali came to power, the time was ripe for expansion. The opportunity came in 1468, when the Muslim leaders of Timbuktu sought his help to overthrow the Tuareg, a nomadic people who had occupie 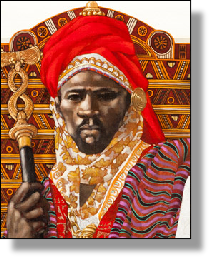 d the city following the fall of the Mali. Sonni Ali (illustrated) was not a man to let slip such an opportunity. He occupied Timbuktu, threw out the Tuareg, and then decided to stay. He murdered most of the inhabitants and then, having started to restore the city's trading potential, moved against and eventually captured the equally well-placed trading centre of Djénné. Having restored the lucrative trade which crossed the Sahara from the forest lands of the south to the coast of North Africa, he then expanded his territory into Mali and spent the rest of his reign subduing and pushing back the local tribesmen, notably the Mossi, Fulani and Tuareg.

xxxxxAs we shall see (1512 H8), it was left to the next leader, Askia Muhammed I, to conquer the remaining lands once occupied by the Mali and then extend the empire into regions of modern Nigeria. Under his rule the Songhai reached the height of their power, and they remained the dominant force in the area until the coming of the Moroccan army - equipped with firearms - towards the end of the sixteenth century.