The ancient English folk custom known as the Dunmow Flitch has its beginning in the Priory of Little Dunmow in Essex, England, in 1104. It is said that in that year the Lord of the Manor, one Roger Fitzwalter, together with his wife, dressed up as humble peasants and begged the Prior for his blessing exactly one year and a day after their marriage. He was so impressed with their devotion that he presented them with a flitch of bacon (about half a pig). Fitzwalter then revealed his true identity and agreed to give his land to the Priory on condition that a flitch was awarded to any couple who could claim that they were sincerely devoted to each other throughout that period of time. And so the custom began. The English poet William Langland mentions it in his book Piers Ploughman in 1362, and Geoffrey Chaucer refers to the Dunmow Flitch Trials in his tale The Wife of Bath some thirty years later. It was not until 1445, however, that an official record was kept of those who “took home the bacon”, and in 1832 the trials were transferred to the nearby town of Great Dunmow. Today, they are held every four years.

Mention is made of the first artesian well in Europe, at Artois in France. Hence the name given to this type of well. 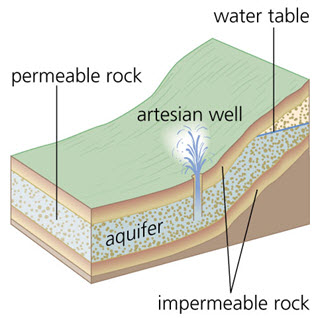