xxxxxIt was while working as a surveyor in the building of canals that the English geologist William Smith realised that layers of rock could be identified by the fossils contained within them. After carrying out research across the whole of the country, in 1815 he published his geological map of England, Wales and part of Scotland. The first of its kind, this was a milestone in the study of the earth’s crust, and the dating of the past. He later produced geological maps of 21 counties. For this work, spanning over twenty-five years, he became recognised as the founder of stratigraphical geology, and in 1831 was awarded the first Wollaston Medal of the Geological Society of London. 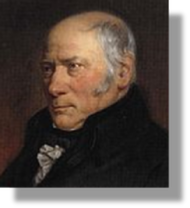 xxxxxIt was while working as a canal surveyor, in charge of excavations, that the English geologist William Smith came to realise that layers of rock could be identified by the fossils contained within them. Over a period of some twenty-five years, he made a close study of the rock strata across the whole country, and in 1815 published his impressive geological map entitled A Delineation of the Strata of England and Wales, with Part of Scotland (illustrated below). The first map of its kind, it was drawn to a scale of five miles to the inch and determined the succession from the Carboniferous to the Cretaceous period. He then went on to publish a number of small volumes on the identification of strata by fossils, and in 1824 completed a brilliant series of coloured geological maps covering 21 counties.

xxxxxSmith was born in Churchill, Oxfordshire, the son of a blacksmith. His only formal education was acquired at the village school, but he taught himself the rudiments of surveying from books, and he showed an early interest in the fossils he collected from the nearby Cotswold Hills. By the age of 18 he was working as an assistant surveyor in Stow-on-the-Wold, and it was at this time that he began to take an interest in the order of strata. In 1791 he was tasked with making a survey for a proposed canal near Bath in Somerset, and from this he progressed to working for the Somerset Coal Canal Company. 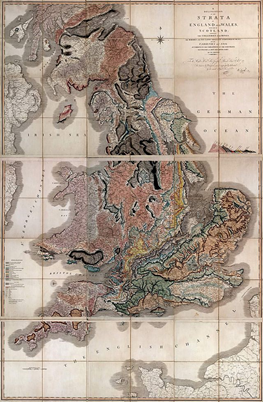 xxxxxThe excavation work which he was then required to supervise enabled him to make a close study of the strata revealed, and the fossils which each stratum contained. In 1794, on a nationwide trip to examine canals and collieries, he noted that the rock formation he had observed in Somerset - made up of so many “slices of bread and butter” - was to be seen across the whole country, each layer identifiable by its own peculiar fossils. From 1799 onwards Smith worked for himself, and built up a prosperous business as a civil engineer in Bath. His work took him to various projects throughout the country, including drainage work, and this gave him the opportunity to compile the first national geological survey.

xxxxxIn 1804 he established an office in London and set about collating his findings. After publishing his maps and catalogues, however, he fell into debt. The economic depression that followed the end of the Napoleonic Wars caused the failure of a business venture in Somerset, and he had no capital to fall back on. His publications earned him little, and over the years he had spent the bulk of his money financing his own research. He lost his London property, spent over two months in a debtor’s prison, and had to sell his fossil collection to the British Museum. In 1820 he departed for Yorkshire and eventually settled in Scarborough, finding employment as a land agent on the estate of a friend. He died in 1839 while travelling to a scientific meeting in Birmingham. 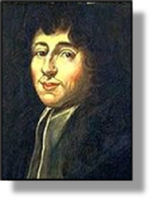 xxxxxSmithxwas not the first to recognise the basic principles of stratigraphy - the study of the arrangement of rock strata. As early as the 1660s the Danish Catholic bishop and geologist Nicolaus Steno (1638-1686) (illustrated) had come to realise that a chronological history of the Earth’s crust could be deciphered by an examination of the strata and their fossil remains. Then In 1727 his fellow countryman and geologist John Strachey (1671-1743) had produced his Observations on the Different Strata of Earths and Minerals, based on a study of rock structure and the strata found in Somersetshire coalfields. And just a few years earlier, in his publication of 1812, the French zoologist George Cuvier had related fossils to rock strata, and produced the first classification.

xxxxxNonetheless, Smith’s outstanding contribution to this branch of science was in the geological maps he produced, particularly his 1815 version (illustrated above). Crude though this was - and understandably so - it set the style and standard for future versions, and proved a milestone in the study of the Earth’s crust and the dating of the past. A number of the names he then applied to the strata, such as London Clay and Purbeck Beds, are still in use today, as are many of the techniques he introduced.

xxxxxIt was on the basis of his tireless and diligent research, together with the maps he produced, that he has come to be regarded as the founder of stratigraphical geology. In 1831, in recognition of his contribution in this field, he was awarded the first Wollaston Medal of the Geological Society of London, and a year later was granted a government pension.

xxxxxIncidentally, in addition to a vast amount of work on canal and colliery projects, he supervised the reclamation of land in Wales and Norfolk, and was responsible for the restoration of the hot springs at Bath. During his career he was often known as “Strata Smith”. ……

xxxxx…… The Map that Changed the World (referring to the map of 1815), written by the British-born American writer Simon Winchester and published in 2001, centres on the important part played by William Smith in the birth of modern geology.

Smith: by the French painter Hugues Fourau (1803-1873), c1835. Map: published by Smith in 1815 – copy on display at Burlington House, the headquarters of the Geological Society of London. Steno: by the Flemish court painter Justus Sustermans (1597-1681) – Uffizi Gallery, Florence.