xxxxxThe extraordinary Sixth Crusade gained a large measure of success without a sword raised in anger. This was almost entirely due to Frederick II (1194-1250), the German king and Holy Roman Emperor. In 1228 he travelled to the Middle East and actually negotiated a favourable settlement with the Egyptian Sultan, Al-Kamil. By its terms, Jerusalem, Bethlehem and Nazareth were given back to the Christians, and Frederick himself was crowned King of Jerusalem the following year. It is true that the Muslims took back these cities fifteen years later, but it was still an outstanding piece of diplomacy. Meanwhile in Europe, however, his designs on Italy had made him an enemy of the Pope. He had excommunicated the Emperor and launched a crusade against his Italian possessions! Frederick was obliged to return home to defend his territory and quell unrest in his own kingdom. Despite his liking for war, he was a cultured man of the Renaissance and his court became a centre of artistic and scientific excellence. 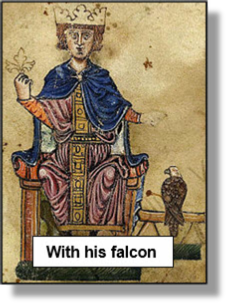 xxxxxThe Sixth Crusade was a most extraordinary affair. No fighting was involved, but a large measure of success was achieved, due almost entirely to the diplomatic skill of the German Emperor Frederick II (1194-1250). He had delayed his departure for a number of years, but in 1228 he embarked for the Middle East and met the Egyptian Sultan Al-Kamil. The treaty he then negotiated gave Jerusalem, Bethlehem and Nazareth into the hands of the Crusaders, and Frederick was himself crowned King of Jerusalem in 1229. It was an outstanding piece of diplomacy, and although the treaty did not survive the test of time - the Muslims recaptured Jerusalem in 1244 - the Christians did regain their Holy City for some fifteen years, and for much of this period they were treated with tolerance by their Muslim neighbours.

xxxxxIronically enough, Frederick received no thanks for his efforts, quite the reverse. Because he had taken so long in organising and leading his Crusade - to fulfil a promise he had made at his coronation - the Pope promptly excommunicated him and, in his absence, actually launched a crusade against him, attacking his possessions in Italy. He was obliged to hurry back to defend his Italian lands, a task which occupied him for much of his remaining life. 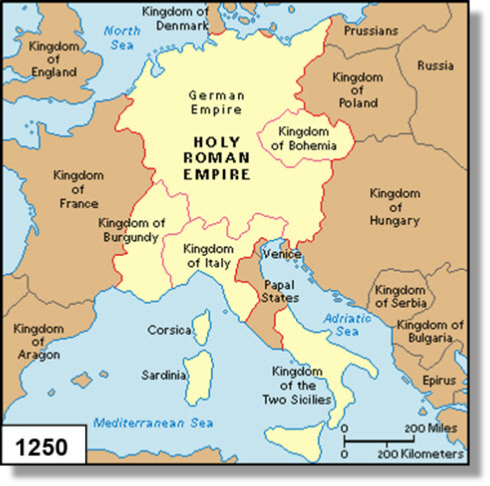 xxxxxBut the Pope's opposition to Frederick was hardly surprising. The Emperor was bent on bringing both Sicily and Italy within his empire and this meant an almost constant battle with the Papal States and the city states of northern Italy, united in the Lombard League. These Italian wars placed an enormous strain on the Empire. Quite apart from the financial burden they imposed, they led to serious unrest within Germany, and for some years Frederick's right to the throne was challenged. When he died suddenly in 1250, such had been his impact on the affairs of the time, that many would not accept his death and believed that he had been hidden away in a volcano or some mountain cave, destined to return and save the Empire in a future hour of need!

xxxxxDespite much time spent in battle and dispute, Frederick was a cultured, intelligent man and some have even seen him as a pioneer of the Renaissance. It is certainly true that he had a genuine interest in the pursuit of knowledge and, once having consolidated his rule in Sicily - where he spent his childhood - his court became a centre of artistic and scientific excellence. Among the subjects studied were philosophy, astrology, algebra, medicine, poetry and natural history. Indeed, none other than Dante described this court as the birthplace of Italian poetry. And the Emperor himself was the author of a standard work on falconry. In addition, he played a large part in the drawing up of an impressive code of laws for his kingdom, and was responsible for some very fine architecture.

xxxxxIncidentally, it is said that, following the return of Jerusalem to the Christians - the result of his successful negotiations with the Sultan of Egypt during his crusade - the Emperor came to regard himself as a new Messiah or King David. He likewise compared his own entrance into the city of Jerusalem in 1229 - on his way to receive the crown - with the entry of Christ into the city on Palm Sunday.

xxxxxYou will recall that the First Crusade was called for in November 1095 (W2) and proved a resounding success. Deeply troubled by the advance of the Seljuk Turks in the Middle East and the loss of Syria and Palestine to the infidel, the Christian kingdoms of Western Europe amassed a large army and by July 1099 had recaptured the Holy City of Jerusalem and set up four Christian states in the area, the largest being the Kingdom of Jerusalem. This was the high-tide of Christian success and it was never to be reached again over the next 800 years and more. 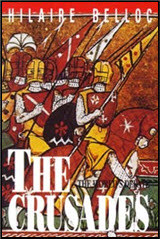 xxxxxThe Second Crusade got off to a promising start in 1147 (ST), led by the French and German kings, but it ended in failure and humiliation. The German army was virtually annihilated on reaching Anatolia, and the French force, having suffered heavy loses on the way, failed to capture Damascus and decided to return home.

xxxxxBy the time of the Third Crusade in 1189 (R1), the Muslims had become united under the leadership of their able leader Saladin and were a force to be reckoned with. When Jerusalem fell to the Muslims in 1187 it was inevitable that the West would send a military expedition. On the face of it, this force was a powerful one, led by the kings of Germany, France and England. But what they had in strength they lacked in unity. The Germans went their own way and returned home when their king, Barbarossa, died in Anatolia. The French and English argued over strategy until Philip Augustus, more concerned with the defence of his own territories in Europe, took his army back to France. By negotiating a peace settlement with Saladin, Richard I did manage to retain a Latin Kingdom in a slither of land along the Palestinian coast, but Jerusalem remained firmly in the hands of the Muslims.

xxxxxThe Fourth Crusade was a crusade in name only. It started out with high hopes in 1202 (JO) but, becoming embroiled in Venetian politics, it ended up attacking and sacking Constantinople and replacing the Christian Byzantine Empire with a Latin Kingdom. This survived for less than sixty years and made no contribution to the cause of the Crusaders.

xxxxxIn 1209 (JO) a crusade was launched within Europe. Directed at the Albigensians (or Cathars), a religious sect in southern France which posed a threat to orthodox views, thousands of these heretics were killed and much damage was done to the local economy during a campaign which lasted for more than twenty years. Those who did survive eventually became victims of the Inquisition. And it was during this campaign, in 1212 (JO), that the tragic event known as the Children's Crusade was carried out.

xxxxxThe Fifth Crusade, beginning in 1217 (H3), and led by Andrew of Hungary, was directed towards Egypt. It was argued that if Cairo could be captured and then control secured over the Sinai peninsula, the Muslims to the north would be cut off from the support and - equally important - the vital grain supplies that they received from Egypt. It was doubtless a sound strategy, but the Crusaders were too weak to put it into practice. They failed to take Cairo and when promised reinforcements never showed up, they were forced to surrender up Damietta, captured earlier, and abandon the expedition.