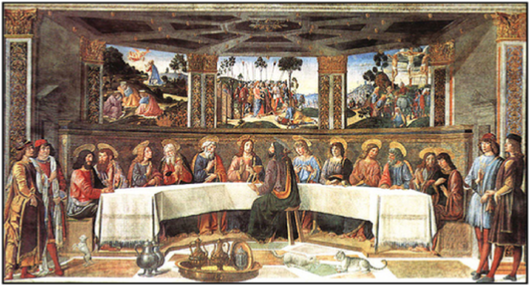 building of the Sistine Chapel in the Vatican Palace in Rome, was begun in 1473 by the Italian architect Giovanni dei Dolci, and completed in 1481 for the then Pope, Sixtus IV - from whom the chapel takes its name. Having the same proportions as those of Solomon's temple in the Old Testament, it was built to serve as the Pope's private chapel and also to be used by the Sacred College of Cardinals for the election of a new pope when a vacancy occurred.

xxxxxRectangular in shape and with six arched windows along the two main sides, the interior walls and barrel-vaulted ceiling were then decorated with magnificent frescoes. On completion of the building, Sixtus IV invited to Rome the most talented artists of the day, and they spent the next two years painting the side walls of the chapel with fourteen scenes depicting the life of Christ and Moses. Among the artists honoured for this singular undertaking (along with one of their frescoes) were Botticelli (Temptation in the Wilderness), Perugino (Christ Giving the Keys to Saint Peter), Pintoricchio (Moses and Zipporah), and Cosimo Rosselli and his son-in-law Piero di Cosimo (The Last Supper - illustrated above - in which the three windows in the background illustrate the events to come – the Mount of Olives, the Betrayal, and the Crucifixion.

xxxxxAs we shall see (H7), the two giants of the Italian Renaissance, Michelangelo and Raphael, were to add immeasurably to the beauty of the Sistine Chapel, and in this great upsurge of artistic talent, the genius of Leonardo da Vinci was yet to come to full fruition.

xxxxxIncidentally, when a new Pope is being voted into office, people waiting in St. Peter's square soon know when one has been appointed. The cardinals vote by secret ballot twice a day, and after each vote the papers are burned in the chapel's stove and the smoke from the fire passes up a pipe and can be seen outside. When none of the candidates receives the required majority, the votes are burned using wet straw, so the smoke is black. When a pope is elected, the votes are burned with dry straw and the smoke is seen to be white.

xxxxxThe Florentine painter Piero di Cosimo (1462-1521), who assisted Cosimo Rosselli in painting the Sermon on the Mount and the Crossing of the Red Sea (and from whom he derived his name) went on to produce some imaginative mythological scenes, such as the weird and remarkable Satyr mourning over a Nymph in the National Gallery, London. This work - shown in part here - is thought to illustrate a tale from Ovid.

xxxxxA recluse and an eccentric, much of his work is characterised by strange shaped human figures and animals, and his lively imagination made him particularly skilful at producing designs for festivals and masques. He painted, it would seem, for his own pleasure, and is reported to have claimed that he could well gain inspiration for his work from the stains on a wall! It is also said that during his life time he eat nothing but hard-boiled eggs, but this seems an unlikely story. Shown below is The Forest Fire and the more conventional The Immaculate Conception.

xxxxxThe building of the Sistine Chapel was begun in 1473 and completed in 1481. Having the same proportions as those of Solomon's temple, it was built as the pope's private chapel and for the election of a new pope when a vacancy occurred. The side walls are painted with 14 magnificent scenes depicting the life of Christ and Moses. Among the artists honoured for this work were Botticelli, Perugino, Pintoricchio, Cosimo Rosselli, Piero di Cosimo, and Ghirlandaio. Later, as we shall see (H7), contributions were to come from two giants of the Italian Renaissance, Michelangelo and Raphael.

xxxxxAnother artist who worked on the Sistine frescoes was Domenico Ghirlandaio (1449-94). Yet another painter from Florence, he was given the task of representing the Calling of Peter and Andrew (illustrated below). An interesting feature is the inclusion of a group of Florentines in the picture, ostensibly as witnesses to the biblical event. He often did include in his works portraits of people he knew, but in this particular case it might well have been a pointed reference to a feud then going on between Florence and Sixtus IV in which the pope was accused of supporting a conspiracy to murder the Medici family, then rulers of the city. 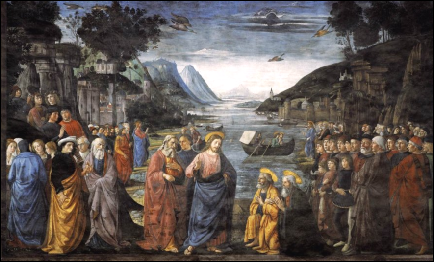 xxxxxGhirlandaio went on to produce a large number of decorative narratives for family chapels in Florence. Notable are the six large frescoes depicting scenes from the life of Saint Francis in the church of Santa Trinita (three illustrated below), and the series painted for the Medici banker Giovanni Tornabuoni showing episodes from the life of the Virgin Mary and John the Baptist. He was also a competent portrait painter, noted for his lovely portrait of the beautiful young Giovanna Tornabuoni. But perhaps his fame rests mainly on the fact that Michelangelo trained for a while in his workshop. It is said that the talented youngster was due to spend three years as an apprentice but left after a year, having nothing more to learn!

xxxxxApart from his fresco in the Sistine Chapel representing the calling of Peter and Andrew, the Florentine artist Domenico Ghirlandaio (1449-94) produced a large number of decorative narratives for chapels in Florence, including six depicting the life of St. Francis and a series showing episodes from the lives of the Virgin Mary and John the Baptist. He was also a competent portrait artist. Michelangelo trained in his workshop for a while, leaving early on the grounds that he had nothing more to learn!

xxxxxIncidentally, Ghirlandaio derived his name from the fact that his father, a goldsmith, was particularly good at making silver wreaths for ladies' head-dresses and so was nicknamed “the garland maker”.