xxxxxThe Norman Simon de Montfort arrived in England in 1230. He was soon a prominent member of court and became even more so when he married King Henry's sister, Eleanor in 1238. For many years he remained totally loyal to his brother-in-law, but in the 1240s they fell out over money and the government of Gascony (part of the Duchy of Guyenne), then in Montfort’s hands. As a result, in 1258 he supported the barons when they drew up the Provisions of Oxford, aimed to reduce the power of the monarchy. When, in 1261, the king reneged on these provisions, Montfort was invited to head a revolt against the king. Under his leadership the barons won a resounding victory over Henry at the Battle of Lewes on the Sussex coast in 1264. Both the king and his son Edward were captured and imprisoned. The way was open for reform by an “uncrowned king of England”, but as we shall see (1265), it was to be reform at a price. 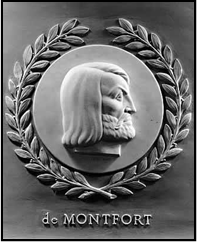 xxxxxSimon de Montfort, as his name suggests, was a Frenchman from Normandy, the son of the Simon de Montfort who had been one of the leaders of the bloody Albigensian Crusade in 1209. He arrived in England in 1230 and was soon a prominent member of the royal court, having been granted the earldom of Leicester - once held by his grandmother - and, with Henry’s blessing, having gained the hand in marriage of the king's sister Eleanor in 1238. For many years, despite a great deal of unrest among his fellow barons, he remained totally loyal to his king and brother-in-law. Indeed, he was resented if not openly disliked by many of the English nobility, being seen as yet another of the king's foreign favourites.

xxxxxIn the 1240s, however, Simon and Henry fell out, probably over money matters, and, for a time, Montfort retired to his estates in France. On his return they made up their differences, but the relationship was never the same again. The final break came a few years later when the King, having appointed Montfort as governor of the English province of Gascony (part of the Duchy of Guyenne), questioned his methods and began an inquiry into his rule. Once more, Montfort retired to France but, this time, there was to be no reconciliation.

xxxxxBy the mid 1250s the king's continued incompetence as a ruler, and the growing burden of taxation on all classes, made a revolt inevitable. In 1258 Montfort threw in his lot with the barons and they made Henry agree to the Provisions of Oxford, which included a list of do’s and don’ts and the setting up of a committee of barons to make sure he didn’t do the don’ts. In 1261 Henry revoked the Constitutions and, once again, a disenchanted Montfort retired to France; but not for long. In a short time he was invited back by the barons to lead them in the fight against the king. In 1264, under his leadership, the barons won a resounding victory against their monarch at the Battle of Lewes on the Sussex coast. Both the king and his son Edward were captured and imprisoned. The way was now open for reform by an “uncrowned king of England”. As we shall see (1265), it was to be reform at a price.