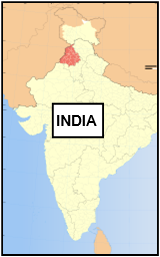 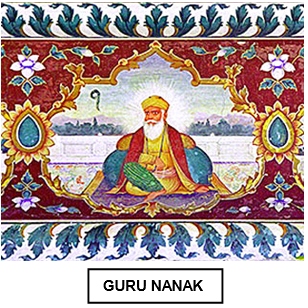 religion made up of both Islamic and Hindu influences, was founded in the Punjab, north-west India, around the year 1499 by its first Sikh (prophet) Nanak. The movement's recognised spiritual leader, he was followed by nine other gurus (teachers). With the assassination of the last guru in 1708, the spirit and teaching of Guru Nanak was continued in the religion’s holy book, the Granth Sahib, a collection of hymns by the ten gurus. Sikhism teaches that all people are able to reach God by meditating on the divine nature of creation. 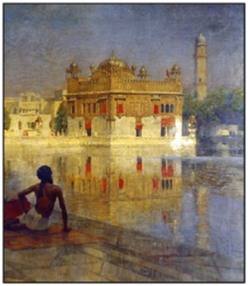 kept secure in the Golden Temple, built by the fourth Guru Ram Das after he founded the city of Amritsar in 1577. The Temple, covered in gold leaf, is situated on an island in the “Pool of Immortality” - the meaning of the word Amritsar. It was the last guru, Gobind Singh who established the company of the faithful, the Khalsa (meaning “pure”). The Khalsa wear the five Ks - kes (long hair), kangha (a comb), kirpan (a sword), kachh (short trousers) and kara (a steel bracelet). The men adopt "Singh" as their last name (meaning lion) and the women “Kaur” (meaning princess). Festivals in remembrance and honour of the ten “human” leaders often contain a complete reading of the Granth Sahib, and a number of Hindu festivals are also celebrated, adapted where necessary to conform to particular Sikh beliefs.

xxxxxAfter 1708 the Sikhs suffered persecution from their Mughal rulers, and in 1839, following the death of one of their most able leaders, Ranjit Singh, the Sikh kingdom virtually fell apart. As we shall see the British then moved into the area and after two short wars (1845 and 1848) annexed the Punjab in 1849 (Va). It was to be a long time before the Sikhs were to gain any measure of independence.

the Sikh symbol shown here sums up their creed. The inner circle represents their “Wonderful Lord”, who has no beginning or end; the two swords on either side depict the spiritual and temporal powers; and the double-edged sword in the centre illustrates the fighting spirit of the saint and the soldier.

xxxxxSikhism, an Indian religion influenced by both Islam and Hinduism, was founded in the Punjab, north-west India, in 1499 by its first prophet Sikh Nanak. He was followed by nine other gurus (teachers), but when the tenth was assassinated, the religion's teaching was continued in the holy book, the Granth Sahib. This sacred text is kept in the Golden Temple in the city of Amritsar, founded in 1577. In the 18th century the Sikhs were persecuted by the Mughals, and in 1839, at the death of their able leader Ranjit Singh, the kingdom virtually fell apart. As we shall see, after two short wars (in 1845 and 1848) the British annexed the Punjab in 1849 (Va), and put an end to Sikhs' hopes of independence for many years.