xxxxxJean Sibelius, Finland’s greatest composer, had a deep love of his homeland and was a fervent nationalist. His compositions of the 1890s, mainly based on Finnish folklore and mythology, did much to enhance the popular desire for freedom from Russian rule. Among his works during this period were his Kullervo (an immediate success), his Karelia Suite of 1893, and his two compositions of 1899, his First Symphony and his majestic symphonic poem Finlandia. The last named aroused such a surge of patriotism that it was banned by the Russian authorities. But these works, musical reminders of Finland’s beauty and heritage, were not his only claim to fame. From 1911 onwards he searched for symphonic perfection. Regarding the symphony as a means of expressing music for its own sake, he devised a “mosaic style” whereby a pattern of melodic fragments were expanded and eventually transformed into complete melodies. He perfected this style in his 7th Symphony, composed in 1924. Sibelius paid visits to a number of European capitals, including London, and he visited the United States in 1914, but he spent most of his life at his villa just north of Helsinki, and he ceased composing in 1929. Apart from his seven symphonies, he wrote a number of small pieces for solo instruments and orchestra, choral and chamber music, songs, and incidental music for 13 plays, including Shakespeare’s The Tempest. 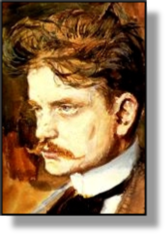 xxxxxJean Sibelius, Finland’s greatest composer, was born in Hämeenlinna, about 60 miles north of Helsinki, the son of an army surgeon. He began learning to play the piano and violin at the age of nine, and the following year wrote his first composition Water Drops, a piece for violin and cello. Although his family spoke Swedish, he was sent to a Finnish-speaking 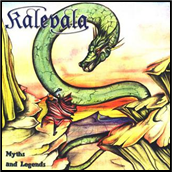 school - the first to be established under Russian rule - and this had a profound effect upon his future outlook. It was here that, studying Finnish literature, he came into contact with the Kalevala, a work of epic poetry made up of Finnish folklore and mythology. This inspired him with a love of his homeland, and was to prove a powerful source of inspiration, especially throughout the early years of his musical career.

xxxxxIn 1885 Sibelius attended Helsinki University to study law. At the same time, however, he also took a course at the Helsinki Music Institute (today known as the Sibelius Academy), and his progress there convinced him that his future lay in music. In a short while he gave up law in order to study the violin and composition. He composed a quantity of chamber and instrumental music at that time, but he harboured hopes of becoming a violin virtuoso. However, on leaving the Conservatory in 1889, assisted by a government grant, he went on to study counterpoint in Berlin and orchestration in Vienna, and this convinced him that his future lay as a composer. 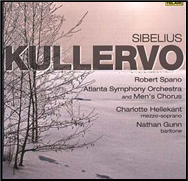 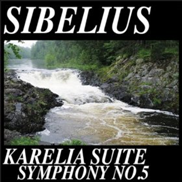 xxxxxOn returning home in 1892 Sibelius taught theory at Helsinki Conservatory until a state pension, granted in 1897, enabled him to devote all his time to composition. It was during this period, the closing years of the century, that Sibelius used his talent to the service of his county. Dedicated to Finland’s freedom from Russian rule, he composed a number of works which, based mainly on the epic Kalevala, captured the popular demand for national independence. His first piece, written for soloists, choir and orchestra and performed in Helsinki in 1892, centred around the tragic mythical figure of Kullervo and was an immediate and sensational success. It was followed later in the year by his orchestral tone poem En Saga. Then in 1893 came his evocative Karelia Suite, compiled for a patriotic pageant given by students of Helsinki University, and, in 1895, his Four Lemminkainen Legends, two of which, The Swan of Tuonela and Homeward Journey, proved highly successful and established him as his country’s leading composer. But the movement for national independence was given particular momentum by his two works of 1899. For his fellow Finns, the music of his First Symphony, romantic in tone, captured the natural beauty and grandeur of Finland, whilst his majestic symphonic poem Finlandia - written for a fund-raising pageant in support of Finnish independence - succeeded even more in arousing nationalist sentiment. Such was its patriotic impact that it was banned by the Russian authorities. Even so, it became the country’s unofficial national anthem and it made Sibelius a national hero. 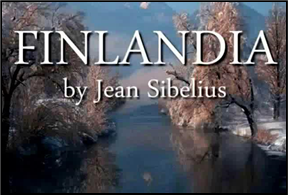 xxxxxThese compositions of the 1890s were written in the Romantic tradition, and show some evidence of Tchaikovsky and Bruckner. His symphonic poems in particular reflect the intense nationalism to be found in his music. He was inspired not only by Finnish legends and folk songs - captured in rhythm and melodic patterns - but also by a deep love of his country’s natural beauty, seen as majestic and ever changing.

xxxxxBut there was another side to his music. In many of his later works he searched for symphonic perfection. His seven symphonies, all highly individual, mark him out as an innovator in symphonic form and style, and therein, in fact, lies his greatest claim to fame as a composer. From his 4th Symphony onwards, produced in 1911, he introduced his own format in which music was composed not as means of description (“programmatic”) but simply for its own sake - music first and last. He maintained, that a symphony should be a self-contained entity wherein the themes are made up of a pattern of melodic fragments, - perhaps two or three notes at the start - which, though meaningless in themselves, are capable of being integrated, expanded and eventually transformed into complete melodies. He described this style as “mosaic”, originating as it did from a pattern of short motifs or “cells”. A symphony’s justification, he told Mahler in 1907 - his rival in composition - was “the profound logic that created the inner connection between all the motifs”. His definitive concept of the symphony culminated in his 7th Symphony of 1924, in which the four conventional movements were fused into one, and a total unity of musical expression was developed from one single theme or motif. It is thought that, at one time, Sibelius contemplated an eighth symphony, but it would seem, in fact, that he was content to leave his Seventh to serve as his final statement on symphonic reform. 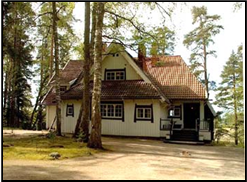 xxxxxBy the turn of the century Sibelius had become a national legend, living with his wife and family at his country villa, Ainola, 25 miles north of Helsinki (illustrated). He was valued and admired in his native Scandinavia, and had found favour in Britain and the United States, but in Europe his work was not widely performed, and his later ideas on symphonic reform were viewed with some scepticism. He conducted a number of concerts in Europe, made several visits to England, and he went to the United States in 1914 to conduct the first performance 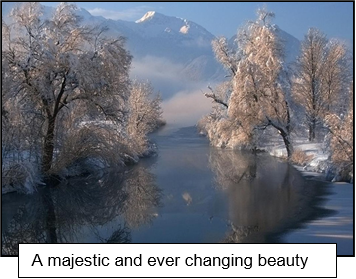 of his tone poem The Oceanides (The Sea Nymphs) at the Norfolk Chamber Music Festival. It was on that occasion that he was awarded a doctorate degree by Yale University. In 1929, however, he suddenly stopped composing, and he then spent the rest of his life virtually as a recluse, passing his time reviewing and revising his works. He died of a brain haemorrhage in September 1957 at the age of 91. He is remembered today for his impact as a nationalist composer - inspired by the beauty and heritage of his homeland - and, above all, for the influential developments he made in the structure of the symphony and the symphonic poem. 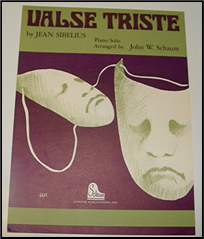 xxxxxSibelius’ other works included a number of small pieces for solo instruments and orchestra, choral and chamber music, songs, and incidental music for 13 plays, including Shakespeare’s The Tempest. Worthy of special mention are his Romance in D-flat major for piano and his Concerto in D minor for Violin and Orchestra of 1903, his weird Valse Triste of 1904 (which, in its day, made him better known than Finlandia), and his string quartet Voces intimae of 1919. His three symphonic poems, Pohjol’s Daughter of 1906, Luonnotar of 1913 and his final major work Tapiola of 1926, were inspired, like a number of his earlier compositions, from the myth and legends of the Kalevala.

xxxxxIncidentally, the Karelia Suite, a work of three movements, was particularly well received by the Finnish people. The region of Karelia, a beautiful land of forest, field and lakes where Sibelius spent his honeymoon, is situated along Finland’s eastern border with Russia and over many years had become a symbol of the country’s struggle for independence and national identity. ...…

xxxxx……xA monument to Sibelius, the work of the Finish sculptor Eila Hiltunen, was unveiled in Sibelius Park, Helsinki, in 1967. Abstract in form, it consists of some 600 hollow steel pipes, welded together in a wave-like pattern. The work was not without its critics.x……

xxxxx……xSibelius was baptised Johan Julius Christian, but at the age of 20 he chose to adopt the name Jean, and he was known as this throughout his professional career. He married Aino Järnefelt in 1892, a staunch nationalist, and they had five daughters. ……

xxxxx……xFollowing the October Revolution in Russia in 1917, Finland seized its independence. After a brief civil war, a German prince, Frederick Charles of Hesse, was elected king, but the country became a republic in 1919 following the defeat of Germany in the First World War. All seemed settled but, sadly, Finland’s days of foreign occupation were far from over.