xxxxxAs we have seen, it was in 1192 (R1) that Yoritomo introduced the shogunate, a regime whereby hereditary feudal lords governed Japan, and the emperor became a mere figurehead. The most powerful dynasty was the Tokugawa family, in power from 1602. Under their strong rule Japan had long periods of peace and prosperity, but with the coming of the “barbarians” - traders from the United States and Western Europe - opposition to the shogunate grew. The Treaty of Kanagawa, forced on the Japanese by the U.S. naval officer Commodore Matthew Perry in 1854 (Va) opened Japan to overseas trade, and then a number of other countries gained “unequal” trade agreements by threatening or using force. In response a number of clans - notably the Choshu, Satsuma and Tosa - took up arms against the Shogun in order to stop the influx of foreigners. In the Boshin War that followed they forced the abdication of the shogun, Yoshinobu, and restored imperial power in 1868. The Emperor Meiji and his advisors then accepted the foreign traders and embarked on a rapid programme of modernisation and expansion. As we shall see, they won a decisive victory over China in the Sino-Japanese War of 1894 (Vc), and by the early 20th century had made Japan a world power. Having lost their status, disgruntled Samurai took up arms against the emperor in 1877, but the so-called Satsuma Rebellion was crushed the following year.

THE SHOGUNATE ENDS WITH THE RETURN OF IMPERIAL POWER  1868  (Vb) 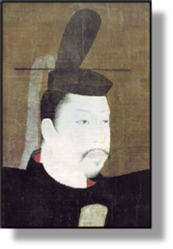 xxxxxAs we have seen, it was in 1192 (R1) that Minamoto Yoritomo (illustrated), having gained a decisive victory over the rival Taira family, established a new power-base for the government of Japan. It was then that he founded a military government at Kamakura and introduced the shogunate system, a regime whereby hereditary feudal lords (shoguns) governed the entire country, and the emperor became a mere figurehead. It was this form of government which, despite family feuds and long periods of civil war, survived until well into the nineteenth century. The Minamoto clan provided these military strongmen until 1219, and was followed by the Ashikaga (1336-1573) and the Tokugawa (1602-1868). By this time the shogunate, or bakufu as it is sometimes known, had extended its control over all aspects of government.

xxxxxThe Tokugawa shogunate, with its headquarters at Edo (today’s Tokyo), by its strict class hierarchy and its military-bureaucratic structure, provided Japan with its most powerful form of government to date. It had complete control over the emperor and his court for the vast majority of its years, and an exceedingly firm grip on the 250 or so major landowners (the daimyo). Whilst they enjoyed a large measure of local power, they were required to spend a stipulated time at Edo, and those who were thought to pose a risk to the state were obliged to leave a close member of their family at the capital as a guarantee of good behaviour! They also paid a fealty, and were often given expensive public works to finance in order to stop them from becoming too wealthy. The Shogun himself had full executive power, and complete say over legislation and land administration. The result was a long period of peace and stability during which the Genroku era in particular, from 1688 to 1704, saw a marked increase in prosperity, along with a marked improvement in the development of the arts, crafts and theatre.

xxxxxAt first Europeans were welcomed, but this quickly changed, and by 1650 the vast majority had been killed or expelled. But this policy of isolationism (known as Sakkoku) was brought to an abrupt end by the U.S. government in 1854 (Va). A naval squadron under the command of Commodore Matthew Perry virtually forced the shogunate to accept the terms of the Treaty of Kanagawa. As we have seen, this opened several ports for trade, and soon a number of European nations had claimed similar trading rights. The agreements they reached - often achieved at the threat of naval bombardment - were extremely unfavourable to Japan and, by giving certain rights to foreign nationals, encroached upon Japan’s sovereign power. They rightly became known as the “unequal treaties”. 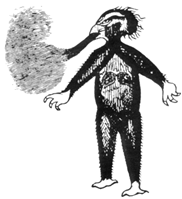 xxxxxThis influx of foreigners provided the catalyst for change in Japan. Already there was growing opposition to the Tokugawa shogunate. Taxes on the peasantry were set at a fixed amount, regardless of inflation, and this meant that the income of the major Samurai landowners, the daimyo, was being increasingly eroded. They offset their losses by cutting the rice stipend (their method of payment) and this brought growing discontentment among their retainers, the lower ranks of the Samurai, many of whom, by now, were bureaucrats rather than full-time warriors. The feeling of anger aroused was not sufficient in itself to mount a challenge to the established order, but the arrival of the foreign trader and its economic and political consequences, easily tipped the balance towards rebellion. White men were seen as yang guizil, hairy, fire-breathing monsters.

xxxxxThe slippery slope to civil war and the overthrow of the shogunate began in the early 1860s when opposition to the invading “foreign devil” turned into direct action. The majority of the daimyo and many of the middle and lower ranks of the samurai took up the slogan Sonno joi (“revere the emperor, repel the foreigner”), and there was an increasing number of attacks upon Europeans. The response was predictable. In 1862, following the murder of a British subject, the British bombarded the city of Kagoshima, and the following year, when the leader of the militant Choshu ordered an attack upon foreign ships in the Shimonoseki Strait, a combined western fleet attacked the clan’s coastal fortifications and imposed a heavy fine. But these attacks proved a turning point. In 1866 the Choshu and Satsuma clans joined forces with the declared aim of restoring imperial power, and they were reinforced later by the support of the Tosa and Hizen domains. At the same time, however, the shogun began modernising his army and navy with European help. The French in particular played a large part in advising on the use of weaponry and military tactics. 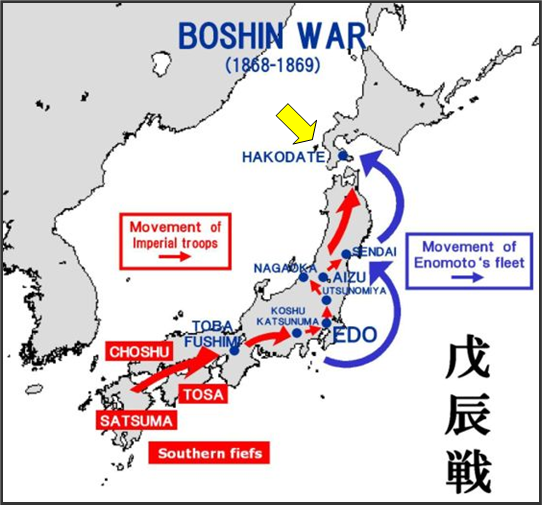 xxxxxThexinevitable clash came in 1868 with the outbreak of the Boshin War (meaning “War of the Year of the Dragon”). It did not prove much of a contest. The shogun, Yoshinobu, seized the initiative by launching a campaign to seize the imperial court at Kyoto, but his army was routed at a battle outside the city. The imperial forces, on the other hand, although outnumbered three to one, advanced northwards and, capturing Edo without a fight, forced the surrender of Yoshinobu (1837-1913). What was left of the Tokugawa army and their French advisors - led by Admiral Enomoto - retreated to the northern island of Hokkaido and set up the Ezo Republic, but it was short lived. Atxthe Battle of Hakodate, (arrowed on map), fought on land and sea and ending in May 1869, the imperial forces won a resounding victory and put an end to the 250 year old Tokugawa shogunate. In the meantime, the fifteen-year old Mutsuhito, having come to the imperial throne in January 1867, moved into the Tokugawa castle at Edo, and renamed the city Tokyo, the “Eastern Capital”. He chose the imperial title Meiji, meaning “enlightened government”, and in many respects - but by no means all - his reign, lasting until 1912, lived up to that title.

xxxxxThexMeiji Restoration was to bring big changes in Japan, most of them for the better. Once in power, the young emperor and his advisors abandoned their opposition to foreign influence within Japan - seeing it as a short-term means of learning from Western civilization - and embarked upon an astonishingly rapid programme of political reform and modernisation. In 1871, for example, the “Minister of the Right”, Iwakura Tomomi, was appointed to take a group of state officials on a fact-finding trip to the West. The 50 members of this Iwakura Mission were tasked with studying all aspects of European and American culture, including medicine, science, technology and education. It was almost two years in duration and was followed by other, somewhat smaller, fact-finding missions.

xxxxxAnd with this new found strength was to go a policy of expansion. As we shall see, the defeat of China in the Sino-Japanese War of 1894 (Vc), ending in the Treaty of Shimonoseki, was to demonstrate only too clearly that in all aspects Japan was fast emerging as a world power.

xxxxxDue in large measure to the enlightened statesmanship of Saigo Takamori, a prominent leader in the new imperial government, those samurai who had fought on behalf of the shogun were shown a surprising degree of clemency. When the feudal system was abolished and universal conscription was introduced in 1872, they were pensioned off, and many were given posts of authority within the new regime. However, there were those samurai who resented losing their role and livelihood and took up arms in protest. 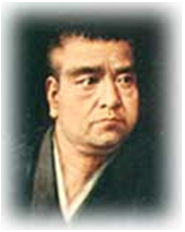 The biggest revolt, and literally the last uprising of the samurai in Japan, was that known as the Satsuma Rebellion in 1877-1878. Thisxconflict, which lasted six months and involved some 40,000 samurai, was led by Saigo Takamori (1828-1877) (illustrated), the man who had commanded the imperial army and accepted the surrender of Edo in the Boshin War. Against such a force, the Emperor’s troops, many of them conscripts, were hard pressed, but they were much larger in number - estimated at 300,000 - and equipped with modern weapons. In February 1877 Saigo besieged the city of Kumamoto, but by the end of six weeks only about 400 of his men had survived the constant attacks. Hexwithdrew to Kagoshima where the samurai made their last stand at the Battle of Shiroyama. It is said that to avoid capture Saigo committed seppuku, the traditional form of suicide, or had one of his men cut off his head. However, as his head was never found the legend grew up that he had escaped death and would return one day to continue his fight against injustice. Regarded by the people as a man who personified the samurai virtues, the imperial government pardoned him in February 1889. 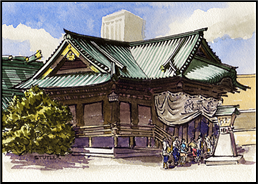 xxxxx…… The Yasukuni Shrine (meaning “Pacifying the Nation”) was constructed in Tokyo in June 1869 to commemorate those who died in the Boshin War, estimated at 3,500. It later became the principal national shrine in remembrance of Japan’s war dead.

The Boshin War and