xxxxxThomas Sheraton was one of the foremost English furniture designers. Only one piece can be attributed to him with certainty, but his reputation was based on his illustrated catalogue entitled The Cabinet Maker and Upholsterer’s Drawing Book, completed in 1794. He set up his workshop in London in about 1790, and became known for his elegant inlaid furniture in the neo-classical style. His name is particularly associated with the rectangular chair back. His Drawing Book, in which he borrowed somewhat from the designs of both Thomas Chippendale and his contemporary and rival George Hepplewhite, had a marked effect on furniture design both in Britain and North America. 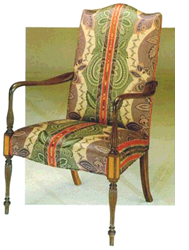 xxxxxThe accomplished English furniture designer Thomas Sheraton was born in Stockton-on-Tees, Durham. It would seem that he had little or no schooling, and was apprenticed to a cabinet maker at an early age. He began work in London around 1790, setting up shop in Wardour Street, Soho, and living on the premises. Only one piece of his work as a cabinetmaker has been authenticated (a glass fronted bookcase) but his prolific designs - many noted for their grace and simplicity - were described and illustrated in the books he published. Prime amongst these was his The Cabinet Maker and Upholsterers’ Drawing Book, made up of four volumes and completed in 1794. In this work, his colour plates and their accompanying notes, in particular, amply testify to his ability as a draftsman, and the depth of his technical knowledge. 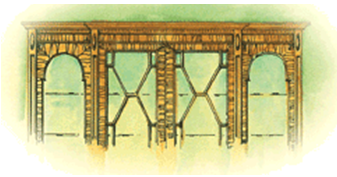 xxxxxHis elegant inlaid furniture was neo-classical in style and noted, above all, for its square and rectangular forms. Indeed, his name is particularly associated with the rectangular chair back. In his initial designs, decoration was generally confined to simple geometrical patterns, but he later introduced elaborate Greco-Roman devices and these tended to detract from the refinement of his earlier design pieces. Towards the end of his career, during which he often found difficulty in making ends meet, he supported himself mainly from his writings. A somewhat eccentric and unpredictable man, he was ordained a Baptist minister in 1800, and three years later produced a treatise entitled Discourse on the Character of God as Love.

His Drawing Book, which doubled up as a trade catalogue, greatly influenced both British and American furniture design well into the next century. In compiling it, he borrowed to some extent from the works of his predecessor Thomas Chippendale and his contemporary George Hepplewhite - whose work, nonetheless, he disparaged in the preface.

The English cabinetmaker and designer George Hepplewhite (c1727-1786) set up business in London in 1760 (thirty years before Sheraton arrived in the capital), but it was not until 1788, two years after his death, that he gained fame with the publication of his Cabinetmaker and Upholsterer’s Guide. This provided a catalogue of neo-classical designs aimed at improving the quality and style of household furniture. Much of his work was decorated with classical motifs and floral designs - features then being used by the English interior designer Robert Adam - and he became particularly well-known for his chairs, distinctive by their slender frames and their heart, shield or oval shaped backs. Like Sheraton, his illustrated catalogue greatly influenced both British and American furniture designers well into the next century.

xxxxxThe English cabinetmaker and designer George Hepplewhite (c1727-1786) learnt his trade in Lancaster. He set up his workshop in Redcross Street, London in 1760 (thirty years before Sheraton arrived in the capital), but his name did not become well known until 1788, two years after his death. It was in that year that his Cabinet-maker and Upholsterer's Guide was published, providing a catalogue of neo-classical designs aimed to improve the style and serviceability of ordinary household furniture. Its 300 plates illustrated a wide variety of elegant, graceful pieces, all strongly constructed, and many attractively inlaid and decorated with the classical motifs and floral designs then being introduced into furnishing by the talented English interior designer Robert Adam. Featuring prominently among these designs were the Hepplewhite chairs, distinctive by their slender frame, their inlaid or painted decoration, and their heart, shield or oval shaped backs. 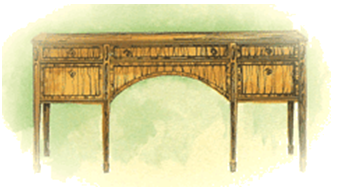 xxxxxNo piece of furniture can be attributed with certainty to Hepplewhite’s firm or to Hepplewhite himself, but his Guide, like Sheraton’s Drawing Book a few years later, proved popular in Britain and had a marked influence on furniture design in the United States. Along with his contemporary and rival Sheraton - who doubtless “borrowed” some of his ideas - he was one of the foremost English furniture designers of the late 18th century.