xxxxxAs we have seen, the Sixth Crusade of 1228, by dint of a peace agreement between Frederick II and the Sultan of Egypt, put Jerusalem and other cities back into Christian hands. It was a triumph of negotiation by the German king, but it was not destined to last for long. In 1244 a large Egyptian force attacked the Holy City, and it was quickly overtaken and sacked. Yet another crusade was required - if sufficient support could be mustered - and this time the French king, Louis IX, answered the call. The Seventh Crusade of 1248 was directed against Egypt - like the fifth - and, like the fifth, it ended in failure. The Christians were totally defeated outside Cairo, and Louis was captured, together with much of his army. A large ransom was paid for his release, and he then stayed in Syria for four years, working for the Latin kingdom. Undeterred by his military failure, he led the Eighth Crusade in 1270, but died soon after reaching Tunisia. 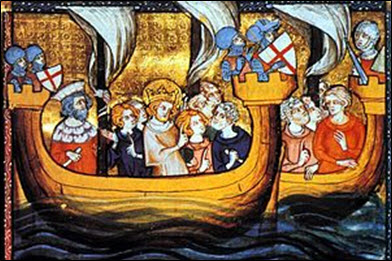 xxxxxAs we have seen, the Sixth Crusade of 1228, led by Frederick II, proved remarkably successful. The German king negotiated a settlement with the Sultan of Egypt by which Jerusalem and other cities were returned to Christian control. But this success was short-lived. In 1244 a large Egyptian force attacked the Holy City, and it was quickly occupied and sacked. Another crusade was needed - if sufficient support could be mustered - and this time Louis IX of France answered the call (illustrated en route). The Seventh Crusade of 1248, like the fifth, was directed against Egypt, and it proved an even greater disaster. It succeeded in taking Damietta, but the attack on Cairo ended in total defeat. The Egyptians opened the sluice gates along the Nile and trapped the invading army in the flooding that followed. Louis was captured, together with much of his army, and a huge ransom had to be paid to gain the king's release. Having been set free, however, Louis remained in Syria for four years, negotiating settlements in favour of the Latin Kingdom and strengthening the defences of the Christian cities.

xxxxxAs we shall see, undeterred by this military failure, Louis embarked on the Eighth Crusade in 1270, but died of disease soon after reaching Tunisia. This was the last crusade. Jerusalem was to remain in Muslim hands for many years to come.