xxxxxThe Indian Mutiny or Sepoy Rebellion broke out Meerut in May 1857, and within a matter of weeks had spread across northern and central India. Led by sepoys (Indian soldiers serving with the East India Company), the cities of Delhi, Agra and Cawnpore were seized, and the garrison at Lucknow was besieged. The uprising was initially caused by the issue of rifle cartridges which had been greased with fat from the cow and the pig - sacred animals in the religious belief of the Hindu and Muslims - , but it was, in fact, an attempt by the sepoys to overthrow their British masters, thereby regaining lost land and safeguarding their traditional way of life. After their initial success, however, the rebels lacked a powerful leader, and the tide turned against them. The leading princes did not join the mutineers, the Sikhs of the Punjab supported the British, and southern India took no part. The British army went on the offensive and after some savage fighting reoccupied the lost cities and gained control of the country. The mutiny, which had seen bloody atrocities on both sides, was crushed by July 1858, and the British then wreaked their revenge, killing thousands of sepoys and citizens. In response to the uprising, control over India was transferred from the East India Company to the Crown, and the army was totally reorganised. British policy towards the Indian people did become more conciliatory, but many Indians saw the event as the first war of national independence. The Indian National Congress was formed in 1885 and, one of its leaders was to be the great Mahatma Gandhi. In the meantime, the British continued to govern, and Queen Victoria was proclaimed empress of India in 1876 (Vb).

THE INDIAN MUTINY OR SEPOY REBELLION 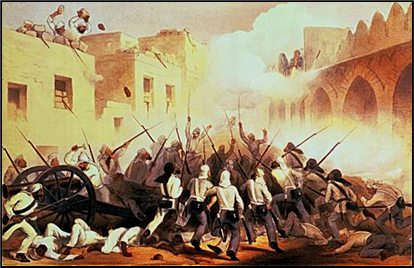 xxxxxThe Indian Mutiny - known also as the Sepoy Rebellion - broke out in May 1857. Led by sepoys (Indian troops serving within the British East India Company), it quickly spread over north and central India, and brought with it violent uprisings amongst the poor, unemployed, and those who had had their land confiscated. The outbreak, it would seem, was sparked off by a report - possibly true - that new rifle cartridges issued by the British had been greased with fat taken from cows and pigs - sacred animals in the respective faiths of the Hindu and Muslim. However, the cause of the revolt ran much deeper than that. It was, in fact, a rebellion against British rule in India. There was widespread and growing resentment amongst Indians at the increasing occupation of their land by an alien people, and the threat this posed to their traditional way of life and their time-honoured customs. Indeed, the annexation of the state of Oudh in 1856 is seen as one of the causes of the mutiny. Furthermore, Christian missionaries were undermining belief in the Hindu faith, British officials were replacing the ruling élite, and it was widely rumoured that plans were afoot to break down the caste system, the social divisions into which Hindu society was strictly divided.

xxxxxThe revolt broke out at the military station of Meerut after 83 sepoys of the 3rd (Bengal) Light Cavalry refused to use what they regarded as offensive cartridges. Their ill-treatment and the long prison sentences imposed on them brought about a general uprising. The sepoy troopers shot their British officers and then marched on Delhi. There the sepoy garrison came out in their support, and within hours the last representative of the Moghul dynasty, the ageing Bahadur Shah II, had been 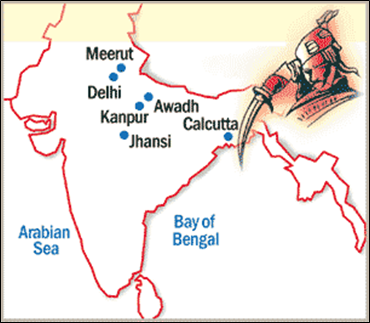 proclaimed emperor of India. Exhilarated by the ease of this early success, the revolt spread rapidly across northern India, with the British garrison, recently reduced to 35,000 because of the Crimean War, being unable to stop the initial onslaught. Some twenty-five cities rose up in revolt, and Agra and Cawnpore were occupied.

xxxxxBy July, however, the tide had begun to turn in favour of the British, helped by the fact that none of the leading Indian princes had joined the mutineers, the Sikhs and the Gurkhas had remained loyal to the British, reinforcements had begun to arrive, and southern India had taken no part in the uprising. Furthermore, despite their fervour, the rebels lacked a national leader, hindered above all by the clash of interest between Hindu and Muslim. Troops were despatched to retake Delhi and Cawnpore (Kanpur on map) - achieved after several days of savage street fighting - , and a force was sent to relieve the garrison at Lucknow (Awadh on map). The siege in place there was lifted in November, and the town was fully taken in the New Year. By July 1858 the mutiny was over save for some mopping-up operations in the Central Provinces.

xxxxxThe mutiny itself was marked by widespread atrocities on both sides, many involving the murder of women and children and the shooting of prisoners in cold blood. In Meerut, for example, the sepoys killed every European they found, and there were particularly violent massacres at Delhi, Jhansi and Peshawar. At Cawnpore the entire garrison was granted a safe passage down the Ganges to Allahabad, but all were massacred once they had left the city. And the vengeance wreaked upon the captured rebels and those who were deemed to have supported them was likewise barbaric. Thousands were killed by “hanging parties”, many without trial, and hundreds of sepoys were bayoneted or lashed to the muzzle of a cannon and shot to pieces. The only leader to emerge on the rebel side was Nana Sahib, the adopted son of the deposed Maratha chief. He assumed command of the sepoys in July 1857, but was defeated in battle and driven into Nepal. He was never seen again. Bahadur Shah II, aged 82, was exiled to Burma (Myanmar) with his family and died there.

xxxxxThe immediate result of the mutiny was the India Act of August 1858. This transferred control of the sub-continent from the East India Company to the Crown, it being generally agreed that the uprising was largely due the company’s incompetence. Power was vested in the Secretary of State for India, a cabinet post, though the day-to-day running of affairs was left in the hands of the viceroy, working through the Indian civil service. This was the beginning of the British Raj (or Rule). At the same time, a complete reorganisation of the Indian army was put in motion. This resulted in the establishment of a highly professional force. Its officers continued to be British, but they were trained to take a much greater part in the training and welfare of the men under their charge. 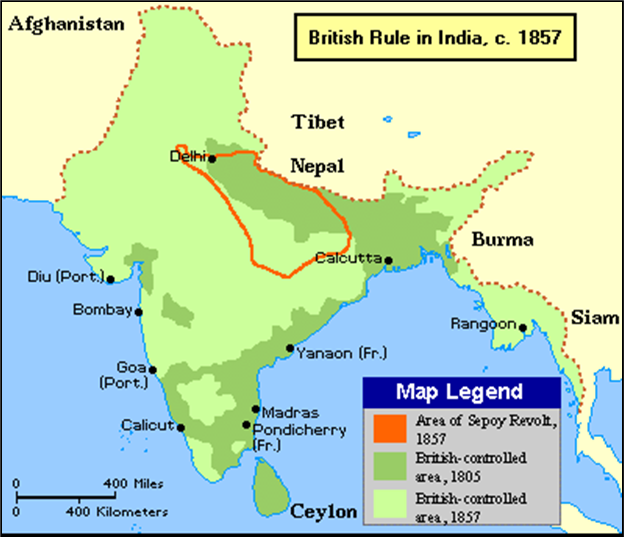 xxxxxIn order to avoid a repetition of so violent an uprising, changes were also made or moderated in the government’s attitude towards the Indian peoples. A more conciliatory policy was introduced, based on a greater degree of consultation, and this was to be seen at work in the new council of 1861. This led to a more sensitive, tolerant attitude towards the people’s customs and traditions, though western institutions and standards continued to be introduced as the opportunity arose. But for many Indians the mutiny was seen as their first war of independence. In 1885 the Indian National Congress was formed, a movement which was later to be led by the great leader for Indian independence, Mahatma Gandhi. In the meantime, the British continued to govern, and in 1876 (Vb) Queen Victoria was proclaimed 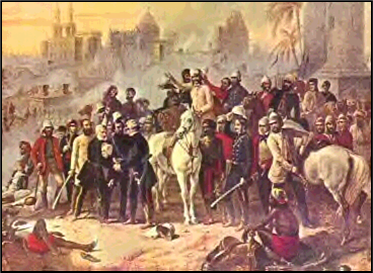 empress of India, then seen as the brightest jewel in the imperial crown.

xxxxxIncidentally, the British general Robert Cornelius Napier (1810-1890) was knighted for his action in relieving the garrison at Lucknow in 1858 (illustrated). Two years later, he took part in the capture of Peking during the Second Opium War against the Chinese. As we shall see, he was made a baron in 1868 following his invasion of Ethiopia, his victory at the Battle of Magdala, and his rescue of British hostages held by Emperor Tewodros II. ……

xxxxx…… Thex“Relief of Lucknow”, shown above, was the work of the English painter of military scenes Thomas Jones Barker (1815-1882). He is remembered above all for his The Meeting of Wellington and Blucher at the Battle of Waterloo, produced in 1850. ……

xxxxx……  In his Cawnpore of 1865, the English historian George Otto Trevelyan gives an account of the massacre of the garrison after it left the city with a promise of safe passage. ……

xxxxx……  It was during the Indian Mutiny that a number of British regiments dyed their red tunics a muddy tan as a means of camouflage. This khaki colour - the Urdu word for “dusty” - was used by the British Army during the Second Boer War (1899-1902), and then adopted by other national armies. …… 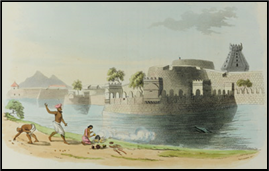 xxxxx……  The mutiny of 1857 was not the first open revolt by Indian troops against the British. In July 1806 the bulk of three native battalions at Vellore Fort near Madras (illustrated), objecting on religious grounds to the introduction of a new uniform (particularly the replacing of the turban by a round hat), mutinied and killed or injured 200 British troops. A contingent of cavalry was quickly summoned from Arcot and the Vellore Mutiny was swiftly and brutally put down.