xxxxxFriedrich von Schiller, one of Germany’s greatest poets and dramatists, began by producing a number of Sturm und Drang plays, including his first major success, The Robbers, in 1782. This, like many of his works, espoused the cause of political and individual freedom. He wrote a number of ballads and poems, notably his Ode to Joy, later immortalised by the German composer Ludwig van Beethoven in his Ninth Symphony. His major works were written in the ten years following his close friendship with Johann Wolfgang Goethe, beginning in 1794. To this period belong his classical dramas Wallenstein (about the Thirty Years’ War), Maria Stuart, The Maid of Orleans, and William Tell. His powerful rhetoric in these works, and the noble ideals he thereby inspired, have seldom been equalled. Apart from literature, Schiller also wrote historical works, including one about the Thirty Years’ War, and produced philosophical treatises and poems based on works by Immanuel Kant. As we shall see, Schiller also played a vital role in persuading his friend Goethe to resume work on his masterpiece Faust. 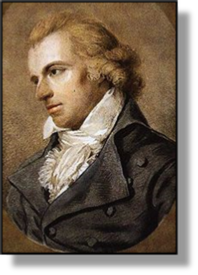 xxxxxIt was in 1794 that the German dramatist, poet and historian Johann Christoph Friedrich von Schiller began his close friendship with his fellow countryman, the literary giant Johann Wolfgang Goethe. The ten years that followed proved to be his most productive and successful. He first came to prominence as a dramatist with his Sturm und Drang plays, and much of his work, particularly in his early days, was written in the cause of political freedom. Later in his career, as in the case of Goethe, his works took on a more classical and historical approach, as can be seen in his dramas Wallenstein, Maria Stuart, The Maid of Orleans (Joan of Arc) and William Tell, all produced at the turn of the century.

xxxxxHe was born in Marbach, Württemberg, and, as the son of an army officer, was sent to a military academy at the age of 14 to study law and medicine. He was not happy with the harshness of army life 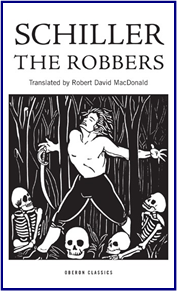 , however, and was anxious to pursue a literary career. His opportunity came in 1780, when he was appointed an assistant medical officer to a military regiment stationed at Stuttgart. While there he completed his first play, The Robbers, a violent tragedy which called for political freedom, and included a powerful attack upon corruption in high places. It was given its first performance at Mannheim in January 1782, and was an instant success with the public, though not with the authorities. On his return to his regiment, Schiller was given a fortnight’s detention for being absent without leave, and, more to the point, banned from producing any more plays. He promptly escaped, and virtually spent the next ten years on the run. He first returned to Mannheim where he produced two more highly successful plays, his first historical drama Fiesco and his tragedy Cabal and Love.

xxxxxIn 1785, being forced to move on, and short of cash, he settled in Leipzig with the help of some friends. It was here that he produced two novels, and completed his first major poetic drama, the idealistic Don Carlos. Set in Spain during the height of the Inquisition and again taking as its theme the fight against political oppression, it was published in book form in 1787. Written in a more classical style and with a somewhat lengthy and complicated plot, this blank verse drama did not quite meet with the success he had expected. 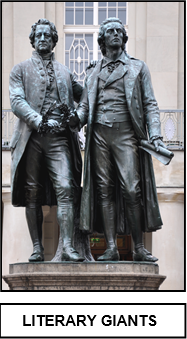 xxxxxDisillusioned with his literary efforts, in 1788 Schiller turned his hand to writing history and produced an account of the successful revolt of the United Netherlands against Spanish rule. It was this work, in fact, not his poetry or drama, which first attracted Goethe, and it was largely because of his good offices that Schiller was appointed professor of history at Jena university in 1790. It was here that he began his history of the Thirty Years’ War, completed in 1793 after resigning his professorship because of ill-health. Meanwhile a study of philosophy based on the works of Kant led to the publication of two works on aesthetics, On Grace and Dignity and his Letters on the Aesthetic Education of Man. Later, encouraged by Goethe, he put his own philosophical theory - a means of obtaining inner harmony - into verse via a number of reflective poems, including Life and Ideal, The Wall, and the Power of the Song. 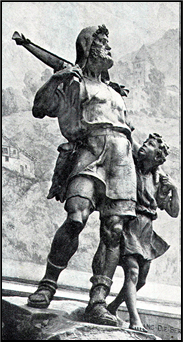 xxxxxAnd, more than anything, his friendship with Goethe brought him back to pure poetry. To the late 1790s belong his two profoundly idealistic poems - The Division of the Earth and the Words of Faith - and a series of ballads which included The Glove, The Driver, The Cranes of Ibycus and his celebrated The Song of the Bell. And he collaborated with Goethe in producing Die Horen (The Hours), a magazine which attempted to raise the standard of taste in art and literature. But, more importantly, he now resumed his writing for the stage and gained world renown. Within the space of five years he produced what many consider to be his masterpiece, Wallenstein, the verse trilogy based on the Thirty Years’ War, together with his other classical verse dramas Maria Stuart, The Maid of Orleans, and William Tell (illustrated), written in 1804 and justifying violence in a righteous political cause. Without pause, he then started on his tragedy Demetrius, but the ill health that he had suffered since 1791 finally took its toll. Worn out by his efforts, he died from tuberculosis in May 1805.

xxxxxQuite apart from his contributions as an historian and a philosopher - by no means insignificant in themselves - Schiller stands alongside Goethe as one of the greatest dramatists in the history of German and European literature. The power and eloquence of his rhetoric, and the noble ideals of political liberty and individual freedom that he thereby inspired, has seldom been equaled. And the friendship forged between Schiller and Goethe, the two literary giants of Germany at that time, brought benefit not only to each other but also to the world at large. It was Goethe who brought Schiller back to poetry and to the production of some of the finest dramatic works ever produced. It was Schiller, as we shall see, who inspired Goethe to resume and complete his great masterpiece Faust. The literary world is indebted to both men. For his part, Schiller, by his writings, inspired many composers, including the Italian masters Gioachino Rossini (his opera William Tell) and Giuseppe Verdi (his opera Don Carlo). The Goethe-Schiller statue illustrated above, the work of the German sculptor Ernst Rietschel, was placed in front of the Court Theatre in Weimar in 1857.

xxxxxIncidentally, Schiller’s Ode to Joy, written in 1785, was later immortalized by the German composer Ludwig van Beethoven. His Ninth Symphony, considered to be one of his greatest works, ends in a movement which incorporates a choral setting of this poem. In the late 20th century this choral work was adopted as the anthem of the European Union, formed in 1967.

xxxxxDuring his career, Schiller befriended the German lyric poet Friedrich Holderlin (1770-1843) (illustrated). He published some of his work and for a number of years helped him to find employment as a tutor. Holderlin’s lyrics are among some of the finest in German literature. A great admirer of ancient Greece, his verse, written in an expressive, neo-classical style, is imbued with passion and vision, and includes lyrics to freedom, harmony and friendship.

xxxxxAmong his poems were Menon’s Lament for Diotima, Bread and Wine, and his apocalyptic work Patmos. His lyrical novel, Hyperion, begun in 1797, tells the story of a disillusioned patriot fighting for Greek independence. Following the sudden end to a love affair in 1798, and a return to a life of poverty, he became progressively disturbed mentally, and ceased to compose after 1806. Apart from Schiller, he was also a friend of the two German philosophers Hegel and Schelling, whom he met while studying at Tubingen. 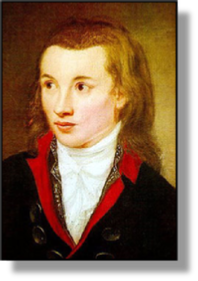 xxxxxAnd also deserving a mention here is the German romantic poet Friedrich von Hardenberg (1772-1801), one of Schiller’s pupils at Jena University. Better known by his pseudonym Novalis - from an earlier family title - he is remembered today for his Religious Songs of 1799 and, in particular, for his Hymns to the Night, the following year, and his unfinished romance Henry of Ofterdingen. He studied a wide range of subjects at the Universities of Jena, Leipzig and Wittenberg, and, after attending a course at the Mining Academy at Freiberg in Saxony, seemed set on a career in the mining industry. In 1797, however, he was overwhelmed by personal tragedy following the death of his young fiancée Sophie von Kühn - shortly after her 15th birthday - and that of his much loved younger brother Erasmus.

xxxxxIn the struggle to overcome his grief Novalis turned to the writing of poetry, and his songs and poems became for him a release from sorrow, and the means to a spiritual awakening, a new religious vision. Freeing his feelings from material things, he felt united with his beloved within a spiritual world. In particular, his Hymns to the Night, a group of six related poems of praise and 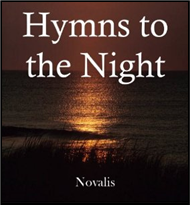 religious devotion, are beautiful in their lyricism and - being out of touch with reality - imbued with a mystical, brooding spirit. This “magic idealism”, as he called it, passionate and tender in character and clearly drawn from the writings of the German philosophers Kant and Fichte, made him an early representative of German romanticism. And this reputation was enhanced by his romance Henry of Oftendinger, a fusion of novel and fairy tale in which Henry, a medieval poet on a journey of self-discovery, seeks to find the “blue flower”, a symbol of inspiration which becomes the emblem of the German romantic movement.

xxxxxIn 1799 Novalis returned to work at the government salt mines at Weissenfels, and in December 1800 he was appointed magistrate for the district of Thuringia. By this time, however, he was suffering badly from tuberculosis. He died of this illness in March the following year, aged 28, and was buried in the cemetery at Weissenfels. During his brief career he met the German writers Goethe and Herder while on a visit to Weimar.