xxxxxIn 1696 the English engineer Thomas Savery became the first man to make a working steam engine. He produced steam in a boiler, harnessed its power in a separate condenser, and then controlled it by hand-operated valves. It became known as the “Miner’s Friend” but, in fact, it proved most unreliable. Two years later he went into partnership with Thomas Newcomen and, as we shall see, it was he who improved upon Savery’s prototype and produced the first efficient steam-powered piston engine in 1712 (AN). Towards the end of his life Savery installed a pumping system, driven by a water wheel, to supply the fountains in the grounds of Hampton Court Palace, London. 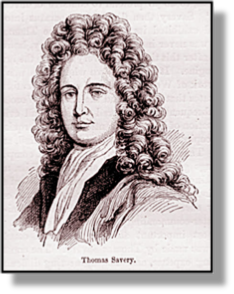 xxxxxThe Englishman Thomas Savery was the first man to manufacture a working albeit unreliable steam engine. A military engineer by trade, in 1696 he invented a steam-driven water pump by generating steam in a boiler, harnessing its power in a separate condenser, and then controlling its pressure by the use of hand-operated valves. He patented his invention two years later. Described as a machine for "Raiseing of Water and occasioning Motion to all Sorts of Mill Work by the Impellent Force of Fire", it became popularly known as the "Miner's Friend". However, there is no evidence to suggest that it was ever used to raise water from a mine. Indeed, the engine seldom worked satisfactorily, mainly due to shoddy workmanship and the use of unsuitable material. 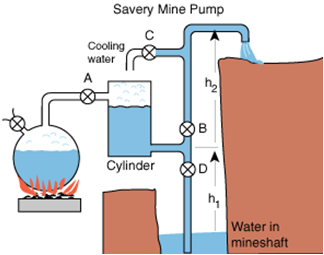 xxxxxBut the method employed was a practical one. In 1698 he went into partnership with a fellow Devonian, Thomas Newcomen, and, as we shall see (1712 AN), it was he who, improving upon Savery's design, produced the first efficient steam-powered piston engine some fourteen years later.

xxxxxAmong Savery's earlier inventions was a machine for grinding and polishing plate glass, a paddle wheel, and a mechanism designed to measure the distance sailed by a ship. In 1714, on the strength of his pioneer work on water pumps, he was appointed surveyor of the waterworks at Hampton Court Palace. During his short time there he installed a pumping system, driven by a water wheel, to supply the fountains in the grounds.

xxxxxBut if Savery came up with the first steam engine, the French physicist Denis Papin (1647-c1712) was the first to arrive at the concept. As early as 1679 he invented a “steam digester”, a primitive pressure cooker, and this gave him the idea of steam pressure as a source of power. Whilst he never put his thoughts into practice, it is very likely that Savery and Newcomen learnt of his theory. Papin at one time worked with the Dutch scientist Christiaan Huygens in Paris, and the Irish physicist Robert Boyle in London. It was when he was professor of mathematics at Marburg University that the German physicist Gottfried Leibniz sent him a drawing of Savery’s engine. Following further research, in 1707 he published his The New Art of Pumping Water by Using Steam, and went on to envisage a paddle wheel driven by steam. His theories were later used by his fellow countryman Cugnot when making the first automobile in 1769 (G3a). 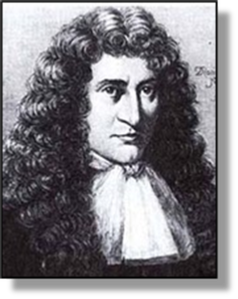 xxxxxBut it must be noted that the concept of a steam-driven engine was first envisaged by the French physicist Denis Papin (1647- c1712). As early as 1679 he invented a "steam digester", the forerunner of the modern pressure cooker, complete with a safety valve. It was while working on this project that he noticed that steam confined within a vessel forced the lid upwards, and it was from this action that, around 1690, he conceived the idea of using steam pressure to power a piston and cylinder engine. His idea never left the drawing board and, as he envisaged using one vessel as both boiler and cylinder, it would not, in fact, have worked. However, it is almost certain that Savery, and, indeed, Newcomen, became aware of his idea and realised its potential. 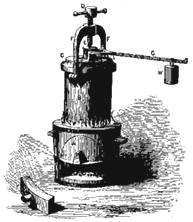 xxxxxPapin was born in Blois, on the Loire. He studied medicine at Angers and then, as we have seen (1657 CW), became an assistant to the Dutch scientist Christiaan Huygens in Paris, helping him with his development of air pumps. In 1675 he came to London to work with the Irish physicist Robert Boyle and it was during this period that he invented his "steam digester" (illustrated). He later worked at the Royal Society, and then became professor of mathematics at the University of Marburg. It was while working there that the German physicist and philosopher Gottfried Leibniz sent him a drawing of Savery's steam engine. This inspired him to carry out further research. In 1707 he published his treatise on The New Art of Pumping Water by Using Steam, and he followed this up two years later by building a paddle boat. The paddle wheel was man-powered, but it demonstrated at this early stage that oars could be replaced by a mechanism which was well able to be driven by steam.

xxxxxApart from the contribution his research made to the early development of the steam engine, Papin's theories on this subject, as we shall see, were used directly by his fellow countryman, the military engineer Nicholas-Joseph Cugnot, when in 1769 (G3a) he designed the first true automobile - a steam-powered tricycle.