xxxxxSanzio Raphael, one of the great artists and architects of the Italian High Renaissance, was born in Urbino, the son of a court painter. At the age of 16 he went to Perugia, where he worked as an assistant to the accomplished Umbrian artist Pietro Perugino. It was here that he painted his two large works Marriage of the Virgin and his Crucifixion. Both of these show the graceful influence of his master, and it was clear at this early stage that he possessed an extraordinary talent. To this period belongs the narrative paintings Vision of a Knight (in the National Gallery, London), The Three Graces, and St. Michael and St. George. 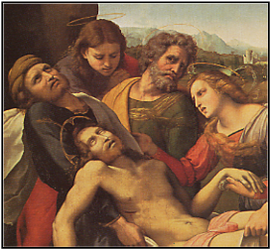 his four years’ stay in Florence (1504-1508), when he was able to make a study of artists of the stature of Leonardo da Vinci, Michelangelo and Masaccio, that his work took on that eloquence and harmony which brought him commissions in abundance. His somewhat rigid composition and overdue concern for perspective gave way to a more natural style, and his subtle use of light and shade heightened dramatic effect. To this period belongs his La Belle Jardinière and his Madonna of the Goldfinch (illustrated below), paintings outstanding for their beauty and serenity. Other works of this time included his Entombment of Christ (detail illustrated here), an altarpiece showing the influence of Michelangelo, and St. George and the Dragon, painted as a gift to Henry VII from the Duke of Urbino, but now housed in the National Gallery in Washington.

xxxxxIn about 1508, at the age of 25, he was called to Rome by Pope Julius II to produce a cycle of frescoes for the pope's living quarters in the Vatican Palace. Michelangelo was working on the ceiling of the Sistine Chapel at this time. His School of Athens (illustrated centre below), depicting one of the themes - that of philosophy - in the room known as the Stanza della Segnatura, is one of his masterpieces. Indeed, it is often regarded as his greatest work, and one of the finest produced in the Renaissance period. Set within a lofty, classical hallway (based on Bramante's design for the new St. Peter's) it shows bustling groups of ancient philosophers discussing the problems of the day, the groups composed in such a way as to draw the eye to the central figures of Plato and Aristotle.

xxxxxIt was during this highly 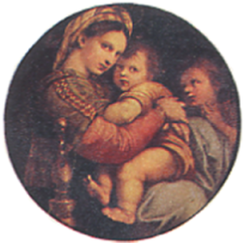 productive, almost feverish period that he designed a series of tapestries for the Sistine Chapel depicting various Acts of the Apostles. These were used to cover the side walls during ceremonial occasions and were woven in Brussels. Seven of the ten fine watercolour cartoons (preparatory drawings) made for these tapestries can be seen in the Victoria and Albert Museum in London. And it was at this time, too, that he painted, among other works, the Triumph of Galatea for the villa Farnesina, a portrait of Julius II, and a series of Madonnas, including another of his masterpieces, the bold and richly-coloured Sistine Madonna, and, here illustrated, Madonna of the Chair.

xxxxxRaphael worked alongside Bramante when he was designing the new St. Peter's Basilica, and in 1514, following Bramante's death, he was appointed chief architect of this project. His revised plans were never used, in fact, but he designed a number of buildings in Rome including the Chigi Chapel in Santa Maria del Popolo, the Palazzo Vidoni and the Villa Madama. The following year, to add to his workload, he was put in charge of all the excavation of antiquities in and around Rome.

xxxxxHis portraiture and large production of mythological and religious works inspired not only many of his contemporaries, but also influenced the work of future masters, such as Rubens, Poussin and Rembrandt. He is best remembered today for his frescoes and tapestries in the Vatican, and his numerous Madonnas, but his brilliant portrait of Baldassare Castiglione (1528 H8), painted in 1516 and illustrated below, clearly shows that he was also an accomplished artist in this genre.

xxxxxHe died in 1520 on his 37th birthday, an admired and respected artist. His funeral service was held in the Vatican and his final great work, the unfinished altarpiece The Transfiguration, was placed at the head of the bier. He was buried in the Pantheon at Rome.

xxxxxIncidentally, as noted earlier, while Raphael was painting frescoes in the apartments of the Vatican Palace, around about 1509, Michelangelo was working on the ceiling of the Sistine chapel. It is said that in his School of Athens two of the ancient philosophers bear an uncanny likeness to the painter and his fellow worker Michelangelo! There are a number of works by Raphael in the National Gallery in London.

xxxxxSanzio Raphael was one of the greatest artists of the classical period of the Italian Renaissance. As a teenager he was a pupil of the Umbrian painter Pietro Perugino. To this period belongs his two large works Marriage of the Virgin and his Crucifixion, and his narrative painting Vision of the Knight. But it was when he moved to Florence and was able to study the works of Leonardo da Vinci, Michelangelo and Masaccio, that his work became noted for its outstanding eloquence, harmony and subtle use of light and shade. Here he produced La Belle Jardinière and his Madonna of the Goldfinch. In about 1508 he was summoned to Rome by Pope Julius II. There he painted a series of frescoes for the papal apartments, and his masterpiece The School of Athens, a work of balance and order. Famous, too, are a number of Madonnas, and the series of tapestries he produced for the Sistine Chapel, at the time when Michelangelo was working on the ceiling. As an architect he worked for a time with Bramante, and he designed a number of buildings in the city. His work influenced, above all, Rubens, Poussin and Rembrandt.

xxxxxRaphael’s teacher, the Umbrian Pietro Perugino (c1450-1523), is known to have worked in the studio of the Florentine painter and sculptor Andrea del Verrocchio. One of his major works, Christ Giving the Keys to St. Peter, has survived in the Sistine Chapel, Rome, but he was at his most productive in Florence. His works here testify to the purity and clarity of his style and the simplicity of his composition. They include Madonna with Saints and Angels, Agony in the Garden, The Marriage of the Virgin, and his famous Pietà for the Pitti Palace. Many of his paintings show his liking for vast landscapes. Amongst his works at Perugia, his native city, is his richly-adorned altarpiece for the Church of Santa Agostino. 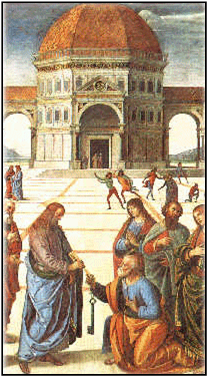 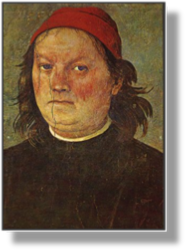 was clearly influenced by his teacher, the Umbrian artist Pietro Perugino (c1450-1523). Knowledge of his early days is sketchy, but it is known that he worked in the Florence studio of the painter and sculptor Andrea del Verrocchio, where Leonardo da Vinci was later to serve as an apprentice.

xxxxxFrom about 1479 he began work in Rome for Pope Sixtus IV, and one of his major works, Christ Giving the Keys to St. Peter (detail illustrated), has survived in the Sistine Chapel, still admired for the simplicity of its composition. Three other narrative scenes by him, painted behind the altar and completed in the early 1480s, were later destroyed by Michelangelo to make way for his Last Judgement. 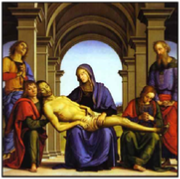 in 1486 and it was here that he was at his most productive. His works during this period include the Madonna with Saints and Angels, Agony in the Garden, The Virgin in Glory with Saints, The Marriage of the Virgin, and his famous Pietà for the Church of the Convent of San Giusto, Tuscany (illustrated), paintings which attest to the purity and clarity of his style and his penchant for vast landscapes. His last major work is thought to be the fresco The Nativity, now in the National Gallery in London.

xxxxxWhile in Florence, Perugino made frequent visits to Perugia, and it is from this city that he derived his name. (He was actually born Pietro Vannucci). Amongst his work at Perugia is a richly-adorned altarpiece for the Church of Santa Agostino, completed in 1517. He died of the plague six years later. 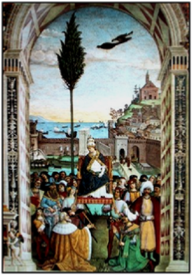 xxxxxAnother Italian artist who was born in Perugia was Pintoricchio (1454-1513). He was closely associated with Perugino, and almost certainly assisted him during the paintings of the frescoes in the Sistine Chapel. A prolific painter, he is perhaps best known for his six colourful frescoes in the Borgia apartments in the Vatican Palace (now housing the library), started in 1492 and taking three years to complete. His last major work were ten episodes from the life of Pope Pius II, illustrated in frescoes, in the library of Siena Cathedral. This painting shows Pius II arriving in Ancona in 1464, an Italian port on the Adriatic coast, in the hope of launching a crusade to recapture Constantinople. He died there a week later, and the idea of a crusade was abandoned.