xxxxxThe Italian Santorio was the first physician to use precision instruments. He developed a pulse clock in 1602, and an elementary clinical thermometer in 1612. His book On Medical Measurement, published two years later, was a study of basal metabolism - the general activity of an individual’s body. He regularly corresponded with his fellow-countrymen, the anatomist Fabricius and the astronomer Galileo.

Santorio: marble bust at the entrance to his mausoleum, sculptor unknown – Church of the Servi, Venice. Weighing Chair: frontispiece to the 1737 edition of his On Medical Measurement, first published in 1614, artist unknown. 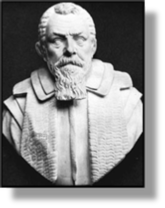 xxxxxThe inventive Italian physician Santorio Santorio graduated from the University of Padua in 1582, and returned to be professor of medical theory from 1611 to 1624. His last years were spent in retirement in Venice. He regularly corresponded with the Italian anatomist Hieronymus Fabricius and the Italian astronomer Galileo, and he gained a reputation for his medical inventions. He was, in fact, the first physician to use precision instruments in medical practice. For this purpose he developed a pulse clock in 1602, and made the first attempt at producing a clinical thermometer in 1612. 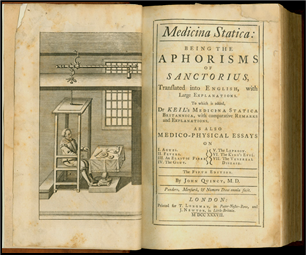 xxxxxHe also made some inroads into basal metabolism (the general activity of an individual's body). In an attempt to test out the theory put forward by the Greco-Roman physician Galen that respiration also occurred through what he called "insensible perspiration", he stayed for long periods on a large, home-made scale or “weighing chair” (illustrated), and measured his input and output (as it were) of solids and liquids. This research, conducted over thirty years and based on a new quantitative method, was the first systematic study of basal metabolism and provided the subject matter for his book On Medical Measurement, published in 1614.