xxxxxThe French explorer La Salle (1643-1687) migrated to Canada in 1666, and in 1671 claimed to have discovered the Ohio River. Later he set out in search of a route to the Orient and, on reaching the upper Mississippi in 1680, navigated the entire river to the Gulf of Mexico. Here in 1682 he claimed the whole of the Mississippi basin for France, naming it Louisiana in honour of his king. He then returned to France, and in 1684 led an expedition to establish a colony at the mouth of the Mississippi. It ended in disaster. Some of his vessels were shipwrecked or taken by pirates en route, and he lost his way, eventually landing in present-day Texas. From there he made a desperate attempt to march overland to Canada, but his men mutinied and killed him. 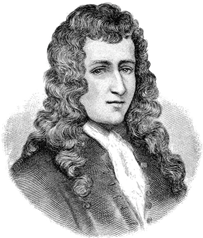 xxxxxLa Salle, full name René-Robert Cavelier, Sieur de La Salle, was born in Rouen in 1643 and, after being educated for nine years as a Jesuit novice, left the order and migrated to Canada in 1666. Here he was granted a plot of land and worked as a fur trader on the Saint Lawrence River, becoming acquainted with the local Indians - notably the powerful Iroquois - and gaining a working knowledge of their various dialects. In 1669 he set out to explore the territory south of Lakes Ontario and Erie and, according to his own account, discovered the Ohio River in 1671. On his return, Louis XIV granted him a noble title, and he was appointed commander of Fort Frontenac, named after the colonial governor of the day, and then under construction as a trading station. 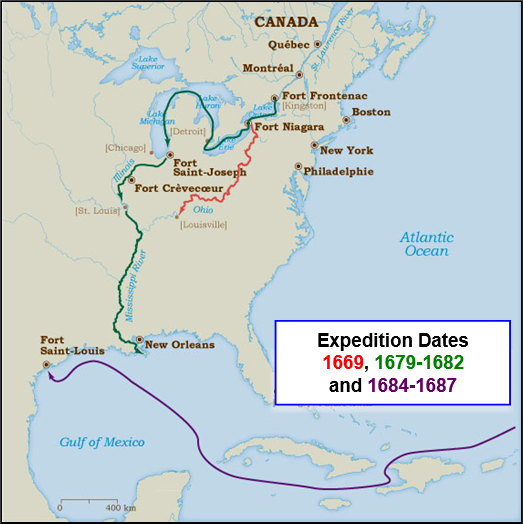 xxxxxBut La Salle remained determined - some say obsessed - to explore further west in search of that elusive route to the Orient. In 1679 he set up forts along the Illinois River, and then the following year, accompanied by the Italian soldier of fortune Henri de Tonty, reached the upper Mississippi - discovered seven years earlier by the French explorers Louis Jolliet and Jacques Marquette. Then in the spring of 1680 they began their epic journey, navigating the entire length of the Mississippi River from its junction with the Ohio to the Gulf of Mexico. Reaching the mouth of the river in 1682, La Salle placed a wooden cross in the ground and claimed the whole of the Mississippi basin for France, naming it Louisiana in honour of his king, Louis XIV. The French colonial empire in North America then stretched - in name only - from Quebec to present-day New Orleans.

xxxxxThe following year La Salle returned to France and gained the king's support for an ambitious project to establish a colony at the mouth of the Mississippi, and invade part of the Spanish province of Mexico. 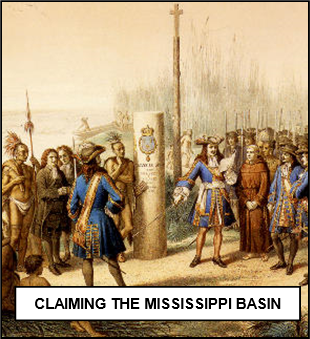 The expedition, made up of four ships, sailed in 1684 and soon ran into trouble. On the journey, ships were lost by storm or piracy, and many men died of disease. On reaching the Gulf of Mexico, La Salle had difficulty in finding the entrance to the Mississippi and eventually landed on the shores of present-day Matagorda Bay in Texas, some 500 miles beyond his destination. In January 1687, after a number of fruitless journeys inland to locate the Mississippi, he set out with a party of 17 men in a desperate attempt to reach Canada. He never made it. His men mutinied, and he was murdered near the Brazos River (now in Texas) in 1687. La Salle was an ambitious, arrogant man by nature, but nonetheless he showed a great deal of courage and tenacity in a career which, if nothing else, outlined the potential shape of a vast French colonial empire in North America.

xxxxxIncidentally, the Indians gave the Mississippi its name. It means The Father of Rivers or The Great River (Missi Sipi). ......

xxxxx…… In 1925 the Canadian writer and poet Sir Gilbert Parker wrote the historical novel The Power and the Glory, a somewhat colourful account of La Salle's exploits.