xxxxxWork on Salisbury Cathedral was begun in 1220. With its magnificent decorated spire, it is a fine example of Early Gothic Architecture. Its spire is the highest in England, and within the church is one of the oldest mechanical clocks, installed in 1386. The library contains one of the four original copies of the Magna Carta. Early Gothic is characterised by a new type of rib vaulting and by both interior and exterior buttresses, features which allowed a higher ceiling and larger windows. The round arch was replaced by the pointed one, and stained glass became more widely used. The style was dubbed “Gothic”, meaning barbarian and thus inferior, by the classicists of the 18th century, but the great monuments it created have now come to be regarded as outstanding feats of engineering. The style originated near Paris in the royal abbey church of St. Denis. Notable examples are the lovely Sainte Chapelle in Paris, with its enormous stained windows, and the awe-inspiring cathedral at Chartres, completed around 1240.

xxxxxSalisbury's cathedral of St. Mary, which took nearly 50 years to complete, is a fine example of Early English architecture. At 404 feet, its decorated spire is the highest in England, and dominates the city and surrounding countryside. The cathedral can also boast of one of the oldest mechanical clocks still working - installed in 1386 and now on display - and the library there contains one of the four original copies of the Magna Carta. Work on the church was begun soon after the old city, known as Old Sarum and situated on the former site of an Iron Age fort two miles to the north, was abandoned in 1220. 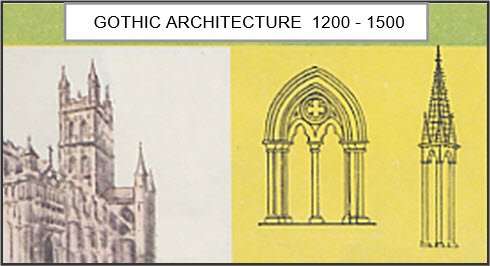 xxxxxThe Early English style of architecture is also known as Early Gothic. Classicists of the eighteenth century regarded this style as lacking finesse, an inferior product of medieval times, and dubbed it “gothic”, meaning barbaric. The term has now lost its original meaning, and refers to those great feats of engineering, the colossal cathedrals built during the thirteenth and fourteenth centuries.

xxxxxA new type of rib vaulting, together with narrow interior buttresses and exterior flying buttresses, meant that larger areas of wall space could be given over to glass, and the height of the building could be substantially increased. At the same time the pointed arch replaced the rounded arch and stained glass became a major feature.

xxxxxThe Gothic style originated near Paris in the royal abbey church of St. Denis (1137-1144) and, substantially refined, can be seen at its best in the lovely Sainte Chapelle in Paris - noted for its fifteen enormous stained glass windows - and in the awe-inspiring Chartres Cathedral. Completed in about 1240, this masterpiece of a cathedral is famed for its superb interior and the three great lancet windows - renowned for their Chartres blue - in the west facade. During this period work was also under way on the building of the cathedrals at Amiens, Rheims and Cologne, and a start had been made on the rebuilding of Westminster Abbey. 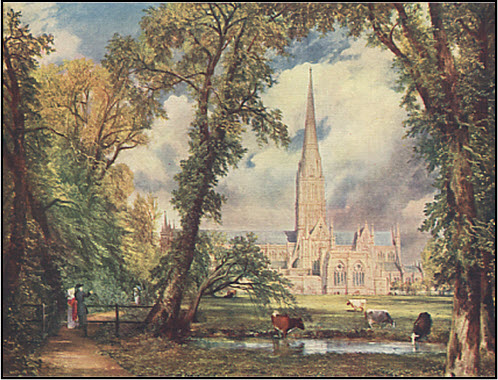 xxxxxIncidentally, the nineteenth century English artist John Constable produced two major paintings of Salisbury Cathedral. The one illustrated here was painted from the Bishop's Garden in 1823, and can be seen in the Victoria and Albert Museum, London.

The second one was painted “from the Meadows” in 1831 and - on loan from a private collection - was on display in the National Gallery, London, for many years. In May 2013, however, it came up for sale, and was bought by Tate Britain, London, for £23.1 million.