xxxxxAs we have seen, the settlement at the end of the Second Schleswig War of 1864, engineered by the Prussian foreign minister Otto von Bismarck, provided a ready excuse for war against Austria in 1866. Bismarck was anxious to exclude Austria from German affairs so that Prussia could lead the struggle for German unification. Having received a promise of neutrality from Napoleon III of France, and gained the military support of Italy, Prussia conjured up a dispute over Austria’s administration of Holstein and invaded the duchy in early June. Within a matter of days Austria and the majority of German states had declared war on Prussia and its ally Italy. The Battle of Sadowa (also known as the Battle of Koniggratz) proved the decisive encounter at the beginning of July. Both sides fought hard, but Prussia’s highly-trained army eventually routed the Austrians and brought a swift end to the war. Meanwhile on the Italian front the Italians lost the Battle of Custoza and the sea battle of Lissa. By the Treaty of Prague in August 1866 Austria was denied any part in German affairs, but only lost two territories - Holstein to Prussia and Venetia to Italy. Following its defeat Austria attempted to strengthen its position by forming a dual monarchy with Hungary in 1867. Bismarck, having formed the North German Federation and annexed Hanover and Hesse-Cassell, now prepared for the Franco-Prussian War of 1870, the outcome of which was to change substantially the map and the balance of power on the continent of Europe.

xxxxxAs we have seen, a plausible excuse for a war with Austria had been conjured up by the Prussian foreign minister Otto von Bismarck two years earlier by means of the peace settlement which ended the Second Schleswig War in 1864. This arrangement, whereby Prussia gained Schleswig and Austria was ceded Holstein, produced an uneasy, almost unworkable situation which, when so required, could be readily exploited by Bismarck to provoke a war between the two countries. Since the formation of the German Confederation, established by the Congress of Vienna in 1815, Austria had been the dominant power in the affairs of Germany, but the rise of Prussia had brought a rival onto the scene. As early as 1850, in fact, Frederick William IV of Prussia had attempted to establish his own confederation of German states, but had been forced by Austria to abandon the idea by a treaty dubbed “the humiliation of Olmutz”. By 1866, however, Bismarck felt confident that Prussia had the 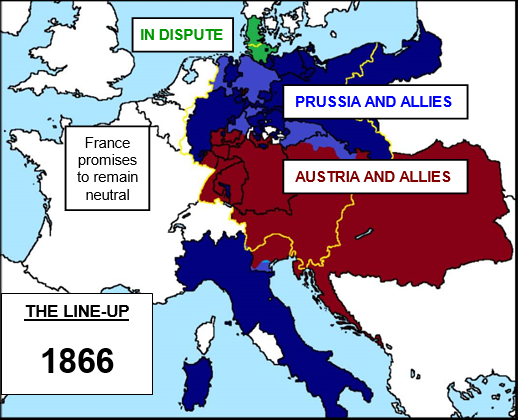 military capability to wage a successful war against the Austrians and to force them out of the Confederation - a necessary prelude to German unification under Prussian leadership.

xxxxxBut before taking on the considerable might of the Austrian Empire, Bismarck needed to take steps to minimise any possible opposition and to summon up support. He was confident that neither Britain nor Russia would come to the aid of Austria in the short term, but he feared French intervention. For this reason he met Napoleon III at Biarritz in October 1865 and, according to some accounts, received a guarantee of French neutrality in the event of an Austro-Prussian war by pledging to support France in its plans to invade and gain control of Belgium. Then in April 1866 he concluded a secret agreement with Italy, gaining the military support of King Victor Emmanuel II in return for the capture of Venetia, then in Austrian hands. This timely alliance ensured that Austria would be forced to fight on two fronts, thereby relieving pressure on Prussia’s military forces. Meanwhile at home his war minister Albrecht von Roon and his chief of the general staff, Helmuth von Moltke had built up a large, highly trained army based on universal conscription over a three year period. Infantry were issued with the Drayse breach-loading needle rifle - a considerable improvement on the muzzle-loading rifle -, and plans were drawn up to use the railway network and the new telegraph system to speed up mobilisation and ensure the rapid deployment of troops. 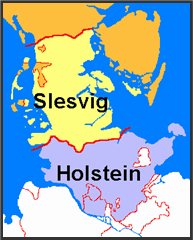 xxxxxHowever, the secret agreement made with Italy was only valid for three months so Bismarck could waste no time in finding an excuse for war. In May, therefore, Prussia proposed reforms of the Confederation which were clearly aimed at reducing Austrian influence, and then openly criticised the way in which the Austrians were managing their administration of Holstein. When the Austrians responded on June 1st by asking the Federal Diet to review the future of the duchies of Schleswig and Holstein, this action gave Bismarck his casus belli - “justification for war”. Regarded by Prussia as a flagrant breach of the agreement reached over the two duchies in August 1865 - the Convention of Gastein - Prussian troops marched into Holstein on the 9th. Five days later Austria declared war upon Prussia, supported by the majority of the German states, and within a week Italy had declared war on Austria. Bismarck’s gamble was under way.

xxxxxTo counter the forces of the German Confederation, a Prussian force known as the Army of the Main was despatched to Bavaria, and met up with an Hanovarian army near the town of Langensalza in the last week of June. In the battle that followed the Hanovarians won the opening rounds, but with the arrival of reinforcements the Prussians surrounded the Hanovarians and forced them to surrender. This virtually marked an end to resistance by Confederate forces, though the Saxon army did fight alongside the Austrians. In the meantime a large Prussian force of some 250,000 men, moved rapidly by road and rail, entered Bohemia, the major area of operations. After early skirmishes, during which the Prussian needle rifle caused heavy casualties, the two sides met near the village of Sadowa, close to the town of Koniggratz on the River Elbe. 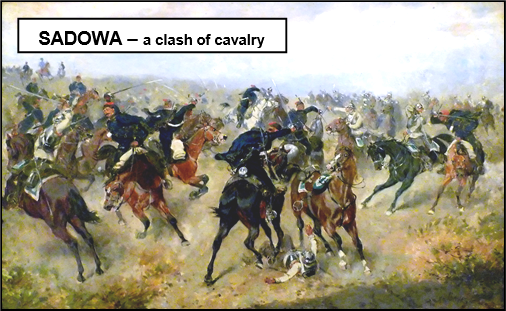 xxxxxThe Battle of Sadowa (or Battle of Koniggratz) opened on the 3rd July with neither side having good defensive positions. General Moltke, the Prussian commander, instructed to gain a speedy victory, planned to use his three armies in unison to overwhelm the Austrians in the centre of their line and on both flanks. In a dawn attack, his First Army advanced successfully in the centre, capturing Sadowa, and his Elbe army made progress against the enemy’s left flank, despite heavy and concentrated artillery fire. However, the failure of his powerful Second Army to take part in the coordinated attack from the north-east, delayed as it was by heavy rain and flooded roads, put Moltke’s plan in serious jeopardy. For up to five hours the Prussians found themselves heavily out-numbered and were obliged to fall back in a number of places. Had the Austrian commander, General Benedek, then launched a counter offensive on a large scale - as some of his senior officers strongly advised - the outcome of the battle might well have been different. As it was, mindful no doubt of the heavy casualties his army had suffered in the opening engagements, Benedek remained on the defensive until it was too late. By 11 a.m., when the Austrian centre eventually went on the offensive, the forward contingents of the Second Army were already beginning to arrive and take part in the battle. By early afternoon more than 100,000 troops had swelled the Prussian ranks. The Austrian right flank was completely overwhelmed, and then a Prussian advance on the left flank broke through the Austrian lines and precipitated a general retreat. So decisive was the Prussian victory and so heavy the Austrian casualties (some 40,000 dead and wounded) that Austria sought peace after this one battle. Bismarck’s gamble had paid off.

xxxxxThe Austrians were more successful in their war against Italy. They were defeated at the Battle of Bezzecca by a force led by the Italian freedom fighter Giuseppe Garibaldi, but their army of the south gained a decisive victory over Italian regular troops at the Battle of Custoza, fought 12 miles south-west of Verona in June 1866. The Italian army, led by King Victor Emmanuel, repulsed a series of Austrian attacks, but was forced to concede defeat after some nine hours of combat. Likewise at sea the following month the Austrians won a resounding victory at the Battle of Lissa near the island of that name in the Adriatic. Though having only seven ironclads they defeated an Italian fleet of twelve by using ramming tactics. But despite their failures, the Italians shared in the fruits of Moltke’s victory at Sadowa. By a treaty signed in Vienna they received Venetia, Austria’s last possession in Italy. This came close to completing Italy’s unification, and it is for this reason that this war with Austria is often known as the Third Italian War of Independence. 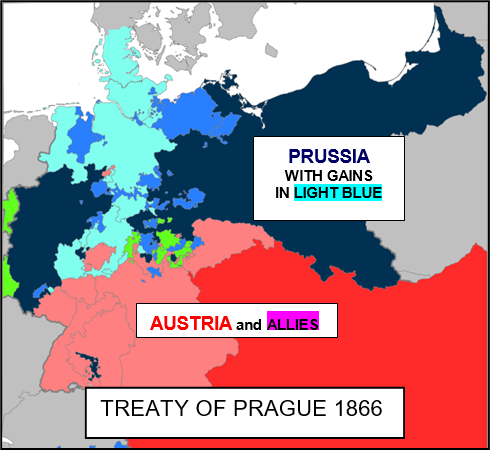 xxxxxWithxthe conflict between Prussia and Austria resolved in a matter of weeks, Bismarck was anxious to make a settlement which, like the war itself, had strictly limited objectives. By the Treaty of Prague in August 1866 Austria was totally excluded from taking any part in German affairs, but, save for this, there was no talk of a military occupation, and Austria was permitted to keep all its possessions with the exception of Venetia - which went to Italy by prior agreement - and the Duchy of Holstein, the nominal cause of the war in the first place. This speedy and lenient settlement prevented any intervention by outside powers and, in the long term, made possible an Austro-German alliance, achieved, in fact, in 1879.

For its part, Prussia annexed the states of Hanover, Hesse-Cassell, Nassau and Frankfurt (shown light blue on the map above) and in 1867 replaced the German Confederation by the North German Confederation, made up of all states north of the Mainz. Bismarck saw these moves as necessary steps towards the unification of Germany under Prussian leadership. Meanwhile, with no future part to play in Germany, and having been forced out of his other Italian possessions in 1859, Franz Joseph of Austria attempted to strengthen his position by gathering his remaining territories into the Dual Monarchy of Austria-Hungary (or the Austro-Hungarian Empire) in 1867.

xxxxxBy replacing Austria as the principal German power, Prussia emerged as a serious rival to France. As we shall see, the Franco-Prussian War of 1870 just four years later - yet another event engineered by Bismarck - was to see the unification of Germany, the establishment of the German E 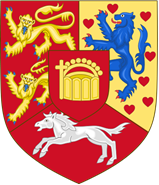 mpire, and a totally new balance of power on the continent of Europe.

xxxxxIncidentally, the personal union of Hanover with the United Kingdom ended in 1837 with the reign of Queen Victoria (because Hanover could only be inherited by males), but Prussia’s annexation of Hanover in 1867 severed the connection the British royal family had had with the House of Hanover (coat of arms illustrated) since the beginning of the reign of George I in 1714. This, plus the establishment of the German Empire a few years later, created a strain in Anglo-German relations.