xxxxxAs we have seen, the Popish Plot of 1678, though a fabrication, stirred up concern about the possibility of the Roman Catholic Duke of York succeeding to the English throne. The Rye House Plot was a plan to kill both Charles II and his brother as they passed by Rye House on the London Road in March 1683, on their way home from the races. The king happened to leave Newmarket earlier than expected, and the plot had to be abandoned, but a number of suspects were arrested as a means of disposing of some trouble makers. Four leading Whigs were convicted of treason on flimsy evidence by the notorious Judge Jeffreys. Three were beheaded, but the Earl of Essex died in the Tower, possibly by suicide. Meanwhile the most likely leader of the plot, the Duke of Monmouth, had fled to Holland, destined to return, as we shall see, to make a grab for the throne in 1685 (J2). 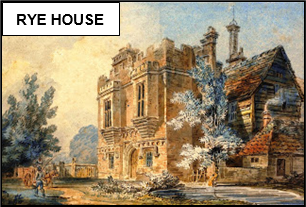 xxxxxAs we have seen, the Popish Plot of 1678, though sheer fabrication by the English cleric Titus Oates, stirred up a great deal of anxiety about the possibility of the Roman Catholic Duke of York succeeding to the English throne. The Rye House Plot, as it came to be known, was an ambitious conspiracy to assassinate both Charles II and his brother James, Duke of York, at a village called Hoddeston in Hertfordshire. The killings were planned to take place there some time in March 1683 as the couple passed by Rye House on the London road (home of one of the conspirators), on their way back from a race meeting at Newmarket. However, the king made an earlier departure than expected, and the plan had to be abandoned. Allegations followed, and ten weeks later, at the beginning of June, a government investigation was ordered. 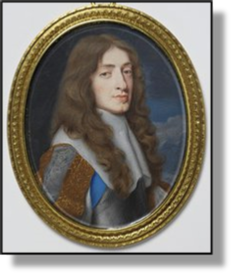 xxxxxIt would seem that the conspiracy was the work of a small number of extremists from the anti-Catholic Whig party who were prepared to conspire against the king because of his Roman Catholic leanings, and against his successor, the Duke of York, an avowed Roman Catholic (illustrated). Many of them escaped when the plot was discovered, but a number of arrests were made, and the government was able to use the incident to dispose of several troublesome leaders of the Whig party!

xxxxxWhen the investigation got under way, it was alleged that a number of Whigs had met at the house of a London wine merchant, and also at their own homes in order to discuss various conspiracies against the crown. Among those implicated and arrested were the Earl of Essex, Sir Thomas Armstrong, Lord William Russell and Algernon Sidney. Essex died in the Tower - possibly a case of suicide - but the last three were convicted of treason on somewhat flimsy evidence and beheaded. Meanwhile the Duke of Monmouth, the most likely leader of the plot, had fled to Holland.

xxxxxThe judge in the trial of the conspirators was the notorious Judge Jeffreys who, as we shall see, was to play so prominent a part in the affairs of state when the Duke of Monmouth returned to England and made a grab for the throne in 1685 (J2).