xxxxxAs we have seen (1072 W1), the Norman Kingdom of Sicily was founded by Robert Guiscard and his brother Roger. Roger's son Roger II, an astute and ambitious man, came to power in 1105 and by 1128 had acquired large tracts of land, and been invested by the pope as Duke of Apulia, Calabria and Sicily. But he was really after a king's crown. This he achieved in 1130 by supporting the antipope Anacletus II. When Anacletus died, Roger defeated a papal army at Galluccio and forced the new pope, Innocent II, to recognise his title. Ruling as a despot, his kingdom flourished. His extravagant court became a recognised centre of culture, remarkable for its political and religious tolerance, and his building of a highly efficient and powerful navy successfully safeguarded the trade upon which his country depended. 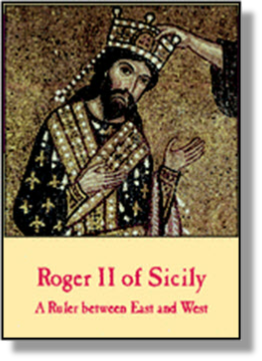 xxxxxAs we have seen (1072 W1), the foundations of the Norman Kingdom of Sicily were laid by Robert Guiscard, known as "the Fox". By this date this Norman adventurer had driven the Byzantines out of most of southern Italy and, with the aid of his brother Roger, had begun the task of throwing the Saracens out of Sicily. Following the capture of Palermo, the turning point in the conquest of the island, he appointed Roger Count of Sicily.

xxxxxRoger II was the son of Roger I, Count of Sicily, and his third wife, Adelaide of Savona. He succeeded to the title in 1105. He was an astute, ambitious man, and his cousins, the son and grandson of Robert Guiscard, proved no match for his unique brand of armed diplomacy. By 1128 he had acquired large tracts of land and, in that year, was invested by the Pope, Honorius II, as the Duke of Apulia, Calabria and Sicily. He now needed a crown by which he could unite his triple duchy into a single and by no means insignificant nation. His opportunity came two years later when a dispute arose over the papal succession. Roger supported the antipope, Anacletus II, on condition that he crowned him the fir 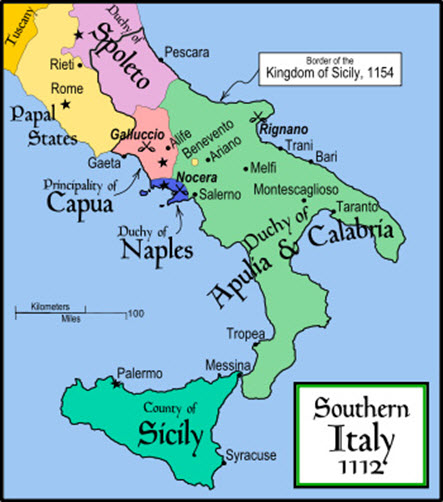 st King of Sicily. This he did in Palermo cathedral on Christmas Day 1130. On the death of Anacletus, he defeated the papal army at Galluccio and forced the Pope, Innocent II, to recognise his title together with an extended authority over all of Italy south of the River Garigliano.

xxxxxUnder his despotic leadership the new, multi-racial kingdom prospered. Norman though he was by birth, he took on the mantle of a magnificent Byzantine monarch, ruling as an absolute leader under God's guidance. His administration, made up of Normans, Greeks and Arabs, became a byword for efficiency, whilst his extravagant court was regarded as the centre of intellectual excellence, a cosmopolitan meeting place of learned men - philosophers, mathematicians, doctors, poets, geographers - from different races, cultures and creeds.

xxxxxIn the defence of his realm, he is remembered above all for his powerful navy, a vital force in safeguarding the trade upon which his nation so much depended. Staffed mainly by Greeks and commanded by a leader with the Arabic title of Emir (hence the word "admiral"), it was active in the Mediterranean throughout the years of his reign, attacking the Greek coast, capturing Corfu, and, at one time, invading Tunisia and virtually making it into a trading colony.

xxxxxRoger II spent much of his life in Palermo and it was here that he died in 1154 at the age of 58. He was buried in the cathedral of Palermo where, twenty-four years earlier, he had received the crown of a kingdom which he was to make remarkable for its political and religious tolerance. Under his successors, however, notably William I (1154-1166 ) and William II (1166-1189) the impressive multi-racial civilisation of Sicily gradually went into decline, and with the death of Tancred of Lecce, grandson of Roger II, in 1194, Norman rule came to an end. 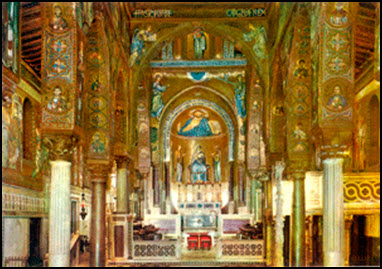 xxxxxIncidentally, tangible evidence of the religious and political tolerance within this mixture of cultures and creeds is to be seen in the Palatine Chapel in Palermo. Commissioned by Roger in 1132 and taking eight years to complete, the stout doors are Norman, the magnificent dome and exquisite mosaics are Byzantine, the graceful arches are Saracenic, and the roof is decorated with Arabic scripts. And a Christian cross on the ceiling is formed by clusters of eight-pointed stars, a typical Muslim design. ……

xxxxx …… Among the many scholars who worked at the Norman court at Palermo was the Arab traveller and geographer Mohammad al Idrisi. As we shall see, it was in 1154 (ST) that he completed his huge, detailed map of the world - compiled in seventy sections and covering Europe, Asia and North Africa - and also his The Book of Roger, a compendium of knowledge about the geographical, political and cultural conditions prevailing in each of these seventy areas.