xxxxxGeorge III’s eldest son, George, Prince of Wales, had rebelled against his father’s authority from an early age. By his twenties he was heavily in debt through gambling and his excessive life style. A drunkard and a womaniser, he also angered his father by supporting the Whigs, his political opponents. He married Caroline of Brunswick in 1795 in the hope that parliament would pay off his debts, but after the birth of their daughter, the marriage broke up. In January 1811, when the king was no longer fit enough to rule, George became Prince Regent, but he remained unpopular throughout the country. At a time of economic and social depression, there was anger over the way he treated his wife, his own extravagant living, and the vast sums of money spent on ambitious architectural schemes. Amid a number of protests, an attempt was made on his life in January 1817. As we shall see, he came to the throne as George IV following the death of his father in 1820. 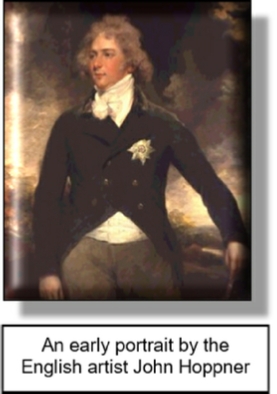 xxxxxBy 1810 it had become abundantly clear that George III was no longer fit to rule. As we have seen, he had suffered a number of mental breakdowns throughout his reign - particularly in 1788 - and had managed to recover from them, but soon after the turn of the century his condition began to deteriorate, and there was no possibility of improvement. In February 1811 his eldest son George, Prince of Wales, a man whom he greatly despised, was established as Prince Regent, and George III was confined to Windsor Castle, where he spent the last nine years of his life blind and insane. The Regency of “Prinnie”, as he was known by his close friends, was not welcomed by most of the establishment and virtually all of the general public. They had little or no time for the Prince of Wales. A notorious drunkard, gambler and womaniser from an early age, his excessive life style was seen in stark contrast to the decent, domestic life led by his father, now a popular figure in his declining and troubled years.

xxxxxThe young prince had rebelled against his father’s strict upbringing in his teens, and perhaps not without some reason. However, his rebellion was, to say the least, over the top. At the age of 18 he was spending some £10,000 a year on clothes alone, and he was deeply in debt by his early twenties. In 1795 these debts had risen to £650,000, the result, for the most part, of lavish entertaining, impulsive gambling, and exorbitantly expensive architectural schemes in faddish new styles. A perfect butt for the cartoonist and satirist, he quickly became a man of avant-garde fashion, a portly, indolent dandy who saw himself as “the first gentleman of Europe”. To protect himself from the barbs of the critics, the anger of his father, and the growing disapproval of the country at large, he surrounded himself with a small band of courtiers who valued his friendship as a social investment, opposed his father’s political views, and were themselves lovers of the good life. 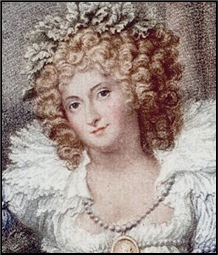 xxxxxAnd, as one would expect, this constant pursuit of pleasure included a string of mistresses, a not uncommon indulgence for the aristocracy of his time. At the age of eighteen he was in a relationship with a Mrs Perdita Robinson, a married actress, and this was followed by a liaison with Lady Melbourne. His longest and most controversial attachment was to a catholic widow named Mrs Maria Fitzherbert, from whom he borrowed large sums of money. It was said that because she had refused to be his mistress, he had secretly married her in December 1785. If such were the case then the marriage was null and void on two counts: he did not have his father’s permission - and would not have got it! - and, by the Bill of Rights, the monarch was not permitted to marry a Roman Catholic. The detail of herxportrait here is a coloured printed stipple engraving by the French artist Jean Condé (1725-1794), after a work by the Englishman Richard Cosway (1742-1821), one of the most talented miniature portrait painters of the 18th century. 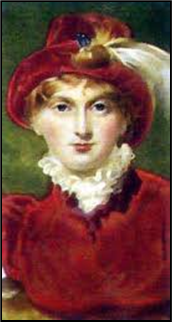 xxxxxAnother woman in his life, but not for long, was his wife and cousin Caroline Brunswick (illustrated). He reluctantly agreed to marry her in 1795 in the belief that Parliament would then pay off his debts. He was therefore furious when more than half his marriage settlement, together with his income from the Duchy of Cornwall, was set aside for that purpose, leaving him worse off than when he was a bachelor! Soon after the birth of their daughter, Princess Charlotte, the couple lived apart. He managed to prevent her from claiming official royal privileges, but his efforts to divorce her, which required the consent of a hostile parliament, ended in failure, despite her own infidelity. Needless to say his treatment towards his wife won her much public support, and added further to the widespread dislike of the Prince Regent. And, as we shall see, this estrangement was to be the cause of a public scandal when George came to the throne in 1820.

xxxxxIn the matter of politics, the young George greatly angered and embarrassed his father by supporting his opponents. Whilst the king favoured Tory ministers, George cultivated a friendship with the Whigs, cavorting with the likes of Charles Fox and Richard Sheridan, and advocating such measures as Catholic Emancipation and parliamentary reform. Once in power, however, he became an ardent Tory, and discarded such progressive policies. However, this did not stop him opposing some measures put forward by the ministry of Lord Liverpool. Furthermore his royal duties were reluctantly and often tardily carried out. He seldom allowed the demands of state to impinge upon his pleasurable activities. 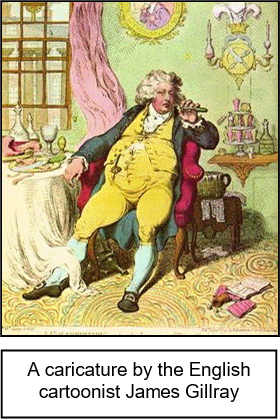 xxxxxAnd, as we have seen, his period as Regent was marked by an extensive building programme, carried out in the main by his friend, the London architect John Nash, much of it in the classical “Regency Style”. This ambitious programme included the development of Regents Park and its environs, and the building of the exotic Royal Pavilion at Brighton. Such projects have since become national treasures, but at the time of their building their enormous cost was seen against the period of severe economic depression which followed the ending of the Napoleonic Wars. The need was for tax cuts, and a reduction in public expenditure, not extravagant architectural ventures for the well-off. Indeed, the social and economic distress of this regency period gave rise to a number of violent protests, some led by the Luddites. And these protests included an attack upon the life of the Prince Regent himself. This occurred in January 1817 when he was on his way to open a new session of parliament. His carriage was mobbed, and one of the windows was smashed, either by a stone or a bullet. This led to a wave of repressive legislation not seen since the early days of the French Revolution. Known as the “Gag Acts”, they included the suspension of the Habeas Corpus Act, the prohibition of all reforming societies and clubs, and the banning without prior consent of meetings of more than fifty people. As we shall see, soon after these measures were lifted a large meeting was held at Manchester in August 1819 to demand parliamentary reform. It was dubbed the “Peterloo Massacre” after it was harshly broken up by military action.

xxxxxIn January 1820 George III died at Windsor Castle, after a reign of almost 60 years, and the Prince Regent came to the throne as George IV. Extremely overweight and in poor health, it was not long before he himself was showing the first signs of insanity. As we shall see, his reign was never popular and very few mourned his passing in 1830.

xxxxxIncidentally, when the architect John Nash redeveloped the Royal Pavilion in Brighton, an underground passage was dug to link the Prince’s pleasure palace with the nearby home of his “wife”

xxxxx…… It could well be assumed that the nursery rhyme Georgie Porgie was directed at the Prince Regent. He was certainly fond of his “pudding and pie” and, in his time, he “kissed a few girls and made them cry”! In fact, however, the rhyme dates from the Stuart era, and almost certainly refers to the handsome George Villiers, lst Duke of Buckingham. He was a favourite of both James I and Charles I, and his notorious love affair with Anne of Austria, the Queen of France, is featured in Alexandre Dumas’ The Three Musketeers. ……

xxxxx…… We are told that when George died, the loose change found in the pockets of his hundreds of suits amounted to close on £10,000! A little hard to believe! ……

xxxxx…… Numbered among the Prince Regent’s inner circle of friends was the English dandy George Bryan Brummell (1778-1840), known in high society as Beau Brummell. As a recognised arbiter of fashion, it was he who made popular the wearing of trousers and introduced foppish cravats. It is said that he changed his shirt three times a day, and that no party gathering was a success without he put in an appearance. However, he later offended the Prince by his sharp, witty comments - on one occasion he publicly referred to him as “fat” - and fell out of favour in 1812. Four years later, after accumulating large gambling debts, he fled to France to escape his creditors. There, however, he again ran into further debt, and after a short stay in prison, ended his days in a charitable asylum in Caen. 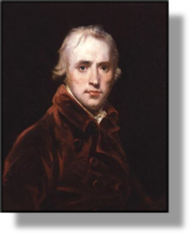 xxxxxThe artist John Hoppner (1758-1810), born in London but of German extraction, was portrait painter to the Prince of Wales from 1789. One of his portraits of the prince can be seen above. He went to study at the Royal Academy in 1775, and in 1782 won the Academy’s highest award, the gold medal, for his interpretation of a scene from Shakespeare’s King Lear. Finding that there was little money to be found in landscape painting, he turned to portraiture, and three years later he gained prominence with his charming, graceful portraits of the three youngest princesses, Sophia, Amelia and Mary. From then on his reputation grew, and he painted many leading and fashionable figures of his day, including William Pitt and Admiral Nelson. (His portrait of Mrs Williams, now in the Tate Gallery, London (and illustrated below), is considered to be one of his finest works). He was made a member of the Royal Academy of Art in 1795, and much of his work, closely based on the early style of portraiture introduced by Sir Joshua Reynolds, rivalled that of the king’s painter, Thomas Lawrence, in popularity.