xxxxxAs we have seen, the King George's War which broke out in 1740 was an intensification of the struggle for power in North America between the British, French and Spanish. The British seized the fort of Louisbourg, but gave it up at the Treaty of Aix-la-Chapelle in 1748. The French soon returned to the attack, and by 1756 had overrun the Ohio Valley, defeated the British in battle, and seized two of their forts. With the coming of the Seven Years War, however, in 1756, the tide turned. General James Wolfe (1727-1759) captured the fort of Louisbourg and then, in 1759, marched on Quebec. He was obliged to lay siege to the city for two months, but in September he learnt of a narrow path up the cliff face, and this enabled some 4,000 of his men to scramble onto the Plains of Abraham alongside the city. Here they quickly defeated the French force and seized Quebec, but both commanders, General Wolfe and the Marquis de Montcalm, were killed in the action. This victory, plus the defeat of the French navy at the Battle of Quiberon Bay, and the capture of Montreal the following year, made the British virtual masters of North America.

xxxxxAs we have seen, the King George's War, which broke out in 1740, was an intensification of the struggle for power which had been raging for decades between the British, French and Spanish colonists in North America. An off-shoot, as it were, of the War of the Austrian Succession in Europe, it was brought to an end by the Treaty of Aix la Chapelle in 1748, but not before the British had managed to capture the French fortress of Louisbourg. 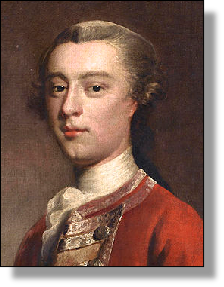 xxxxxBy this peace treaty, however, Louisbourg was returned to France, and in the early 1750s the French resumed the battle in earnest, overrunning the Ohio Valley, defeating a British force near Fort Duquesne, and capturing the forts of Oswego and William Henry. But, as we have seen, with the outbreak of the Seven Years War in 1756, the British command of the sea - enabling the sending of more men and materials - began to tell, and the tide turned in their favour. In 1757 the secretary of state for foreign affairs, William Pitt (the Elder) appointed General James Wolfe (1727-1759) (illustrated), a veteran of Dettingen, Falkirk and Culloden, as the deputy commander in North America. A dedicated and brilliant soldier, he quickly justified his appointment by capturing the French fortress of Louisbourg. As a consequence, he was then put in command of a military and naval expedition against Quebec, the capital of New France and a key position. 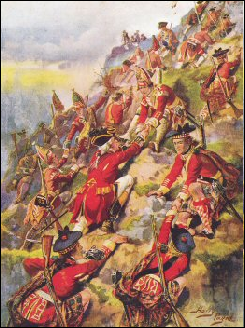 xxxxxIn June 1759, with a force of 250 ships carrying some 9,000 regulars, he sailed up the Saint Lawrence River and, anchoring off the Isle d'Orleans, set up his camp alongside the Montmorenci River. The following month he launched a direct attack upon the French, but, unable to scale the high cliffs protecting Quebec, he was forced to lay siege to the city. It was not until early September, in fact, that, learning of a narrow cliff path further down stream, he was able to plan a surprise assault. He feigned a frontal attack against the city on the 12th September and, in the meantime, moved some 4000 of his men along the St. Lawrence, landing them at nightfall on the north bank of the river at a point about a mile and a half south-west of Quebec. From here, his men clambered up the steep cliff face and, reaching the Plains of Abraham alongside the upper part of the city, forced the French to do battle. The conflict lasted less than an hour. The British musket fire soon broke the French line. They took flight, and Quebec surrendered four days later. In the conflict, however, the commanders of both armies were mortally wounded. Wolfe died on the battlefield and the French general, the Marquis de Montcalm, died the following day.

xxxxxIn the same year a large part of the French fleet was destroyed at the Battle of Quiberon Bay (off the coast of France near St. Nazaire) and this, together with the capture of Montreal the following year, gave Britain virtual control over the greater part of the North American continent, a situation which, as we shall see, was confirmed by the Treaty of Paris in 1763 (G3a).

xxxxxIncidentally, a young sailor aboard the Mercury named James Cook took part in the capture of Louisbourg and Quebec. He also chartered parts of the Saint Lawrence River during the siege, and some accounts suggest that these soundings contributed to the success of Wolfe's night landing. 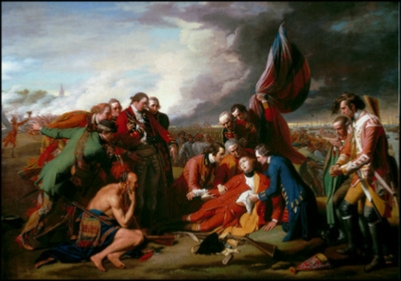 xxxxxA dramatic portrayal of the Death of General Wolfe (illustrated here) was painted in 1770 by Benjamin West (1738-1820), the first American artist to gain an international reputation. He spent much of his life in England, where, in his day, he gained an enviable reputation for his historical, religious and mythological paintings.

xxxxxWest was born in Springfield, Pennsylvania, the tenth child of an innkeeper. He had little formal education or artistic training, but his skill as a painter was recognised in 1756 with the completion of his first historical painting The Death of Socrates. Encouraged and assisted, amongst others, by Dr William Smith, the provost of the College of Philadelphia, and the politician and scientist Benjamin Franklin, he spent three years in Italy, making a special study of the works of Titian and Raphael, before settling in London in 1763. 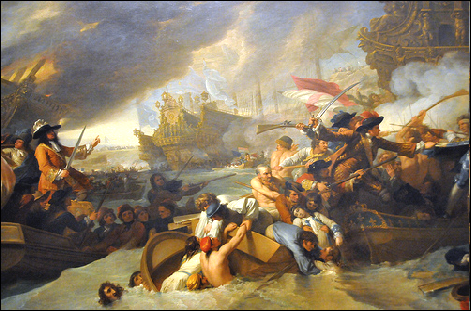 xxxxxIn England his neoclassical historical paintings in particular - large in scale and cleverly stage managed by his shrewd use of light, colour and composition - quickly gained approval. Notable among these were The Burghers of Calais, Cromwell Dismissing the Long Parliament, The Battle of La Hogue (illustrated), William Penn’s Treaty with the Indians, The Battle of the Boyne, and one of his most famous works, the Death of Lord Nelson. And in addition to these “epic representations”, as he called them, he produced a large number of works with religious and mythological subjects, such as The Last Supper, The Ascension of Christ, and Thetis brings Armour to Achilles. Among his portraits were those of the American politician and scientist Benjamin Franklin, and the English botanist Joseph Banks. 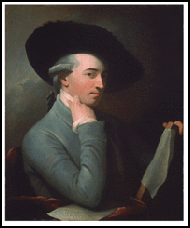 xxxxxFollowing his successful Death of James Wolfe, West was appointed historical painter to the royal court. In this office he painted portraits of George III and members of the royal family. Then in 1791 he was designated surveyor of the King’s pictures, a position he held until his death. And earlier, in 1868, West assisted his friend, the famous English artist Sir Joshua Reynolds, in the founding of the Royal Academy of Arts and, following Reynold’s death in 1792, served as the Academy’s President for more than twenty five years. During his successful career in London he taught and befriended a number of young American artists, including John Trumbull, Charles Wilson Peale, and Gilbert Stuart. (Illustrated here is a self-portrait.)

xxxxxIncidentally, earlier, in 1763, the English fashionable portrait painter George Romney also recorded on canvas the death of James Wolfe, and it won him an award from the Royal Society of Arts. ……

xxxxx…… Despite his humble beginnings, West was certainly not lacking in confidence. He mixed freely in London’s high society - including royalty - and, when offered a knighthood by King George, turned it down because he thought he was worthy of a peerage!

xxxxxThe death of General James Wolfe was recorded by the American artist Benjamin West (1738-1820) in 1770. It was one of the many large-scale historical paintings he produced in neo-classical style. These included The Burghers of Calais, Cromwell Dismissing the Long Parliament, William Penn’s Treaty with the Indians, The Battle of the Boyne, and one of his most famous works, the Death of Lord Nelson. Among his other works were the depiction of religious and mythological events, and the portraits of the American politician and scientist Benjamin Franklin, and the English botanist Joseph Banks. West was born in Springfield, Pennsylvania, in 1738, but, after studying in Italy, he settled in London in 1763, and remained in England until his death in 1820. He served as historical painter to George III, and after assisting his friend Sir Joshua Reynolds in the foundation of the Royal Academy of Arts, was the Academy’s president for over 25 years. Among the young American artists whom he taught and befriended were John Trumbull, Charles Wilson Peale, and Gilbert Stuart.