xxxxxThe Thirty Years’ War ended in 1648 (C1), but the war between France and Spain continued on for more than a decade. France had emerged from the war as a major power and wanted to stay that way. The French minister, Mazarin, even joined forces with Cromwell’s Commonwealth in 1657, and together they defeated the Spanish at the Battle of the Dunes the following year. For Spain, already in decline as a nation, the final blow came in August 1658 when a French alliance with a number of German states ended any hope of help from the Habsburgs. At the Treaty of the Pyrenees in 1659 Spain gave up all her land north of this mountain range, which then became the accepted boundary with her neighbour, France. In addition, a marriage was arranged between Marie Theresa, daughter of the Spanish king, Philip IV, and Louis XIV, a union which, as we shall see, was to have serious political repercussions in 1702 (AN). 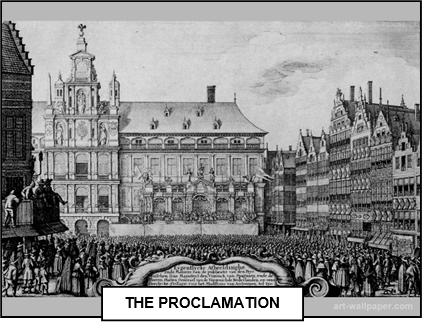 xxxxxAs we have seen, it was in 1635 (C1) that the French (led by Cardinal Richelieu) entered the Thirty Years' War. So deeply concerned were they about the growing might of the Habsburg dynasty - both the Austrian and Spanish branches - that they allied themselves with the Protestant cause, then led by Sweden, the United Provinces and a number of German princes. Despite a serious defeat at the Battle of Tuttlingen in 1643, their generals - notably Turenne and Condé - won a string of victories against the imperial forces, whilst a number of Spanish attacks into France were successfully met and repelled. When the war eventually came to an end in 1648 (C1), the Peace of Westphalia (illustrated), brought about a general European settlement that virtually marked the end of the Holy Roman Empire. Some 300 imperial principalities were granted independence, thereby making the Emperor a shadow of his former self. Willingly assisted by her Protestant allies, France had emerged as a major European power.

xxxxxFor Spain it was quite a different story. For some time the country had been in political and economic decline. During the reign of the weak Philip IV (1621-65) the rot really set in. The war to retain the Netherlands rumbled on with no sign of an end, and in 1640 a national revolt erupted in Portugal and overthrew Spanish rule after sixty years of "Captivity". At the same time Spain struggled to support the Habsburg cause in Germany during the Thirty Years’ War, and found herself at war with France as from 1635. At home matters were no better. In 1640 the government was faced with a major rebellion in Catalonia in the north-east. The region revolted and, placing itself under French protection, was not fully reclaimed until 1659. And when the Peace of Westphalia came in 1648, Spain was finally obliged to recognize the independence of the seven northern regions which made up the United Provinces of the Netherlands. 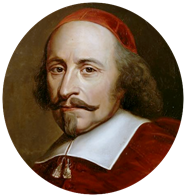 xxxxxBut the end of the Thirty Years' War did not settle matters between the French and the Spanish, far from it. The independence of the Dutch Republic had actually been recognized by Philip IV in January 1648, before the Peace of Westphalia, and by this settlement Spain had agreed to a comprehensive trade agreement between the two countries. On the strength of this understanding, Spain refused to agree to the general peace treaty. As one might imagine, this alarmed Jules Mazarin, the French leader (illustrated). He could see a situation in which Spanish forces could be openly deployed in the Low Countries, posing a serious threat to the security of northern France. He maintained the war with Spain and, at the same time, renewed a military offensive along the French frontier with Germany, taking new territory in order to prevent the Spanish from receiving any aid from the Austrian Habsburgs.

xxxxxThe Franco-Spanish war that followed was one of continuous conflict. InxMarch 1657, in order to increase pressure on Spain, France formed an alliance with England's Commonwealth. In June the following year the two countries combined forces and gained a victory over the Spaniards at the Battle of the Dunes, fought near Dunkirk (then in the Spanish Netherlands). Some 6,000 Commonwealth infantry took part and, after the battle, England gained possession of the port of Dunkirk. Faced with this defeat, Spain's will to fight began to crumble. The last straw came in August 1658 when Mazarin organized the League of the Rhine, a defensive alliance with German states along the French border. Denied any hope of assistance from the Habsburg Emperor, the Spanish sued for peace. 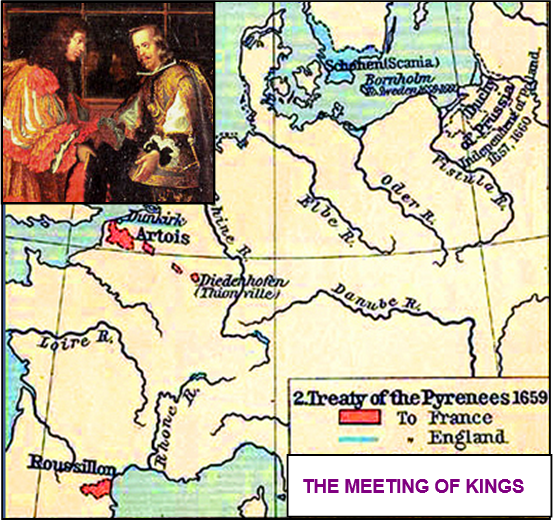 xxxxxThe Treaty of the Pyrenees took place between Louis XIV of France and Philip IV of Spain in November 1659 on a neutral island in the River Bidassoa, near Hendaye in France (illustrated). Spain ceded the province of Roussillon, thus making the Pyrenees the boundary between the two countries, and, in the north, relinquished the region of Artois and parts of Hainault, Flanders and Luxembourg. The French acquisition of Alsace and Lorraine from the Holy Roman Empire, negotiated at the Peace of Westphalia, was also ratified, and all land conquered by the French in Catalonia was restored to Spain.

xxxxxLast but by no means least, the terms of the treaty also agreed to the marriage of Marie Theresa, daughter of Philip IV, to Louis XIV. The marriage took place the following year. By its terms, the Infanta renounced all her rights to the Spanish crown or Spanish possessions but, as we shall see, this proviso was conveniently ignored by the Sun King when it suited his purpose, and this was to lead to the War of the Spanish Succession in 1702 (AN). In the meantime, this marriage compact in particular, and the Treaty of the Pyrenees in general, were a triumph for the French statesman Jules Mazarin. By it France was to become the most powerful monarchy in Europe.

xxxxxIncidentally, at the Battle of the Dunes, English forces fought on both sides. A contingent of English royalists commanded by the Duke of York (later James II) fought on the Spanish side against a Commonwealth infantry force. Following the Anglo-French victory, the English royalist forces melted away and rejoined their king, “Charles II”, at Ypres.