xxxxxIt was in 1258 that Henry III summoned Parliament. He had promised the Pope money in order to have his second son, Edmund, put on the throne of Sicily - a crazy idea - and then fallen short of the cash. Parliament granted him the money, but on its own terms. By the Provisions of Oxford a council of 15 barons was drawn up to “advise” the king, and Parliament was to be called three times a year to discuss any future “reform”. The king reluctantly agreed, but three years later he had the pope annul the agreement, and he got Louis IX of France, acting as an “arbitrator”, to condemn the Provisions in a ruling known as the Mise of Amiens. As we shall see, it was this last judgement which triggered off The Barons’ War, led by Simon de Montfort, and brought about the defeat of the king at the Battle of Lewes in 1264. 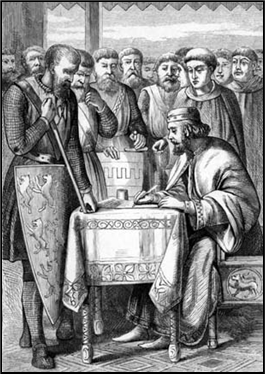 xxxxxIn the spring of 1258 Henry, badly in need of ready cash, summoned parliament. He had entered into a foolhardy scheme with the Pope whereby his second son, Edmund, was to gain the throne of Sicily in return for a handsome donation to papal funds, and he now found that he did not have sufficient money. Parliament, sometimes known as the Easter or Mad Parliament, was convinced that the scheme would be a failure - as it proved to be - and saw this as an ideal opportunity to curb the power of the king with regard to his extravagance and ill-conceived policies. A grant of revenue was agreed but, in return, Henry was obliged to accept a far-reaching programme of reform.

xxxxxThis programme was drawn up by a twenty-four man royal commission, half appointed by the king and half by the barons. In June this commission produced what came to be known as the Provisions of Oxford. By these measures, which were to be effective for twelve years, a council made up of fifteen barons was to advise the king on all affairs of state and to oversee their administration. Furthermore, Parliament was to meet three times a year to discuss the possibility of further reforms. 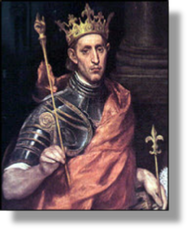 xxxxxHenry reluctantly agreed to these provisions, but he renounced them in 1261 - following a dispute between the barons themselves - and also sought outside support. The provisions were annulled by papal bulls (edicts) in 1261 and 1262, and then early in 1264 Louis IX of France (illustrated), acting as an arbitrator, roundly condemned them in his ruling known as the Mise of Amiens. As we shall see, it was this last judgement, in fact, which triggered off The Barons’ War, led by Simon de Montfort, and was to bring about the defeat and capture of the King and his son Edward at the Battle of Lewes in 1264. The Provisions were finally annulled by the Dictum of Kenilworth in October 1266. By this time, however, Henry was monarch in name only; his more able son Edward had become the power behind the throne.