xxxxxRichard Cromwell (1626-1712) served as both a soldier and a member of parliament, but he had nothing of his father’s drive and ability. On becoming Protector in 1658, he proved unable to cope with the demands of this office. He escaped to Paris in 1660, and lived a quiet life on returning to England in about 1680. In 1660 a section of the Army took the initiative and invited Charles Stuart to return as monarch. 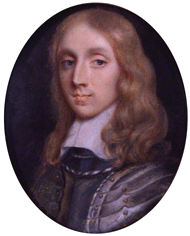 xxxxxRichard Cromwell (1626-1712), son of Oliver Cromwell, served in the Parliamentary army in the Civil War and, during the Commonwealth, was a member of two parliaments. He joined the council of state in December 1657, but he showed nothing of his father's drive and ability. On becoming Protector in September 1658, he found himself unable to deal with the conflicting demands of army and parliament. He took personal command of the army, but in doing so offended its senior officers. They appointed their own council to manage the affairs of state, and when this was challenged by parliament, the council seized power and forced Richard to dissolve parliament.

xxxxxThe Rump was then recalled in May 1659, but by then Richard had simply left office. In 1660 he escaped to France, leaving a string of large debts behind him, and lived in Paris under the name of John Clarke. He later moved to Geneva, and did not return to England until around 1680, where, using a false name, he resided quietly at Cheshunt, Hertfordshire, until his death in 1712.

xxxxxAs we shall see, in the power vacuum that followed Richard Cromwell’s departure, the Rump proved ineffective, and it was left to one element of the army to take power into its own hands and engineer the return of the monarchy in 1660.