xxxxxThe German composer and music theorist Michael Praetorius was one of the most versatile and prolific musicians of his age. As a composer he is remembered for his wealth of church music, particularly his nine-volume Musae Sioniae, completed in 1610. This comprised of more than 1,200 choral settings, the majority based on Protestant hymns. As a musical historian, his Syntagma musicum, finished in 1620, provides an invaluable source of information about the music and the musical instruments of the 16th and early 17th century, and is regarded today as one of the finest examples of musical scholarship in existence. He spent much of his musical career as an organist and music master in the employ of the Duke of Brunswick-Wolfenbüttel and of the Elector of Saxony. He died in Wolfenbüttel and is buried in St. Mary’s Church within the town. 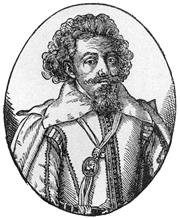 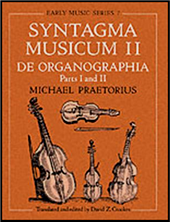 xxxxxThe German composer, organist and music theorist Michael Praetorius was one of the most versatile and prolific musicians of his age. He is particularly remembered today for the development he made in musical forms, based on Protestant hymns, and for his Syntagma musicum, an outstanding and historically important treatise on the music and the musical instruments of the 16th and early 17th century.

xxxxxHe was born in Creuzburg, Thuringia, the youngest son of a Lutheran pastor, and studied divinity and philosophy at the University of Frankfurt on the Oder. As a musician he was largely self-taught, and began his career in 1587 as an organist in the city’s church of St. Marien. In the early 1590s he entered the service of the Duke of Brunswick-Wolfenbüttel, first as an organist and then as Master of the Duke’s music as from 1603. In this capacity he travelled widely in central Germany, and it was while so doing that he gained an expert knowledge of current musical trends and the different musical instruments in use. After the Duke’s death in 1613, he worked at the court of the Elector of Saxony at Dresden, responsible for the production of festival music. He died at Wolfenbüttel and was buried in a vault beneath the organ in St. Mary’s Church within the town. He left a large fortune, most of which was used to set up a foundation for the poor. 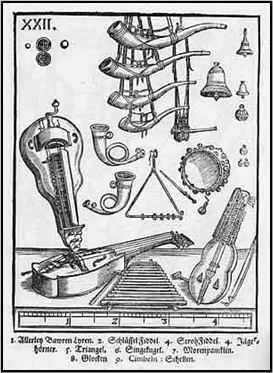 xxxxxHis first compositions date from around 1602, and his most productive years began some two years later. He wrote a large amount of church music, outstanding among this being his marathon nine-volume Musae Sioniae, begun in 1605 and completed five years later. This comprised of more than 1,200 choral settings, based upon Protestant hymns and the Latin liturgy used in Lutheran services. He also produced an amount of secular work, but all that has survived is a compendium of some 300 instrumental folk dances. His major work as a musical historian, his Syntagma musicum, was completed in 1620. Comprised of three volumes - though others were intended - this comprehensive treatise on the theory of music covered religious music of his day and - particularly valuable - an account of the current musical instruments, enhanced by 42 beautifully drawn woodcuts (one here illustrated). This work ranks as one of the finest examples of musical scholarship in existence.

xxxxxIncidentally, Praetorius was born Michael Schultze. The surname means “mayor” or “magistrate” in German, and he chose to take the Latin translation. ……

xxxxx…… Praetorius made use of the bagpipe in some of his music. One of the oldest known instruments, it was highly popular in his time.