xxxxxAfter a period as professor of law at Bologna, the Italian scholar Orlando Bandinelli served as the chief negotiator between the pope and the ambitious German emperor Frederick Barbarossa, bent on reducing the power of the church, and expanding his authority into Italy. Bandinelli argued that the empire was, in fact, a "benefice of the papacy". It is hardly surprising therefore that in 1159, when he was elected pope as Alexander III, the Emperor should openly support an anti-pope and invade Italy. Alexander was forced to take refuge in France, but he returned in 1165 and two years later gained the support of the Lombard League, an alliance of the city states. With their victory over the Emperor at the Battle of Legnano in 1176, Frederick I admitted defeat and even accepted papal authority in 1177. It was Alexander III who gave support to Thomas Becket during his dispute with Henry I of England, and, after Becket's murder in 1170, imposed a penance on the king before granting him a pardon. 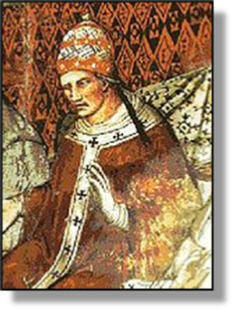 xxxxxPope Alexander was born Orlando Bandinelli in Siena in 1105. He studied theology and law, and, following a period as professor of law at Bologna, he advanced rapidly within the Church. Under Pope Adrian IV he served for a time as the chief negotiator between the Pope and the Holy Roman Emperor Frederick Barbarossa, an ambitious ruler who sought to reduce the power of the Church and extend his authority into Italy.

xxxxxTo balance this threat, Bandinelli advised that papal support be given to the Norman kingdom of Sicily. In political matters, he argued, the empire was, in fact, a "benefice of the papacy". It was not surprising, therefore, that when elected as Pope Alexander III in 1159 he was at once opposed by an antipope, Victor IV, a protégé of Frederick Barbarossa. Such was the power of the Emperor that in 1162 he was obliged to take refuge in France. It was from here that he gave support to Archbishop Becket in his bitter struggle with Henry II, roundly condemning certain aspects of the Constitutions of Clarendon. And later, when Becket was murdered in 1170, it was Alexander who imposed penance upon King Henry I before granting him pardon.

xxxxxBut whilst the Pope gained mastery over the English king, his struggle with the German emperor (illustrated) continued unabated. He did return to Italy in 1165, but when in the following year Frederick led yet another invasion force into of Italy – he led six in all - he was again forced into exile. Ecclesiastically, right was on his side - his having been fairly and squarely elected by a majority of cardinals - but he lacked support at ground level, on the battlefield, and that is where it mattered. However, all this changed in 1167 with the formation of the Lombard League, an alliance of the major city states of northern Italy, each determined to maintain its independence from the Empire. Alexander sought and received their support and in 1176 the League gained a resounding victory over the imperial army at the Battle of Legnano. With the Peace of Venice the following year, 1177, the independence of the city states was assured and the Emperor publicly recognised Alexander III as Pope in front of St. Mark's cathedral.

Alexander III: detail from a fresco by the Italian painter Spinello Aretino (c1350-c1410) – Palazzo Pubblico, Siena. Frederick I: detail from a medieval illustration from The Chronical of the Guelphs, artist unknown – Weingarten Abbey, Württemberg, south-west Germany.