xxxxxAs we have seen (1702), the Swedish king Charles XII won a series of victories in the early days of the Great Northern War. By 1706 he had knocked Denmark out of the conflict, defeated the Russians at the Battle of Narva, and occupied Poland. However, by the time he invaded Russia in 1707 Peter the Great had rebuilt his army and navy. Advancing deep into Russia, the Swedish army ran out of supplies and became bogged down. They turned into the Ukraine and it was there they fought the Battle of Poltava in 1709. Though outnumbered in men and guns, the Swedes attacked, but their army was virtually annihilated. This defeat marked the end of Sweden’s bid for big power status. Charles managed to escape, but, on his return to Sweden, was killed in a war against Norway in 1718. As we shall see, by the Treaty of Nystadt in 1721 (G1), Russia emerged as a European power; gained command of the Baltic; and built St. Petersburg, Peter’s longed-for “window on the west”.

xxxxxAs we have seen, (1702), in the early years of the Great Northern War which broke out in 1700, the young Swedish king, Charles XII, won a series of victories. By 1706 he had knocked Denmark out of the conflict, defeated the Russians at the Battle of Narva, occupied Poland, and toppled the Polish king, Augustus II, from his throne in favour of his own candidate. However, by the time he turned his attack upon Russia, Peter the Great, had built a large navy of some 50 battleships, modernised his army on Western lines, and even started to attack and occupy some Swedish territory along the east coast of the Baltic Sea. Sweden's hero king faced a daunting task. 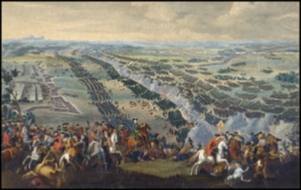 xxxxxTaking, as always, the direct approach, Charles launched his attack on Russia in the autumn of 1707. He won the opening Battle of Holowczyn in July of the following year, but from then on the Russians dictated the course of the war. By adopting scorched-earth tactics they drew the Swedish forces further and further into Mother Russia whilst, at the same time, attacking their lines of supply and communication to the rear. By the summer of 1709 Charles was forced to abandon his advance on Moscow and turn into the Ukraine. His army was close to starvation and had suffered greatly during two severe winters. To make matters worse, a heavily laden supply column had failed to get through, bogged down in thick mud and destroyed by enemy action. Like future commanders who dared to invade Russia, he was now faced with a stark choice. Stand and fight or cut and run. Not surprisingly, Charles chose to fight, and the Battle of Poltava took place on the 8th of July 1709. 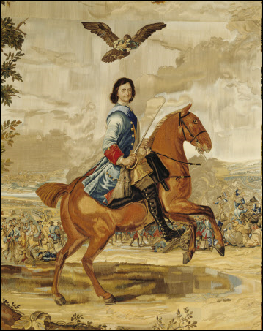 xxxxxWounded in the foot from an earlier encounter, Charles was unable to lead his army in person, but, in truth, this fact is not likely to have altered the ultimate outcome of the battle. The Swedes, 17,000 strong, were heavily outnumbered by a Russian force of some 80,000. In addition, they had lost a great deal of their artillery during their advance, and what pieces they had lacked a sufficient supply of gunpowder. Despite these shortages, Charles went on the attack. Skirting the Russians' forward positions, he launched his depleted army against the enemy's major stronghold. It was a daring plan, but there was some confusion among his commanders as to the ground movements and - more to the point - it simply lacked the necessary force of arms required to take on the highly trained Russian troops. As a result, the Swedish attack faltered and all was lost. A Russian counterattack of some 40,000 men virtually annihilated the Swedish army. Those Swedes who escaped with their lives surrendered at Perevolochna three days later. Some were sent to work in the mines in the Ural Mountains, whilst others were employed on the building of the new city of St. Petersburg, founded, ironically enough, on captured Swedish territory. The illustration, a tapestry, celebrates the triumph of Peter the Great.

xxxxxFor European history, the results of the Battle of Poltava were profound. For Sweden it was a humiliating defeat, and marked the end of that country's bid for big-power status. Charles and about a thousand of his men managed to escape to Moldavia, part of the Turkish Empire, but the Turks only gave him limited support, and by the time he eventually got back to Sweden in 1714 his possessions along the Baltic coast had been seized by his neighbours, and Russia was threatening Stockholm. In 1718 he took a large army into Norway in an attempt to restore his authority, but he was killed at the siege of Fredrikshald later that year.

xxxxxFor Russia, the Battle of Poltava proved to be one of the greatest and most significant military victories in Russian history. By it, Peter 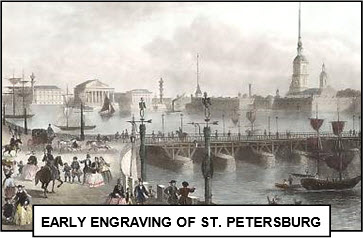 the Great gained control of the Baltic Sea, the provinces along its eastern shore, and a number of islands - including Kotlin Island where the imposing fortress of Kronshtadt was built (illustrated above). Furthermore, the building of St. Petersburg, begun in 1703 and replacing Moscow as the Russian capital in 1713, provided that "window on the west" which Peter had been so anxious to achieve since coming to power in 1689.

xxxxxAs we shall see, by the Treaty of Nystadt in 1721 (G1), twelve years later, Sweden formally conceded its place as a major power, and was never to rise to such heights again. Russia, on the other hand, gained control of the Baltic, and began its long, troubled history amid the turbulent politics of Europe.

xxxxxIncidentally, among his historical dramas, the outstanding 19th century Russian poet Aleksandre Pushkin produced a work on the Battle of Poltava in 1829, and a drama based on the legendary Peter the Great entitled The Bronze Horseman in 1837.