xxxxxIt was in 1756 that the ruler of Bengal, Siraj-ud-Dawlah, captured Calcutta from the British and became responsible, according to some, for the incident known as the Black Hole of Calcutta. On returning to India in 1757, Clive recaptured the city, and then defeated a huge Bengali army at the Battle of Plassey, thanks in large part to the defection of five native commanders, led by Mir Ja'far. The ruler of Bengal was captured and executed, and Mir Ja'far was appointed in his place. This victory gave the East India Company control over the whole of the Ganges valley, and was the first major step towards British rule over the entire sub-continent.

xxxxxThen, in pursuit of Siraj-ud-Dawlah, Clive advanced to the village of Plassey about 95 miles north of Calcutta. Here he faced a huge Bengali army made up of 50,000 men and some 50 guns. A frontal attack upon the small British force of 3,000 would almost certainly have won the day, but before the battle commenced the Nawab's chief general, Mir Ja'far, along with four other military commanders, defected to the British side, bribed by money or the promise of high office. Thus when the opening bombardment was over, and Clive's troops attacked, three-quarters of the Indian force took no part in the battle. The remainder, confused and disorganised were driven from the field, together with their supporting French troops. British casualties numbered just over 70. Siraj-ud-Dawlah managed to escape, but he was captured at Murshidabad and executed. Then, as part of the "deal", Mir Ja'far was appointed in his place. The painting on the right might well show the moment after the battle when his appointment was confirmed. 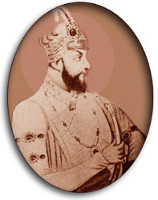 xxxxxIncidentally, in Bangladesh today, a state occupying most of the old province of Bengal, the name Mir Ja'far has become synonymous with treachery, and the anniversary of the Battle of Plassey (the 23rd of June) is always remembered. Had it not been for his defection, and that of the other conspirators, history might well have been different, if only in the short term. Plassey, it has been said, was a confidence trick rather than a battle! ……

xxxxx…… However, commenting on the battle in his Life and Works of 1897, the English historian Thomas Babington Macaulay makes no reference to the defection of Mir Ja’far and the other four commanders. He wrote:

“With the loss of 22 soldiers killed and 50 wounded, Clive had

scattered an army of nearly sixty thousand men, and subdued

an empire larger and more populous than Great Britain.” 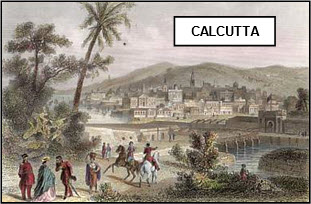 xxxxxIt was in June 1756 that the Nawab (ruler) of Bengal, Siraj-ud-Dawlah, alarmed at the growing strength of the British garrison in Calcutta, sent his troops into the city. The governor and most of the troops in Fort William managed to escape and reach safety aboard British ships lying in the harbour. Those who did not, however, fell victims to the infamous incident known as the "Black Hole of Calcutta" on the night of the 20th June. Robert Clive returned to India the following year to take up his post as governor of Fort St. David, near Madras, and he was at once assigned the task of regaining this important trading city. With a force of some 1,000 men, mostly Europeans, he marched on Calcutta, and recaptured it in January 1757.