xxxxxAs we have seen, during her reign Elizabeth I had had to deal with three major rebellions in Ireland. Her army had met with defeat at the battle of Yellow Ford in 1598, and then her favourite, the Earl of Essex, had failed miserably to curb the revolt of Hugh O’Neill, the Earl of Tyrone. It was not until six days into the reign of James I, in fact, that O’Neill was forced to surrender, and Ireland was reduced to obedience. Under the Tudors the seizure of land had been piecemeal. Under James I it became organised. In 1610 he began the “Ulster Plantation”, settling Protestants in areas in the North which had been devastated by long years of war. And to this settlement in six of the nine counties of Ulster was added a large number of Scottish immigrants. Meanwhile, alongside this land policy went a rigorous political regime meant to keep the Irish subdued, but it did not last. As we shall see, the inevitable rebellion broke out in 1641 (C1) and this contributed - incidentally - to the English Civil War, a conflict which was to lead to the execution of “their” king and the arrival on the Irish scene of Oliver Cromwell, the “curse of Ireland”.

xxxxxAs we have seen, Elizabeth I had been plagued with troubles in Ireland. There were three major rebellions during her reign, and in 1598 at the battle of Yellow Ford her army had suffered a serious defeat at the hands of the Catholics, led by their champion Hugh O'Neill, Earl of Tyrone. This resulted in the despatch to Ireland of the Queen's favourite, the Earl of Essex, but his expedition proved a dismal failure. He made an unfavourable truce with O'Neill, and, deserting his post, returned home in disgrace. His replacement, Lord Mountjoy, fared much better. He defeated the Catholics, together with a Spanish force which had come to their support, and O'Neil gave himself up in March 1603, six days into the reign of the new monarch, James I.

xxxxxO'Neil was pardoned, but stripped of much of his power, and, with his flight to Rome in 1607, together with Earl of Tyrconnell and their families and retainers (the so-called "Flight of the Earls"), Ireland was virtually reduced to obedience for the next thirty years. It was the first period of effective English rule since Henry II's invasion of 1170. The Ulster estates of the two earls, and those of their families, were swiftly taken over, and the land-grab by English and Scottish settlers began in earnest and quickly gathered pace. 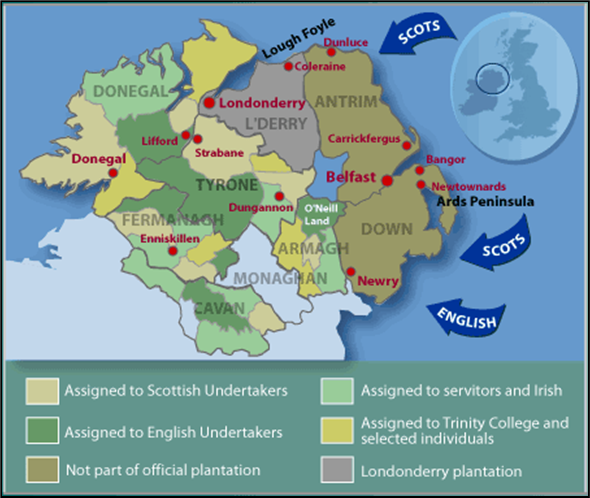 xxxxxUnder the Tudors the seizure of Irish land had been piecemeal, a by-product of conquest. Now, under the Stuarts, it was to become an organised programme. In 1610 James I, being fully determined to "plant" English and Scottish Protestants as settlers in Ireland, began the Ulster Plantation, taking as his pretext the outbreak of war between the traditional rivals, the earls of Tyrone and Tyrconnel. Ratified by Parliament, this openly sanctioned the confiscation of vast tracts of Irish land in the north, much of it laid desolate by years of cruel and bitter conflict. James wanted a loyal population in Ulster in order to guard and garrison a troublesome province. In the words of Lord Salisbury, it was to be a Protestant colony providing “a spearhead in the Irish flesh”. In addition the city of Derry - a notorious trouble spot - was renamed Londonderry, and became governed by the merchant trading companies of the City of London. The newcomers saw themselves as coming to Ireland to be anti-Irish, and they acted accordingly. Many were “Undertakers”, wealthy landowners who, promised at least 3,000 acres, undertook to settle a minimum of twenty English-speaking Protestant families on their new estates. In addition, veterans of the wars in Ireland, known as “Servitors”, were given land grants and some financial assistance.

xxxxxAnd to this "colonial" settlement in six of the nine counties of Ulster was added a larger, unsponsored migration of Scots, settling for the most part in the coastal regions of two of these counties, Down and Antrim. There had always been a movement between Scotland and Northern Ireland, but now it became largely one way. Thus was sown the seeds of future conflict. It is estimated that the percentage of land owned by Roman Catholics in 1641 was 59%, and that dwindled to 22% by 1688 and 14% by the year 1703. 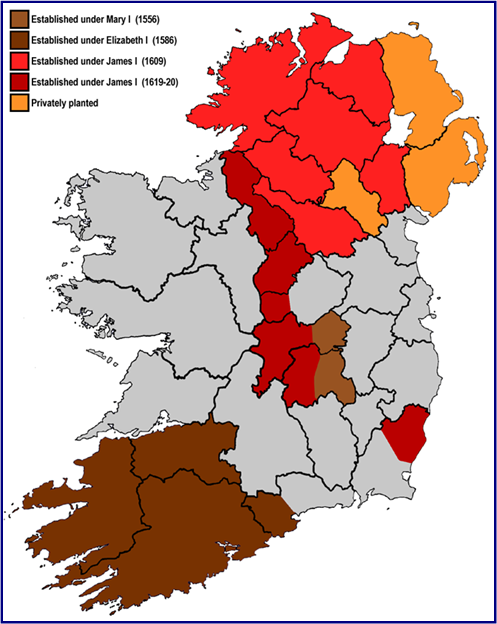 xxxxxAlongside this land policy went a rigorous political take-over. English law was enforced throughout the land, and the Irish Parliament was replaced by the creation of forty boroughs, so constructed as to ensure a permanent majority in favour of the English crown. The Irish were forbidden to play their own music or speak in Gaelic, their native tongue. In matters of religion, the Protestant Church of England assumed control over the Celtic church as well as the Pale - that area in and around Dublin - though such a settlement was hardly likely to stick. The unequal division remained, with the entire Celtic population, and even the majority of those living in the Pale, remaining staunch Roman Catholic, a situation which provided a simmering recipe for revolt. In the last years of his reign, James did concede toleration to Roman Catholics but it came too late. As we shall see, the inevitable rebellion came in 1641 (C1), and though it eventually failed in its aim, it nonetheless set in motion a trail of events which led to the English Civil War, the execution of "their" king, and the arrival on the scene of Oliver Cromwell, the "curse of Ireland".