xxxxxA member of a distinguished family, William Pitt entered parliament in 1735, and soon made his name as a brilliant orator. He played a prominent part in forcing Robert Walpole to retire in 1742, and later took the secretary of state, John Carteret, to task for his policy in the War of the Austrian Succession, accusing him of subordinating the nation’s interests to those of Hanover (the king’s principality on the continent). This lost him royal support, and in 1755 he was dismissed as paymaster general of the forces. However, soon after the outbreak of the Seven Years’ War in 1756, he was recalled to form a coalition government, and it was then that his dynamic leadership and strategic skill brought a string of victories. By using the navy to support and supply Britain’s colonial forces, he drove the French out of Canada and India, and gained outposts in the West Indies and West Africa. His second ministry (1766-1768) was not a success, mainly due to his ill-health, but as the Earl of Chatham in the House of Lords he strove to achieve a peaceful settlement with the American colonies, though he was opposed to their outright independence. He was often referred to as the Great Commoner because of the honesty and integrity he showed whilst in office, and his reputation as a brilliant member of the Commons. 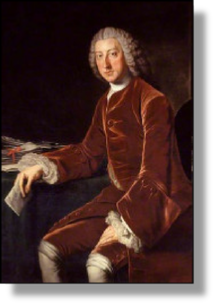 xxxxxThe British Whig politician William Pitt was born in London of a wealthy and influential family, and was educated at Eton and the Universities of Oxford and Utrecht (in the Netherlands). Uncertain as to the career he should follow, he then spent some time on the Grand Tour of Europe - confined, in fact, to France and Switzerland - before entering parliament in 1735 via the “pocket” borough of Old Sarum in Wiltshire. Here, by his commanding presence and powerful oratory, he was soon a leading member of the “boy patriots”, a group strongly opposed to the chief minister Robert Walpole. He thus played a prominent part in forcing a reluctant Walpole to go to war with Spain in 1739 - the so called War of Jenkin’s Ear -, and then in pushing him out of office three years later.

xxxxxHe next turned his parliamentary skills against John Carteret, the secretary of state in the next administration. Speaking, as he put it, for the “voice of England”, he took him to task for his handling of Britain’s contribution in the War of the Austrian Succession, calling him a “Hanover troop minister”. The interests of the nation, he declared, were being subordinated to those of the king’s principality on the continent. Britain’s policy should be to oppose French power where it mattered, at sea and in her colonial possessions. It was a waste of money and men to attempt to defend Hanover. It is hardly surprising that such convictions should lose him royal favour, and that George II should refuse to have him included in the ministry of 1744! But this said, the following year he proved a staunch and effective defender of the Hanovarian dynasty during the abortive Jacobite Rebellion of 1745. Early in 1746 the king agreed to make Pitt joint vice treasurer of Ireland, and two months later he was appointed paymaster general of the forces.

xxxxxHe married successfully in November 1754, but in the next year was dismissed from his job as paymaster general of the forces, following criticism of yet another prominent figure, this time the prime minister, the Duke of Newcastle. But he was not dispatched to the back benches for long. Despite the king’s objections, he was recalled to high office by popular demand soon after the outbreak of the Seven Year’s War. He formed a highly successful coalition government and, as prime minis 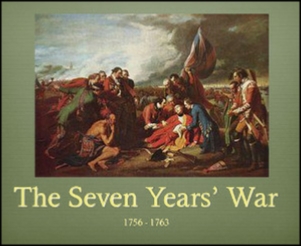 ter in all but name, took over the conduct of the war. In the opening phases of the conflict, matters had gone badly for Britain, with heavy loses and a lack of central direction. Pitt was to change all that. On returning to office he declared, with characteristic modesty, “I am sure I can save this country, and nobody else can”. He more than saved the country and, to do him justice, no other politician of the time could have achieved so much.

xxxxxFrom the start, Pitt, a dynamic leader and brilliant strategist, viewed the war as a global conflict, and one in which sea power was to play a vital and decisive role. He speedily reorganized and re-equipped the navy in order that it might support and supply colonial forces, especially those opposing the French in North America and in India. At the same time, he subsidized the armies of his one major ally, Frederick the Great of Prussia, so that he had the where-with-all (but only just!) to keep France and her allies in check. In 1759 he was amply rewarded with a “year of victories”. In North America the French were soundly defeated and expelled from Canada - never in doubt after the Battle of Quebec - , whilst in India the British East India Company, ably assisted by their clerk-turned-military-commander Robert Clive, virtually drove the French from the sub-continent. By the end of the war, too, Britain had acquired colonial outposts in many other parts of the globe, including the West Indies, West Africa, and the Mediterranean.

xxxxxPitt did not see the war out to the bitter end, though by the time of his departure his major aim - to make Britain an imperial power - had been amply achieved. He resigned in October 1761 following a dispute with the new monarch, George III, who was anxious to end the conflict and thus opposed Pitt’s idea of declaring war upon Spain. He returned to form an all-party government in 1766, but his second ministry was not successful, due in large part to a period of mental ill-health. He resigned in 1768, but as the 1st Earl of Chatham continued to sit in the House of Lords. Here he strongly advocated a peaceful settlement with the American colonists, but he was never in favour of their gaining total independence. It was in the House of Lords in 1778, when he was about to make a speech against American independence on any terms, that he suffered a severe stroke. (See below The Death of the Earl of Chatham by the American artist John Singleton Copley.) He died a few weeks later at his home in Hayes, Kent.

xxxxxDespite his distinguished background, and the high-handed manner he sometimes showed as a war-leader, Pitt was known for most of his career as the “Great Commoner” on account of his honesty and integrity - rare qualities in a politician of that day. When he was appointed paymaster of the forces, for example, he refused to take any more than his official salary, insisting on putting the substantial “perk

s” that went with the job back into the Bank of England, the nation’s purse. Indeed, so highly respected was he in this regard that when, on resigning, he accepted a peerage and an annuity for his wife, there was a great public outcry. Nevertheless, when he died in May 1778, the whole nation mourned, and he was buried in Westminster Abbey with all the theatrical pomp he deserved and, indeed, would have desired. Among his non-political friends were the novelist Henry Fielding and the actor David Garrick (illustrated) - from whom he might well have learned some useful dramatic poses for his parliamentary performances!

xxxxxIncidentally, the great American city of Pittsburgh, Pennsylvania, is named after Pitt the Elder, (having been built on the site of Fort Pitt, constructed in 1761), as is the city of Pittsfield in Massachusetts.

finest portrait artists, John Singleton Copley (1738-1815), painted his famous Death of the Earl of Chatham in 1778. This is set in the House of Lords, where Chatham collapsed while making a speech against American independence. (A detail from this painting is shown here). In England, Copley gained a reputation not only for his portraits, but also for his painting of historical events of his day.

xxxxxCopley was born in Boston, Massachusetts, and began painting around 1753. He was virtually self-taught, but from an early age he showed a remarkable ability at making anatomical drawings. He soon gained a reputation for his portrait painting of prominent figures in colonial New England. Notable amongst these were his portraits of the revolutionary politician Samuel Adams, and the patriot Paul Revere, famous for his part in the opening battles of the American War of Independence. Copley’s formal, elegant portraits of high society’s men and women meant that he was never short of work, but in 1766, anxious to advance his career, he sent his painting Boy with a Squirrel to the Society of Artists in London. This was exhibited by the Society, and attracted a complimentary letter from none other than the English artist Sir Joshua Reynolds, first president of the Royal Academy. Spurred on by this success, and encouraged by his fellow countryman and artist Benjamin West - then living in England -, he settled in London in 1774. His wife and family joined him the following year and, save for a short European tour, this was his home for the rest of his life.

xxxxxIt was from this time onwards that he began to specialize in recording historical scenes. In 1783 he gained admission to the Royal Academy of Arts for his famous picture of Chatham. Other historical works included his Death of Major Francis Pierson, depicting a battle scene during an unsuccessful French invasion of the island of Jersey in 1781, and the Siege of Gibraltar of 1782. A number of his works, such as his Watson and the Shark - a popular painting (illustrated below) - had as their theme man’s struggle against nature, and among his many portraits of this period was one of the American diplomat John Quincy Adams, and one of King George III’s three youngest daughters.

xxxxxThe American portrait painter John Singleton Copley (1738-1815) is probably best known today for his The Death of the Earl of Chatham, the scene depicting the fatal collapse of the English statesman in the House of Lords in 1778. Born in Boston, Massachusetts, and virtually self-taught as an artist, Copley made his name painting portraits of prominent figures in colonial New England. These included the politician Samuel Adams and the patriot Paul Revere, as well as many elegant portraits of high society’s men and women. In order to advance his career, he settled in London in 1774, and remained in England for the rest of his life. There he also began recording historical scenes. Apart from the Death of Chatham, these included The Death of Major Francis Pierson at the Battle of Jersey in 1781, and the Siege of Gibraltar in 1782. Among his portraits of this time was one of the American diplomat John Quincy Adams. Regarded today as the finest portraitist of colonial America, he is mainly remembered - apart perhaps for his Death of Chatham - for the outstanding quality of the portraits he produced during his early days in New England.

xxxxxRegarded today as the finest portrait painter of colonial America, demand for his work declined during the Napoleonic Wars. He then fell into debt and suffered from depression. Today, apart perhaps from his historical work The Death of the Earl of Chatham, his fame rests mainly upon the many fine paintings produced during his early days as a portrait artist in New England, and during a short stay he made in New York in 1771.