xxxxxThe Babylonian Captivity ended with the return of the pope to Rome in 1377, but, as we have seen, just a year later, in 1378 (R2), the Great Schism occurred, with two popes appointed, one at Rome and the other at Avignon. An attempt to solve this dilemma was made at the Council of Pisa in 1409, but it only served to make matters worse. The Council appointed a new pope, but as the other two would not recognise him, the Church ended up with three popes - bringing the Christian faith into even greater disrepute. As we shall see, it was not until 1417 (H5), at the Council of Constance, that this farcical matter was finally resolved.

xxxxxAs we have seen, no sooner had the pope returned to Rome in 1377 - thus bringing an end to the “Babylonian Captivity” in southern France - than the papacy became tragically split by what came to be known as the Great Schism. In 1378 (R2), following the death of Gregory IX, one pope succeeded him in Rome and another was elected at Avignon. Both claimed to be the rightful Vicar of Christ and both excommunicated the other!

xxxxxThe Council of Pisa, held in 1409, was the first of several general church councils which attempted to deal with this “schism”, a division which was doing a great deal of harm to the prestige and authority of the Catholic Church. It proved not just ineffectual, but positively counter-productive. The council elected Alexander V as pope - he reigned for just ten months - but, as neither of the other two popes would acknowledge the Council's right to make this appointment, a Church divided in two now became a Church divided into three, with popes at Rome, Avignon and Pisa. As we shall see, it was not until eight years later, in 1417 (H5), that the Council of Constance met and managed to resolve this serious crisis of faith.

xxxxxIncidentally, during his brief term in office, Alexander V sent a papal bull to the Archbishop of Prague ordering the burning of Wycliffe's heretical works. The Bohemian religious reformer Jan Hus was preaching and teaching in Prague at this time, and he was known to be sympathetic towards many of the ideas put forward by the English prelate. As a matter of interest, Alexander died in mysterious circumstances in May 1410. It has been suggested that he was poisoned by his successor, John XXIII, but there is no evidence to support this. 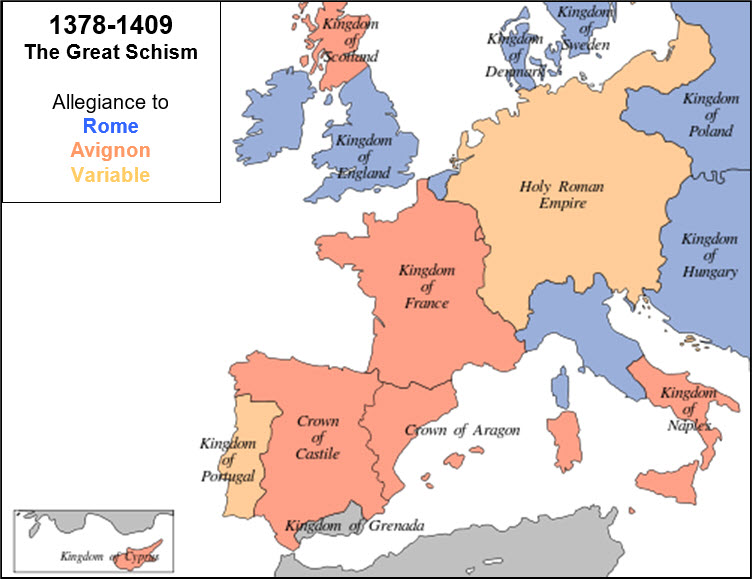