xxxxxThe frescoes and panel paintings of the Italian Piero della Francesca, a mathematician as well as an artist, are noted for their disciplined use of colour and perspective which, combined with a simplicity and clarity of composition, create a feeling of grandeur and serenity. He learnt from the works of Masaccio and Fra Angelico, but also developed an individual style. This is best seen in his series of frescoes for the church of San Francesco in Arezzo, begun in 1452. Tracing the history of the wood upon which Christ was crucified, these scenes, noted above all for their solemnity and the limpid beauty of their colours, are now numbered among the treasures of the Italian Renaissance. Most of his work is on religious subjects, such as The Madonna of the Misericordia ,The Flagellation of Christ, and The Nativity, but he is also well known for his profile portraits of the Duke and Duchess of Urbino. He influenced the style of Giovanni Bellini, but his purity of form and his mastery of colour, light and perspective were not fully appreciated until the 20th century. 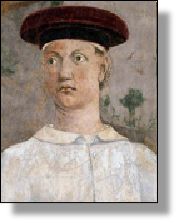 was born in the small town of Borgo san Sepolcro, about 40 miles south-east of Florence (now called Sansepolcro). He was brought up by his mother and, apart from visits to the papal court at Rome, and the artistic centres of Florence, Ferrara, Rimini, Arezzo and Urbino, spent most of his time in the town of his birth. Little is known of his life there, but documents record that he served as a town councillor in 1442 and 1467.

aaaaaHis movements are somewhat sketchy. He worked in Florence in the late 1430s, painting frescoes in the church of Sant’Egidio (since destroyed), and studying all the forms of early Renaissance art. He was particularly influenced by the work of Masaccio and Fra Angelico, and it was here that he became acquainted with Alberti’s theories on perspective, contained in his Della Pittura (On Painting) of 1436. It was on his return to Borgo that, amongst a number of panel paintings and frescoes, he produced his earliest known work The Madonna of the Misericordia, an altarpiece begun in 1445. This is thought to contain a self-portrait of the artist. He next visited Ferrara. There is no record of the painting he did there, but he would certainly have seen works by the Flemish artist Rogier van Weyden, and been introduced to the use of oils. Then in 1451 he went to Rimini where he assisted in the redecoration of the Church of San Francesco. His contribution was a fresco showing the ruler, Sigismondo Malatesta, kneeling before his patron saint, Sigismund. Over the next thirty years Piero also made numerous visits to the court of Urbino. His most famous works there were his Flagellation of Christ and his portraits in profile of the enlightened Renaissance ruler Federigo da Montefetro and his wife Battista Sforza (illustrated below). 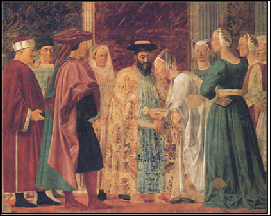 he began work on his largest commission, the Arezzo frescoes. Today regarded as his masterpiece, they decorate the choir in the church of San Francesco. In keeping with the mania for religious relics at this time, they tell the Story of the True Cross. Based on a collection of medieval legends, they trace the history of the wood on which Christ was crucified. When completed some twelve years later it contained some of the most beautiful scenes in Christian art, including The Meeting of Solomon and the Queen of Sheba (detail illustrated here), the Exaltation of the Cross, the Battle between Heraclius and Chosroes, and the Discovery and Proof of the True Cross (the last two illustrated below). Despite the damage these frescoes have suffered over the years, they still inspire by the freshness of their soft, muted tones and - apart from the battle scene - the feeling of serenity and timelessness they create.

aaaaaPiero spent the last twenty years of his life in his home town, where he passed some of his time studying mathematics and philosophy. To this period, however, belongs, one of his greatest frescoes, The Resurrection (now in the Palazzo, the town’s museum and art gallery), and one of his last surviving works, his unfinished Nativity, begun around 1470 and now in the National Gallery in London. It would appear that his sight began to fail when he was about 60 (1475) and that he was blind in the last two or three years of his life. He was buried in the family grave in the Abbey of Sansepolcro. 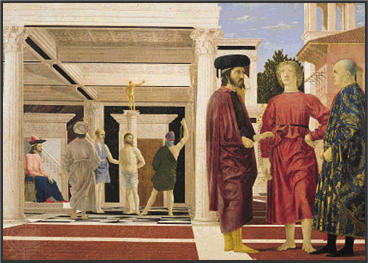 aaaaaPiero’s style is highly individualistic. As would be expected of these times, nearly all his works have a religious theme and are painted in fresco or on wooden panels, but, fascinated as he was by mathematical order, they possess distinctive qualities based on precision and clarity. In his masterly use of colour and light, for example, he combines a harmony of muted, limpid tones with a feeling of cool, airy space, best seen in his The Nativity and a number of his Arezzo frescoes. And by his close study of perspective he creates a realistic sense of depth, especially notable in his detailed architectural study of the receding floor and ceiling in The Flagellation of Christ (here illustrated), and the marble apse which is situated above and, seemingly, behind The Madonna and Child with Saints and Angels. In his Resurrection he employs perspective and foreshortening to heighten the emotion of the scene and its symbolic meaning. Towards the end of his life he wrote three books on the subject of perspective, the best entitled On Perspective in Painting. And such was his knowledge that while in Urbino he gave lessons to Donato Bramante, the Italian architect who made the first designs for the new Basilica of St. Peter in Rome. 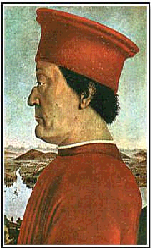 the composition of his figures - dignified, impassive and with a classical severity reminiscent of ancient Greek statutory and the stiff style associated with Byzantine art. Yet though his figures are “wooden”, and their faces virtually devoid of expression, they nonetheless succeed in conveying the serenity and confidence of religious conviction. And even his battle scene, part of his Arezzo series, though devoid of any movement, appears as a gory conflict frozen in time. Nor was he without skill as a portrait artist, as his portrayal of the Duke and Duchess of Urbino clearly shows here.

aaaaaBecause he spent most of his days in the small town of Borgo san Sepolcro, his frescoes and panel paintings were little known during his lifetime. His work did influence some, including the Venetian artist Giovanni Bellini, but tended to be forgotten not long after his death. In any case, his paintings were too self-contained to find a place in the mainstream of Florentine art at that time. It was not until the 20th century, in fact, that his works were re-appraised, and he became recognised as one of the major artists of his time.

aaaaaIncidentally, The Flagellation of Christ (illustrated above) is one of the most beautiful and, at the same time, most puzzling paintings in the history of art. It is made up of two separate scenes. The foreground to the right of the painting is dominated by a group of three men, whilst the flagellation itself, pictured on the left, is relegated to the background. Over the years many theories have been put forward to explain or identify these three mysterious figures, but none has come up with a definitive connection between these two scenes. ……

aaaaa…… In 1459 he was invited to Rome by pope Pius II to decorate his bedroom in the Vatican. Unfortunately, his frescoes deteriorated quite rapidly and early in the 16th century the Italian master painter Raphael was commissioned by Pope Julius II to paint over them. ……

aaaaa…… Two of his best known works were his pair of portraits in profile of the Duke and Duchess of Urbino, produced around 1465 (illustrated above). Profile portraits were in vogue at this time, but in the case of the Duke, Federigo da Montefeltro, this view was chosen for a personal reason. Some years earlier he had lost his right eye and badly damaged his nose while taking part in a tournament.

aaaaaAnother Italian artist who, like Piero, made a close study of perspective and foreshortening was Antonio Pisano, known as Pisanello, (c1395-c1455). His skill in this direction can be seen in the large number of beautiful drawings he produced, now preserved in the Vallardi Codex in the Louvre, Paris. This unique collection of extremely detailed drawings, some coloured, were drawn from life and cover a wide range of subjects, including plants, animals and three-dimensional exercises (examples illustrated below). 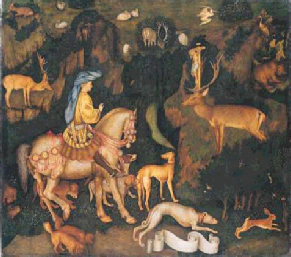 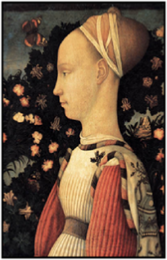 much influenced by the gothic style of his mentor Gentile da Fabriano, with whom he worked on frescoes in the Doges’ Palace, Venice, and in St. John Lateran in Rome. But of the frescoes he executed only two remain in Verona: his Annunciation and his Saint George and the Princess, a work particularly noted for its close observation, its rich, tapestry-like quality, and its medieval chivalry. Best known among his paintings is his rich and fanciful The Vision of St. Eustace a wooded scene crowded out with brightly coloured birds and animals, each meticulously represented, and his small portrait of Princess of the House of Este, an elegant study of clear colours produced around 1443 (both illustrated here). 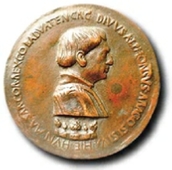 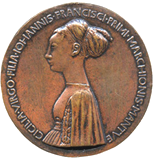 rested more upon his portrait medals than upon his drawing or painting. Indeed, he it was who, after studying Greek and Roman headed-coins, invented the modern commemorative medal - and, as from 1439 made a good living as a result. These miniature portraits in relief - some to commemorate weddings or special occasions, and with pictorial scenes on the reverse side - proved extremely popular among his aristocratic patrons, and he found a ready market in all the major Italian courts, including those of Mantua, Milan, Pavia, Rimini, Ferrara and Naples. It is not surprising, perhaps, that his medals are still regarded as the finest ever produced. The Victoria and Albert Museum in London boasts a sizeable collection of them.

aaaaaIncidentally, after the Second World War a fresco by Pisanello depicting horsemen and soldiers was discovered in one of the rooms in the Ducal Palace at Mantua.

xxxxxAnother Italian artist who, like Piero, experimented with perspective, was Antonio Pisano, known as Pisanello (c1395-c1455). His large collection of beautiful drawings, now held in the Louvre, Paris, contains three-dimensional exercises, as well as detailed drawings of plants, birds and animals. His painting, greatly influenced by the gothic style of his mentor Gentile da Fabriano, included his fresco Saint George and the Princess, and his The Vision of St. Eustace, now in the National Gallery, London. These and his other works, rich in detail and colour, have a tapestry-like quality. But in his own time, his fame rested on his portrait medals, an art form he himself introduced in 1439 after studying Greek coinage. These miniature portraits in relief proved extremely popular in courts as far afield as Mantua, Milan, Pavia, Rimini, Ferrara and Naples. Some of these medals can be seen in the Victoria and Albert Museum, London.