xxxxxThe Swiss explorer Johann Ludwig Burckhardt has the distinction of being the man who rediscovered the ancient City of Petra in today’s Jordan, and the great temples of Abu Simbel in modern Egypt. To cap it, he was also the first Christian who, disguised as a Muslim pilgrim, visited the holy city of Mecca. In 1809, having been sponsored by the English African Association to explore the Fezzan region of the Sahara Desert, he went to Syria to learn Arabic, and then travelled to Cairo in 1812. It was in that year that he visited Petra and the temples at Abu Simbel. He returned to Cairo to make his way across Africa, but was taken ill and died at the age of 32. 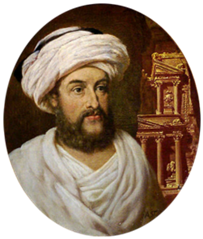 xxxxxIt was in 1812 that the Swiss explorer Johann Ludwig Burckhardt discovered the ancient City of Petra in Jordan, some 50 miles south of the Dead Sea. He went on to visit the great temples of Abu Simbel in southern Egypt and, then crossing into Arabia disguised as a Muslim pilgrim, became the first Christian to visit the holy city of Mecca.

xxxxxBurckhardt was born in Lausanne, and in 1806 visited England to study in London and at Cambridge University. Three years later, sponsored by the English African Association, he travelled to Syria. Here he learnt Arabic and the Muslim way of life in preparation for an expedition to the Fezzan region of the Sahara (now part of south-west Libya) to search for the source of the Niger. Having completed his studies in 1812, he made his way to Cairo, and it was while en route to that city that he chanced upon the important archaeological site of Petra in modern Jordan. 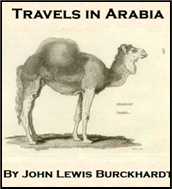 xxxxxOn his arrival in Cairo he could find no caravan travelling to the Fezzan region and decided to journey up the Nile. It was then that he reached the huge temples of Abu Simbel. After this, he crossed into Arabia and, disguised as a Muslim pilgrim, became the first Christian to visit the Muslim’s holy city of Mecca. On returning to Cairo in 1815, he again tried to find a means of travelling to Fezzan. He eventually found a suitable caravan, but just prior to his departure he was suddenly taken ill and died at the age of 32.

xxxxxDuring his travels Burckhardt gave himself a Muslim name - Sheikh Ibrahim Ibn Abdallah - and for much of the time he wore Muslim clothing. From time to time he sent his journals and notes back to England, together with all his correspondence. These formed the material for three books -Travels in Nubia, Travels in Syria and the Holy Land, and Travels in Arabia, published after his death by the English African Association. He left his large collection of Arabic manuscripts to the library at Cambridge University. 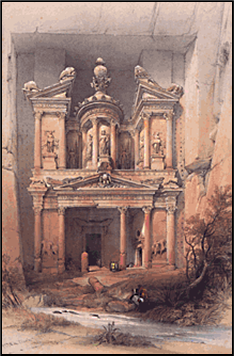 xxxxxThe ancient City of Petra is situated in a mountain basin in what is now south-west Jordan, east of the village of Wadi Musa. It was at one time an Edomite stronghold and, in the second century, the capital of a people known as the Nabataeans. Apart from its value as a mountain fortress, it was a major commercial centre on the great caravan routes which cross-crossed Arabia at that time. In 106 AD it was captured by the Roman Emperor Trajan, but continued to flourish within the empire until a change in trade routes brought a serious decline in its importance and revenue - a decline hastened by the effects of a serious earthquake in 551 AD. It was captured by the Muslims in the 7th century, and appears to have been occupied by the Crusaders in the 12th century. After they left, the city fell into disuse. 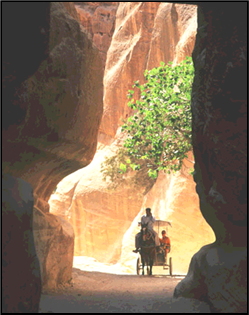 xxxxxOnce rediscovered by Burckhardt in 1812, Petra amazed all visitors by its value as a fortress, and the natural beauty of its vast monuments, amply testifying to its former wealth, power and prestige as a commercial and cultural centre. Surrounded by a wall of high cliffs, the city can only be entered via a long, narrow ravine, barely 12ft wide in places and known as the Siq (illustrated on left). The buildings themselves are carved out of the red rock face, the notable structures being the “Treasury”, facing the narrow entrance (illustrated above), “The Monastery”, and the huge semicircular theatre, big enough for 3,000 spectators. Along the rock face are rows of tombs, hewn out of the solid rock, many of them elaborately adorned.

xxxxxIncidentally, the name Petra comes from the Greek word meaning “rock”. In biblical times the city was known as Sela. Today it is an important tourist attraction and, because of the sandstone from which it is made, it is often referred to as the “red-rose city”.

xxxxxThe ancient, mountain City of Petra was rediscovered by the Swiss explorer Burckhardt in 1812. Once an Edomite stronghold and capital of the Nabataeans, it was conquered by the Romans in 106 AD. Later, losing its commercial importance, it was seized by the Muslims in the 7th century and, for a time, was occupied by the Crusaders in the 12th. With their departure the city fell into disuse. Approached only by a narrow ravine, the city’s impressive buildings are hewn out of the rock face, the notable structures being the Treasury Building, The Monastery, and a huge semicircular theatre. Now a major tourist attraction, Petra is often called the “rose-red city” because of the sandstone from which it is made.

xxxxxAbu Simbel, rediscovered by the Swiss explorer Burckhardt in 1812, is the site of two ancient temples, carved out of rock along the west bank of the Nile, 175 miles south of Aswan in Egypt. They were built by Ramses II as a memorial to himself and his queen Nefertari. The larger temple is guarded by four gigantic figures of the king, and another four, smaller in height, are stationed at the entrance to the smaller temple, dedicated to the Queen. Relief paintings decorate the interior walls, and both temples have inner sanctuaries containing statues of the dynasty’s chief gods. The paintings and inscriptions proved of historical value. In the 1960s, prior to the building of the Aswan Dam, the two temples were removed to higher ground. 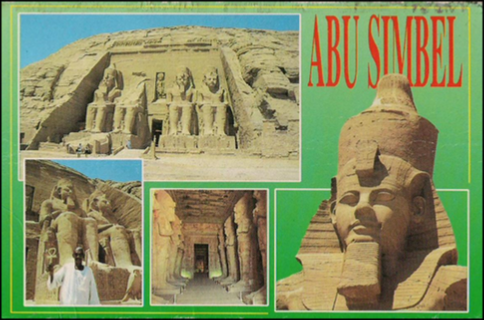 xxxxxAbu Simbel was rediscovered by the Swiss explorer Burckhardt in 1812. Situated some 175 miles south of Aswan in southern Egypt, it is the site of two ancient temples which were cut into the sandstone rockface which runs alongside the west bank of the Nile in that area. The great pharaoh Ramses II (1304-1237 BC) had them built to serve as lasting and very large memorials to both him and his wife Nefertari. And large they certainly are. Four colossal sitting statues of Ramses, rising to 65ft, guard the entrance to the larger temple, and four others, about half the height, together with two statues of Nefertari and their children, adorn the façade of the smaller temple. The Great Temple and its interior are shown here.

xxxxxInside, the walls are decorated with relief paintings of the king - fighting or taking part in religious ceremonies - and a series of halls and chambers lead to an inner sanctuary. Here there are the statues of three prominent gods and the king himself, positioned so that they receive the direct rays of the sun twice a year. The Queen’s chamber is also decorated with religious scenes, and contains a statue of the goddess Hathor as well as one of Nefertari herself. The inscriptions and relief paintings within the two temples, together with inscriptions on the figures outside, have proved of great historical interest 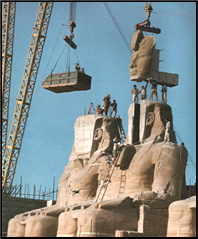 xxxxxIn the 1960s the construction of the Aswan High Dam, and the vast reservoir this scheme created, made it necessary to move the temples to higher ground above the original site. In a remarkable engineering feat, the temples and their statues were cut into sections and reassembled on a site some 200 feet above the river. This international project, completed in 1968, cost around $40 million.