xxxxxPeter the Great became sole ruler in 1689, determined to make Russia a great European power. He ratified the Treaty of Nerchinsk concerning the Russo-Chinese border and then, defeating the Turks,  gained access to the Black Sea for a number of years. In the north, however, his army was soundly defeated by the Swedes at the Battle of Narva in 1700. For 18 months he visited Western Europe, studying its technical production - particularly in artillery and shipbuilding - and recruiting some 900 experts in a variety of skills. With their aid he developed industry and trade within Russia and modernised his army. At home he subdued the nobles, cut down the power of the Church, and completely overhauled the legal system and civil administration. He established the Academy of Sciences and, on the advice of the German philosopher Goffried Leibniz, introduced a formal education system. As we shall see, these improvements paid off. In 1709 (AN) he gained a resounding victory over the Swedes at the Battle of Poltava, whilst his building of St. Petersburg was to give him a vital “window on the west”. 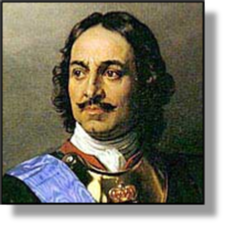 xxxxxPeter the Great (as he came to be known) became Tsar of Russia in 1682 and shared this title with his imbecilic half-brother Ivan V. At this time, the government of the country was in the hands of his ambitious half-sister Sophia, who, with the aid of the Streltsy, her personal bodyguard, had massacred her rivals and declared herself regent. In 1689, however, when she called upon the Streltsy to dispose of Peter himself, many of its leaders deserted her and, amid much public support, rallied to Peter's side. Sophia was despatched to a nunnery, dissident members of the Streltsy were exiled to Siberia, and Peter became virtual ruler of Russia at the tender age of seventeen. Seven years later, following the death of Ivan V, he became the sole leader, but by then he had already embarked upon the daunting task of modernising his vast country.

xxxxxAs the youngest son of Tsar Alexis by a second marriage, his childhood was spent in a village outside Moscow, not in the Kremlin itself. As a consequence, Peter's upbringing had been a comparatively liberal one, and he had mixed freely with European seamen, merchants and visitors. Such contacts convinced him that Russia's future lay in the West. He saw the need to reform his country on European lines, and increase its military and naval standing. It is little wonder that he is now regarded as the founder of the modern Russian state.

xxxxxHaving ratified the Treaty of Nerchinsk concerning the Russo-Chinese border, the early years of his reign were taken up with a series of battles against the Turks in the Crimea. After some initial reverses, in 1696 his forces captured the fortress of Azov, thereby achieving the young Tsar's major objective: access to the Black Sea. Success here was short lived, however. In 1713, following another conflict with the Turks, he was obliged to give up Azov by the terms of the Treaty of Adrianople. Nonetheless, these campaigns mark the beginning of Russia's determination to expand southwards in order to reach the shores of the Black and Caspian Seas.

xxxxxFollowing his initial success against the Turks, in March 1697, Peter turned his attention to Europe. Over the next eighteen months, accompanied by a large party of officials, he visited Prussia, Holland, England and Austria to study at first hand the latest methods of technical production, particularly artillery, fortification and shipbuilding. During his travels he recruited some 900 military experts, engineers and other artisans to assist him in his ambitious reforms. For a time, we are told, he even found employment for himself in the Dutch shipyard at Saardam, and the English naval dockyard at Deptford, working under an assumed name. On his return to Moscow he sent large numbers of young Russians to Europe to learn a variety of western skills and techniques. 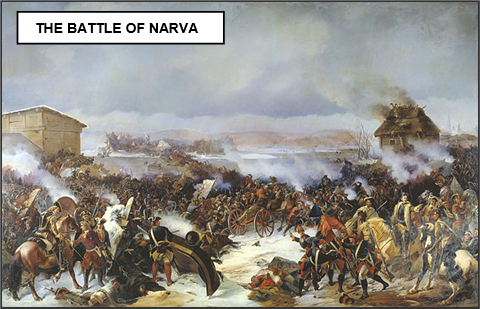 xxxxxIn 1700, with a confidence which proved badly misplaced, he agreed to join a European alliance against the Swedes who, under their king Charles XII, were bent on their own plans of conquest. For Russia, a victory over Sweden held out the possibility of gaining territory along the Baltic coast, thereby opening a "window on the west". But the first phase of the conflict which followed - known as the Great Northern War - dashed any such hopes. The Russian army - no match for the Swedes - was soundly defeated at the Baltic city of Narva in 1700. This defeat only served to strengthen Peter's resolve, but it was to be some years before his army - retrained and re-equipped - was able to wreak revenge and - more to the point - gain strategic access to the comparatively warm waters of the Baltic.

xxxxIn the meantime, his reforms at home continued apace and, by the end of his reign, were to effect every aspect of national life. His nobles - a particular source of danger when left to harbour their own ambitions - were required to attend school and then take up posts in the civil service or the armed forces - the only sure avenues to promotion. In addition, the legal system and civil administration were completely over-hauled, and the Russian Orthodox Church was cut down to size - another power bloc which had a tendency to go it alone. It was brought firmly under government control by the setting up of a Holy Synod owing obedience to the Tsar himself. Furthermore, following the advice of the German philosopher Gottfried Leibniz (illustrated), he introduced a formal education system and, later in his rule, established an Academy of Sciences. At the same time he encouraged Western dress, simplified the Russian alphabet, and modernised the calendar from the year 1700. And alongside these advances went a rapid development of industry - particularly in the manufacture of iron - and a marked increase in international trade, especially after the Baltic had virtually become a Russian lake. 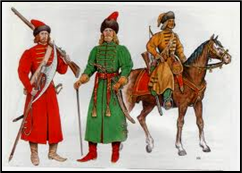 xxxxxTo ensure vital military support for this dictatorship, Peter strengthened the aristocratic Guards Regiments, and developed them into privileged units loyal to the state. That such a force was required was clearly demonstrated in 1698 when the Streltsy (illustrated) once more entered politics and attempted to reinstate his half-sister Sophia. Peter showed no mercy. The rebellion was ruthlessly crushed in June of that year. In the October, hundreds of the rebels were most cruelly tortured before being put to death - the number is put as high as 2,000 -, and the corps itself was disbanded. As for Sophia, she denied all knowledge of the plot, and was put under house arrest for the remainder of her life.

xxxxxThe treatment meted out to the Streltsy bears testimony to Peter's capacity for cruelty. Together with his small band of drinking buddies (known collectively as "the Most Drunken Order of Fools and Jesters"), he took part and pleasure in the torture and the killing of the rebels. Later he was to be present at the torture of his own son. He was a big man - about two metres tall -, and he possessed an abundance of energy. He was coarse in manner, often ill-tempered, and had little time for the trappings of high office, but he was determined to make Russia a great power - a great European power. By 1702 he had already gone some way to achieving his domestic reforms, but his defeat at Narva two years earlier put a stop to his plans in the Baltic.

xxxxxHowever, as we shall see, it proved but a temporary setback. By increasing his military and naval power he gained a resounding victory over the Swedes at the Battle of Poltava in 1709 (AN) and, with the building of St. Petersburg, acquired at last that vital "window on the west". It was on the strength of these achievements that Peter I came to be known as "Peter the Great" and was afforded the title Emperor of all the Russias.

xxxxxIncidentally, we are told that while working at Deptford he lived in an elegant house belonging to the diarist John Evelyn. By all accounts he left it in a disgusting state on his departure! ......

xxxxx...... His simplification of the Russian alphabet - and the introduction of Arabic numerals - wa 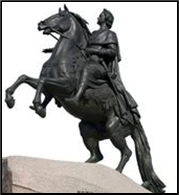 s quite a major operation. In order to encompass new scientific, technical, cultural and political terms, he was obliged to produce a written language which not only combined existing versions within his own language, but also incorporated a large number of Western words and phrases. ......

xxxxx…… A huge bronze equestrian monument to Peter the Great was unveiled in Saint Petersburg in 1782. The work of the French sculptor Étienne Maurice Falconet (1716-91), he was invited to work in Russia by Catherine the Great in 1766.