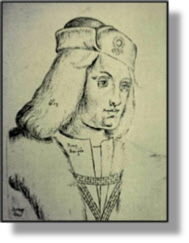 xxxxxThe son of a local Flemish official, Perkin Warbeck had various jobs before ending up at Cork in southern Ireland in 1491. A vain and easily-led young man - and clearly so! - he was here persuaded to act as an impostor and to claim the English throne as the Duke of York, presumed to have been murdered in the Tower of London in 1483, along with his brother Edward V. Once having agreed to this impersonation, he was not without supporters both at home and abroad, all anxious to overthrow the Tudor dynasty before it took root.

xxxxxHe journeyed to the continent where he was coached in his new and unexpected role by Margaret, Duchess of Burgundy (Edward IV's sister). He was then received at the French court as the rightful claimant to the English throne, and also gained the support of Maximilian I of Austria. Indeed, so concerned was Henry at this turn of events that he invaded France in 1492 and, by the Peace of Étaples, forced Charles VIII of France to expel Warbeck and pay a large indemnity into the bargain. But this did not put paid to the threat. Now assured that King James IV of Scotland, plus a large slice of the English nobility would rally to his cause, Warbeck - or rather his supporters - planned an invasion of England.

xxxxxTwo attempts, both made in 1495, were far too feeble and ended in failure, but in 1496 James of Scotland invaded Northumberland in support of Warbeck's cause, and in the following year, 1497, the pretender landed in Cornwall and mustered a force of some 3,000 men. The rebel army attempted to take Exeter, but was met by royalist troops and quickly put to flight. Warbeck made his escape, but was captured at Beaulieu in Hampshire and taken to London. In 1498 he publicly confessed to his treason and was imprisoned in the Tower of London. There he might well have stayed had he not attempted to escape the following year. Seen as a potential danger to the crown, he was then convicted of treason and hanged.

xxxxxIncidentally, the English playwright John Ford (1586-c1637), one of the most outstanding of the early Stuart dramatists, wrote a tragedy about the life of Warbeck in 1634. It is considered by some to be the finest historical drama since the works of Shakespeare. He is best known today, however, for his family drama ‘Tis Pity She’s a Whore, published in 1633.

xxxxxIt was in 1491, while in Ireland, that the young Perkin Warbeck was persuaded by Irish dissidents to lay claim to the English throne as the Duke of York (presumably murdered in the Tower in 1483). He then travelled to the continent where he received the support of France and Austria. So concerned was Henry VII that he invaded France in 1492 and forced the French to expel Warbeck. In 1497, following a Scottish invasion, Warbeck landed in Cornwall and mustered some 3,000 men. But they failed to take Exeter, and Warbeck was eventually captured. He was imprisoned in the Tower of London and, after attempting to escape, was convicted of treason and hanged in 1499.

xxxxxAn earlier attempt to dethrone the Tudors was made in 1487 by a young man called Lambert Simnel (c1475-c1525). Claiming to be Edward, Earl of Warwick, the last Yorkist claimant to the throne (imprisoned at that time in the Tower of London) Simnel was crowned at Dublin as Edward VI. Landing in Lancashire with a force which included 2,000 German mercenaries, he marched south, but was defeated by royalist forces at the Battle of Stoke Field near Stoke-on-Trent (regarded by some as the last battle of the Wars of the Roses). Seen as simply a pawn in a Yorkist plot, he was pardoned and spent the rest of his life working in the royal kitchens. 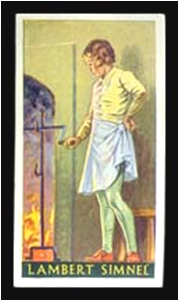 revolt centred around Warbeck was not the only Yorkist uprising faced by Henry in the opening years of his reign. An earlier but less dangerous attempt to overthrow the first Tudor monarch had been based around a young man called Lambert Simnel (c1475-c1535), the son of an Oxford joiner. Having, it would seem, some resemblance to Edward IV, he was passed off as the young Edward, Earl of Warwick, the last Yorkist claimant to the throne. The young earl was actually imprisoned in the Tower of London at the time, and Henry had him paraded around the streets of London to prove the falseness of Simnel's claim, but the uprising still simmered on.

xxxxxIn 1487, having travelled to Ireland (where sympathy for the Yorkist cause was considerable), Simnel was crowned at Dublin as Edward VI. He then landed in Lancashire with a sizeable force - including some 2,000 German mercenaries provided by Margaret, Duchess of Burgundy - and, marching south, attacked the royalist forces at the Battle of Stoke Field near Stoke-on-Trent. He was defeated and captured but, being recognised as just a pawn in a Yorkist plot, he was pardoned and spent the rest of his life working in the royal kitchens.

xxxxxThe Battle of Stoke Field is considered by some historians as the last conflict of the Wars of the Roses, based on the fact that John de la Pole, the Earl of Lincoln - who had a genuine Yorkist claim to the throne - took part in the battle. He was killed in the fighting.