xxxxxThe Quaker William Penn spent some years in prison for his attacks on Protestant doctrine. During this time he wrote his No Cross, No Crown, a work upholding Puritan virtues and the Quakers’ dedication to social reform, and his The Great Cause of Liberty of Conscience, a powerful defence of toleration. He travelled widely as a Quaker minister, both at home and on the continent, and then in 1682, the king having granted him a piece of land in North America, he established the colony of Pennsylvania for Quakers and other persecuted minorities. He made a peace treaty with the local Indians and set up his “holy experiment”, a sound and fair system of government as he saw it, but quarrels soon broke out between different factions. He later made changes to the administration, but internal disputes continued. Meanwhile in England Penn had to fight off a charge of treason in 1688 - being accused of corresponding with the deposed James II - and on his final return was cheated out of his money and ended up in a debtor’s prison. He suffered a severe stroke in 1712 and died six years later. 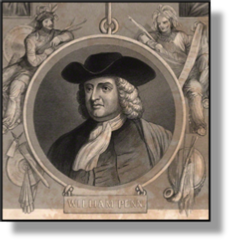 xxxxxWilliam Penn, the son of Admiral Sir William Penn, was born in London and attended Chigwell grammar school in Essex before moving to Ireland with his family. Here he listened to an itinerant Quaker preacher and became so interested in the Quaker movement that on going up to Christ Church, Oxford in 1660 he was later expelled for his non-conformist views. After a tour on the Continent he studied law in London for a year, and then in 1666 was sent by his father to County Cork in Ireland to look after the family estates. It was during this visit that he joined the Society of Friends, devoting the rest of his life to the movement, and becoming a prominent leader and reformer.

xxxxxOn his return to England, his treatise entitled The Sandy Foundation Shaken, questioning as it did Protestant doctrine, soon landed him in trouble. He was imprisoned in the Tower of London, and it was while there in 1669 that he wrote his No Cross, No Crown, a work of religious devotion in which he upheld Puritan virtues and the Quakers' dedication to social reform. He was no sooner out of the Tower than he was sentenced to six months at Newgate Prison. Once again he used his time to good effect, writing four treatises, including his well-argued defence of toleration in The Great Cause of Liberty of Conscience. 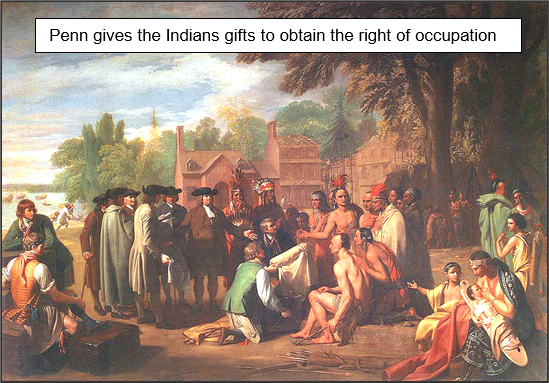 xxxxxIn the 1670s he worked tirelessly as a Quaker minister, writing tracts, travelling the country and, with other leaders, visiting Holland and North Germany - from where many emigrants would later come to join his colony in the New World. This attempt at an ideal Christian commonwealth came about in 1681 when Charles II granted him a piece of land in North America - in settlement of a debt he owed his father. He sailed for the New World in September the following year, together with a number of friends, and it was here in 1682 that he founded the colony of Pennsylvania, established specifically as a refuge for Quakers and other persecuted minorities. He lost no time in making a peace treaty with the local Indians, and, by his Frame of Government, established an elected administration with traditional English liberties and religious freedom for all. Such measures, plus a commitment to pacifism, ensured the friendship of neighbouring colonies. It was at this stage that he also planned and named the city of Philadelphia - meaning "brotherly love". But it was not all sweetness and light during these early days. The settlement which Penn had naively seen as a "holy experiment" soon broke up into various factions, and this caused internal disputes and criticism of Penn himself. And matters were made worse by the incompetence of many of the colony's deputy governors. (The painting above is by the American artist Benjamin West.)

xxxxxIn 1684 Penn returned to England to assist persecuted Quakers but, once again, found himself one of the persecuted. When William III came to the throne in 1688, he was accused of corresponding with his friend, the evicted King James II, and, as a result, was twice charged with treason. He was eventually acquitted, and then paid his second and last visit to Pennsylvania in 1699. He was obliged to restore good order following a period of mismanagement, and in 1701 issued his Charter of Privileges, introducing a new system of government based on a one chamber legislature. On his return to England he was cheated out of much of his money, and found himself in a debtor's prison for nine months. Meanwhile, the quarrels with the colonists continued, and in 1712, whilst negotiating the hand-over of the colony to the Crown, he suffered a severe stroke and spent the rest of his days seriously handicapped. It was a sad ending for a man who had seen in Pennsylvania the promise of a Promised Land.

xxxxxOf his many publications, three are particularly worthy of mention. In 1693 he wrote An Essay Towards the Present and Future Peace in Europe in which he advocated an international organisation capable of ensuring peace by arbitration. In the following year he wrote a history of the Quaker movement, and in 1696 he drafted a plan for the future union of the American colonies, some ninety years before the drawing up of the American constitution.

xxxxxIncidentally, the colony of Pennsylvania was not named after the Quaker William Penn, but after his father, Admiral Sir William Penn - whose fleet had captured Jamaica in 1655. Charles II coined the name, putting in the word "sylvania" (from Latin meaning "wooded") at the request of William Penn the younger.

Map of the Thirteen 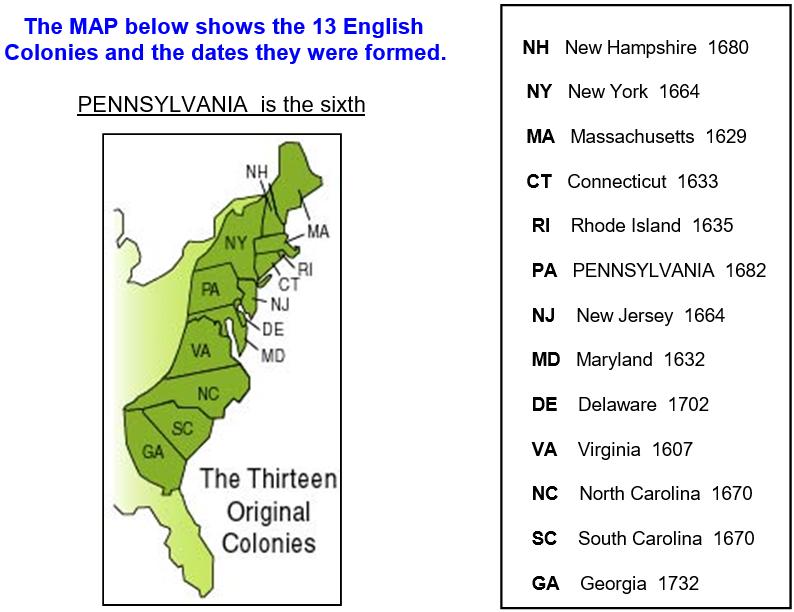