xxxxxThe Peasants’ Revolt, the first great popular rebellion in English history, was, in fact, a series of riots by agricultural workers all over England, but it was centred in Essex and Kent. Its immediate cause was a three-fold increase in the poll tax, but the underlying reason was the economic and social disorder brought about by the ravages of the Black Death, leading to the breakdown of the manorial system and the demand for wages. The Statute of Labourers of 1351 had attempted to stop this change but to no avail. According to Froissart, in 1381, two large armies, led by Wat Tyler and John Ball marched on London and then went on the rampage, eventually killing a number of the king’s ministers. The young Richard II bravely faced the vast mob and promised substantial concessions. In the melee that followed, Wat Tyler was wounded and taken away (later to be beheaded), and the mob dispersed. The revolt was then ruthlessly crushed. Many of its leaders were executed, including John Ball, and the concessions were withdrawn. It might well be that Wycliffe and his Lollards played a part in the rebellion.

xxxxxThe Peasant’s Revolt can certainly be regarded as the first great popular rebellion in English history. It was a series of riots amongst agricultural workers which broke out all over England, but which took a particularly violent form in the counties of Essex and Kent. Its immediate cause was the imposition of a revised poll tax, a flat levy imposed on all over the age of 15 except the clergy. This new tax, coming into force in 1380, increased the previous charge some threefold, and aroused enormous bitterness, falling equally, as it did, on the rich and the poor. The tax collectors who toured the country collecting the tax were hated and feared. In May of that year villagers at Brentwood in Essex drove off one such collector, and this appears to have been the spark that set off the powder keg. Very soon towns and villages throughout the country, but notably in Kent and the south-east, were calling mob meetings, killing the odd tax collector, and attacking the property of the wealthy 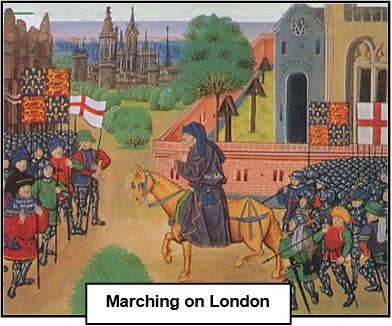 xxxxxBut there were deeper, underlying causes for this unrest, resulting in the main from the economic and social disorder brought about by the ravages of the Black Death. The plague led to a serious shortage of agricultural workers and this accelerated the decline of the feudal system and led to demands for wages as opposed to serfdom. As we have seen, the Statute of Labourers of 1351 attempted to pin wages down to the pre-plague levels and stop the movement of peasants, but it proved virtually impossible to enforce. The increased poll tax, made to finance the war against France, proved the last straw.

xxxxxThe French chronicler Jean Froissart (c1337-c1405) gives a good account of the revolt. In June of 1381 two large armies of peasants from south-east England, led by Wat Tyler and a priest named John Ball, and numbering a few thousand, marched on London to demand reforms. On arriving in the capital the rebels went on the rampage, burning down the palace home of John of Gaunt, and taking over the prisons at Newgate and Fleet. The young king Richard II, only fourteen years of age at the time, bravely faced the mob at Mile End. He promised concessions, and agreed that traitors to the Crown should be punished. Taking him at his word, the mob then went on to the Tower of London where leading ministers had taken refuge, and, among others, executed the then Lord Chancellor, the Archbishop of Canterbury Simon Sudbury (illustrated below), and the king’s treasurer, the much hated Sir Robert Hales. 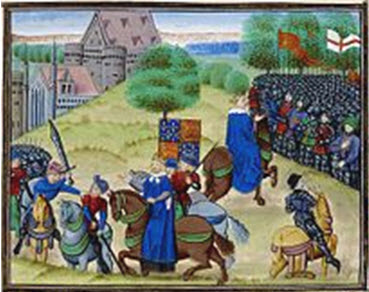 xxxxxAt this stage a second meeting was arranged with the king, this time at Smithfield. Here, the king was accompanied by a number of nobles, their arms hidden beneath their cloaks. Wat Tyler was permitted to address the meeting but when, on being provoked, he drew his dagger, he was immediately attacked by one of the king’s men and badly wounded (illustrated). (He was later dragged from the nearby hospital and beheaded). Again, only the courage and presence of mind of the young king, plus the concessions he then granted, saved the day. The peasants, deprived of their leader and given the promise of reform, including the abolition of forced labour, slowly dispersed. Many were later hunted down and killed, including John Ball, and the concessions made by the king were immediately revoked. The rebels in East Anglia - another area of fairly strong rebellion - were crushed in June and, by the end of the year, the revolt was over. However, the treachery shown by the king was not forgotten, nor were the words he is said to have spoken later: “Villeins ye are and villeins ye shall remain”.

xxxxxBecause there was an anti-clerical undertone within the rebellion - after all, the clergy enjoyed many privileges and were exempt from paying the dreaded poll tax - the church reformer John Wycliffe and his followers, known as the Lollards, were often thought to have played an active part in the uprising. There is no real evidence to support this. On the other hand, John Ball was a follower of Wycliffe, and it is known that some preachers did go around encouraging attacks on the wealthy. Certainly Wycliffe himself at this time would have had a great deal of sympathy for the plight of the poorer classes.

xxxxxThat the rebels managed to storm and enter the Tower of London clearly indicates that some of the warders supported the revolt and opened the gates. The heads of the four executed by the mob on Tower Hill were displayed on London Bridge. That of Simon of Sudbury, however, was eventually taken to the Parish Church of Sudbury in Suffolk, where it is kept in a safe, and can be seen to this day. The skull clearly supports the account that it took several blows to behead the archbishop. In 2011 it was CT scanned and a facial reconstruction produced, here illustrated.

xxxxxIncidentally, Wat Tyler is the hero of a poem by the English poet Robert Southey, composed in 1794. The other major leader of the rebellion, the priest John Ball, who, after the revolt, was tried and hanged in the presence of the king, was the subject of a romance called The Dream of John Ball, completed in 1887 by the English writer and poet William Morris.