xxxxxThe Ottoman Turks failed to take Vienna in 1683, and four years later were roundly defeated by the Holy League at the second Battle of Mohacs. Then in 1697 (W3) they lost the Battle of Zenta to Prince Eugene of Savoy and were forced to accept the Treaty of Karlowitz, greatly reducing their influence in east-central Europe. And when, in 1715, they attacked again, they were once more defeated by Prince Eugene, and had to accept the terms of the Treaty of Passarowitz in 1718. They were obliged to hand over large areas of their Balkan possessions to the Austrians, and agree to a period of 25 years of peace. The Habsburgs were now in command of south-east Europe but, as we shall see, in 1739 (G2) this treaty was broken and the Turks were once more on the offensive.

xxxxxThe failure of the Ottoman Empire to take the city of Vienna in 1683 paved the way for a counter offensive. The Holy League, formed between Austria, Poland and Venice (and with the promise of support from Russia) drove the Turks out of most of Hungary, and then in August 1687 sealed its success with a resounding victory at the second Battle of Mohacs. As we have seen, ten years later the Austrians, led by Prince Eugene of Savoy, won a further victory against the Turks at the Battle of Zenta in 1697 (W3). The Treaty of Karlowitz that followed in 1699 greatly diminished Turkish influence in east-central Europe, where Austria then became the dominant power. 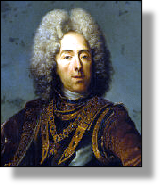 notwithstanding their poor showing in this area, in 1715 the Ottoman Turks again went on the offensive. They forced Venice to surrender the Morea (part of the Greek mainland), and then proceeded to threaten Venetian possessions in Dalmatia and the Ionian islands. Once again the Austrians, determined as ever to keep the Turks at bay, came to the rescue. They formed a further alliance with Venice in 1716 and - again under the command of Prince Eugene (illustrated) - the Austrian army inflicted yet another series of defeats upon the Ottomans.

xxxxxThe outcome was the Treaty of Passarowitz of 1718, mediated and arranged, in fact, by Great Britain and Holland, two trading nations who were anxious to bring peace to the troubled waters of the eastern Mediterranean. For their part, the Venetians retained the Ionian Islands and the conquests they had made in Albania and Dalmatia, but were prepared to surrender the Morea to the Ottomans. 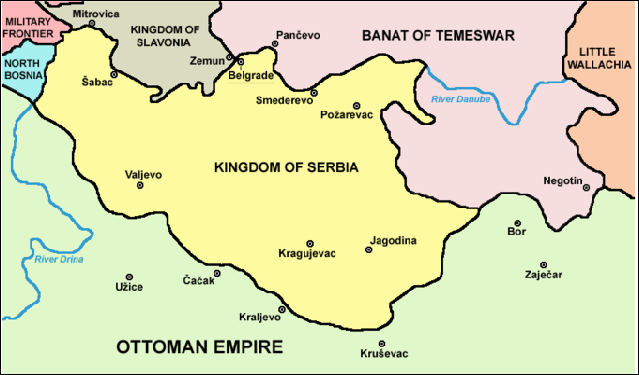 xxxxxThe Austrians made considerable gains. The Turks themselves were obliged to hand over large areas of their Balkan possessions - including Little Walachia, Belgrade and parts of northern Serbia - together with the Banat of Temesvar, their last major stronghold in Hungary. And as part of the settlement, a minimum period of 25-years peace was agreed between the Ottoman Empire and Austria, and a commercial agreement between the two powers gave the Austrians certain trade privileges. The Hapsburgs were now firmly in charge in south-east Europe, but, as we shall see, this treaty, complete with its promise of a long period of peace, was not to be. The Turks were once more on the offensive in 1739 (G2).