xxxxxThe Prussian victory over the French at the Battle of Sedan in September 1870 did not bring an immediate end to the war. In Paris the Third Republic was declared and the city, totally surrounded, prepared for a defiant stand. A Government of National Defence was also set up. This raised over thirty military divisions in the provinces aimed at relieving the capital, but these were poorly equipped and trained, and proved no match for the Prussians and their German allies. Paris too was eventually forced to surrender in January 1871 after undergoing three weeks of heavy bombardment. In the meantime, at their headquarters at Versailles, Kaiser Wilhelm I received the allegiance of all the German states, and the Unification of Germany was achieved. At the Treaty of Frankfurt in May, the newly elected French republican government had to cede Alsace and part of Lorraine to Prussia, and was forced to pay a huge indemnity. In the meanwhile, under its leader Alphonse Thiers, it had to deal with a rebellion in Paris, where republicans and socialists, opposed to the armistice, set up The Paris Commune, their own municipal government. This was ruthlessly crushed after a two-month siege, but it was not until 1879, with the monarchists discredited, that the republicans established the Third Republic on a sound footing.

THE SIEGE OF PARIS: 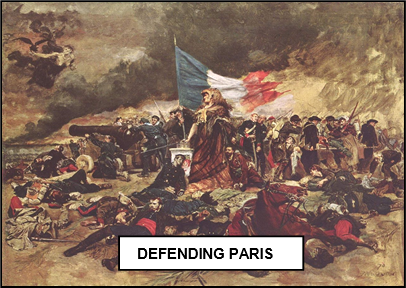 xxxxxAs we have seen, in September 1870 the French Empire of Napoleon III was overthrown following the Prussian victory at the Battle of Sedan. However, the fighting continued. Republicans in Paris declared the Third Republic, and the capital was made ready for a defiant stand. AxGovernment of National Defence was established, and the following month the newly appointed war minister, Leon Gambetta (1838-1882), escaping from the beleaguered city by hot-air balloon, set up a government delegation in the city of Tours to organise and direct the war effort in the provinces.

xxxxxOver the next few weeks more than thirty military divisions were hurriedly assembled to go to the relief of the capital but, poorly trained and ill-equipped, they proved no match for the invading forces. Metze and Strasbourg were forced to surrender, and by then Paris was surrounded by a Prussian army of some 240,000 troops, complete with field artillery and more than 300 siege guns. The French garrison fought on courageously and made a number of attempts to break out - notably at Le Bourget and Villiers - but all ended in failure. Eventually Bismarck, concerned that the delay might encourage wider resistance, ordered general von Moltke to bring the siege to an end. An artillery bombardment of Paris was begun in the New Year and continued for over three weeks. This, together with an ever growing shortage of food and the sheer exhaustion of the garrison’s manpower, brought about the city’s surrender on the 28th January. The Franco-Prussian War was at an end. 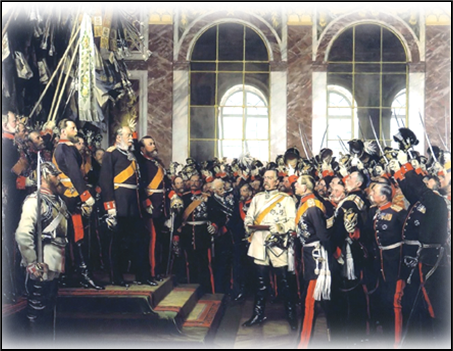 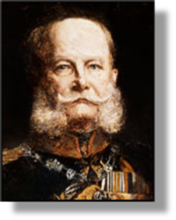 xxxxxMeantime,, whilst Paris suffered, Bismarck wasted no time in completing the Unification of Germany under Prussian leadership, a union begun in the Austro-Prussian War of 1866, and now cemented in the war against France. In the imposing Hall of Mirrors in the Palace of Versailles, some fourteen miles outside Paris - then under bombardment - Wilhelm I received the allegiance of all the German states and was proclaimed Kaiser (Caesar) of the Second German Empire (illustrated). Ten days later the war came to an end. 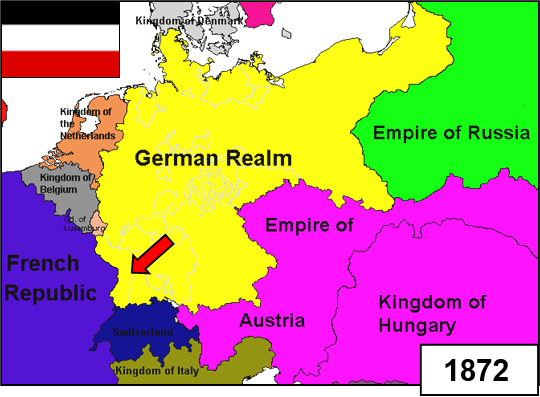 xxxxxIncidentally, the unification of Germany set in motion the Three Emperors’ League, formed the following year (1872) to protect the conservative governments of Austro-Hungary, Russia and the new Germany against the growth of liberalism in Western Europe, notably in France and the United Kingdom. Republicanism and socialism were seen as the greatest threat. However, as we shall see, the league fell apart at the Congress of Berlin in 1878, and left Russia feeling isolated and vulnerable - with serious long-term consequences for the stability of Europe.

xxxxxThe Franco-Prussian war being finally over, the hasty terms of surrender agreed by the city of Paris at the end of January 1871 became part of a general armistice. This gave the French a period of three weeks in which to elect a national assembly which had the authority to negotiate an official peace settlement. The elections, held in early February, showed a large majority in favour of concluding the war, and after the French assembly had met at Bordeaux and elected Adolphe Thiers as Head of State, the Treaty of Frankfurt took place in May. By its terms France gave over to Prussia the province of Alsace (save for Belfort) and the Lorraine department of Moselle (including Metz) (arrowed on map above), and was obliged to pay a huge indemnity - some five billion francs. German troops, after staging a triumphant march down the Avenue des Champs-Elysées in Paris, remained in eastern France until the final payment was made in September 1873. In the short space of five years, 1866 to 1871, Bismarck’s Prussia had emerged as the leader of a united Germany, the most powerful nation on the European continent. 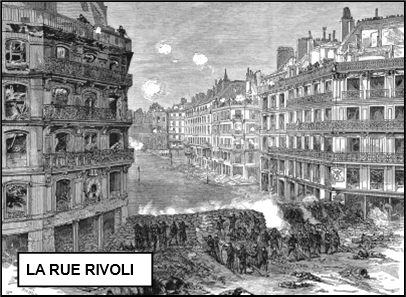 xxxxxBut whilst, as it might be assumed, the surrender of Paris at the end of January 1871 and the Treaty of Frankfurt that followed, marked an end to the fighting, it was not to be. The new French government, elected the following month, was faced almost at once with a serious revolt within the capital, - a city which had already endured the severe hardships of a four month siege and the worst winter in living memory. The new right-wing National Assembly with its large majority of monarchists found itself strongly opposed by a hard core of socialists and republicans, and when, in March, Thiers attempted to disarm the National Guard in Paris - a citizens’ militia formed to defend the city – by seizing the cannons on the heights of Montmartre, this left-wing movement created a municipal government of its own - The Paris Commune. This came out in protest against the harsh terms of the armistice, and took control of the city in the name of the working class. A few days later similar communes were established in Lyons, Marseilles and Toulouse. These were overthrown within a matter of days, but in Paris the forces of revolution - a hark-back to the heady days of 1789 in some respects - held out for more than two months. Despite extreme depravation - caused mainly by a nightmare shortage of food and fuel - thousands manned the barricades in a determined show of defiance. 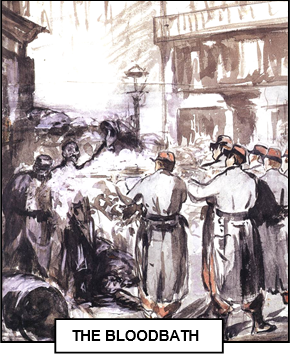 xxxxxBy May the republican government, fearing that it faced a grass-root rebellion that might easily spread, had mustered a sufficient force at Versailles to take Paris by storm and regain the capital. On reaching the outskirts of the city, the government forces gained easy access to the western part - the more affluent area - and then poured into the central districts. There followed what has come to be known as la semaine sanglante (seven days of blood letting), during which atrocities were committed on both sides. The hastily erected barricades were quickly breached by the government troops, and in the vicious street fighting that followed thousands of the city’s defenders, men, women and children, were massacred. Those who were not shot in cold blood were executed by hastily assembled firing squads. In the space of a week it is estimated that some 25,000 Communards and sympathisers were killed, and this was followed by the imprisonment or deportation of almost double that figure. All resistance was over by the end of the month. (The illustration above is by the French artist Édouard Manet.)

xxxxxThe Paris Commune, regarded by some as the first socialist government in history, and, as we have seen (1867), optimistically hailed by Karl Marx as communist inspired, did put forward a series of social reforms during its brief existence - such as votes for women, the separation of church and state, and measures to ease the working conditions of the common man - but it was a republican movement with radical ideas rather than a people’s revolution. As such it proved successful by its very defeat. The stern and decisive measures taken by Thiers against the Commune strengthened in fact the status of the republican government.

xxxxxIn January 1875, with the monarchists bitterly divided as to the right candidate for the throne, the constitution of the Third Republic was established. This was seen by many as a temporary arrangement, but after the monarchists failed in their bid to seize power in 1877, the republicans grew in number and gained control of the Senate in January 1879. After much trial and tribulation France had settled upon its future form of government, come what may.

xxxxxIncidentally, a poignant short story entitled La Dernière Classe, written by the French author Alphonse Daudet, and published as part of his Lettres de Mon Moulin (Letters from My Mill), is set in a school in Alsace in 1871. The Germans are about to take over all the schools in the province, and the last class to be held in French - “the most beautiful language in the world” - is seen through the eyes of one of the young pupils ……

xxxxx…… Thexfear of an invasion of England following the Prussian victory over the French, though never deep rooted or widespread, was heightened in 1871 with the publication of The Battle of Dorking. Written by George Tomkyns Chesney (1830-1895), a senior officer in the British army, it gave a graphic account of the defence of the English town against an unnamed enemy - though the invaders just happened to speak in German! ……

xxxxx…… So acute was the shortage of food during the siege of Paris that people were forced to eat any animals they could find, including horses, dogs, cats and rats. The city zoo was also raided. Apart from lions, tigers and monkeys, all the animals were slaughtered, including Castor and Pollux, the only p 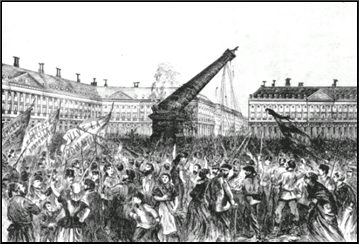 xxxxx…… On 16th May, during the Paris Commune, the Vendôme Column - a tribute to an earlier Napoleon - was pulled down amid great rejoicing. Later, however, photographs taken of the event were used to identify those responsible, and they were put on trial. As we have seen, among those who were imprisoned was the French painter Gustave Courbet. During the Commune a great deal of damage was done to public buildings throughout the city.

The Treaty of Frankfurt,

and The Paris Commune