xxxxxAs pointed out in 1300 (E1), by the death of Osman, founder of the Ottoman Empire, in 1324, the Turks had seized Byzantine towns in Anatolia. His son Orhan (reigned 1324-1360) continued the advance southward and reached the Sea of Marmara in 1345. Then in March of that year his forces gained a foothold in Europe by capturing the peninsula of Gallipoli. His son, Sulyman then made raids into Thrace (Greece). Orhan’s successor, Murad I, advanced further into the Balkans. By 1366 his forces had advanced far into Thrace, and five years later, they defeated the Serbs and Bulgarians at the Battle of Samakow. In 1373 the Byzantine Emperor himself had to accept Turkish domination. Then, as we shall see, in 1389 (R2), by the Battle of Kosovo, Murad gained full control of the Balkans. The final end of the Byzantine Empire came with the Ottoman conquest of the empire’s capital, Constantinople, in 1453 (H6).

xxxxxAs we have seen (1300), it was during the reign of Edward I that Osman, the ruler of a small principality in north-western Anatolia (modern Turkey), declared himself independent of the Seljuk sultanate of Iconium and founded the dynasty that established the Ottoman Empire, (the name being derived from the Arabic version of his name - Uthman). He advanced westward against the ailing Byzantine Empire and, by his death in 1324, had captured the strategic strongholds of Yenisehir and Bursa. 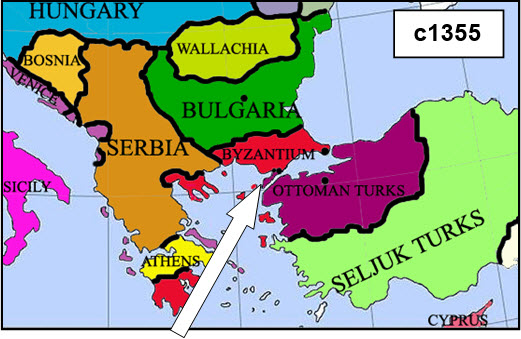 xxxxxOsman’s successor Orhan, who reigned 1324 to 1360, quickly swallowed up the remaining Byzantine towns in Anatolia and then, moving southwards, reached the Sea of Marmara in 1345. The first move into Europe came in March of that year when Ottoman mercenaries employed by the Byzantine emperor John Cantacuzenus, turned against their leader and, taking advantage of the chaos caused by an earthquake in Gallipoli, seized the peninsula. Under the leadership of Orhan’s son, Suleyman, this rocky headland was turned into a fortress. The Ottoman Turks had gained a foothold on European soil. An arrow on the map points out the Gallipoli peninsula. 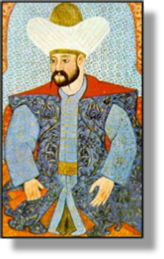 xxxxxSuleyman then made a number of raids into Thrace (Greece), but it was left to Orhan’s successor, Murad I (illustrated), to start the conquest in earnest. Under his rule the Turks, avoiding Constantinople because they lacked siege equipment, rapidly advanced into the Balkans. In 1366 the Byzantine Emperor, John V, sought help from Hungary but he sought in vain. By that year the Turks had advanced far into Thrace. In 1371 they defeated the Serbs at Chernomen, near Adrianople on the River Marica, and followed this up with a victory over the Bulgarians and Serbs at Samakow. Now Bulgaria and much of Serbia were made vassal states and, two years later, the Byzantine Emperor himself was obliged to accept Turkish domination, paying tribute and providing military assistance to the Ottomans. 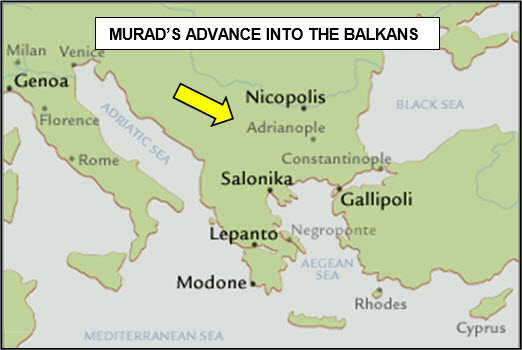 xxxxxMurad now prepared for a long stay. He established his European capital at Adrianople (arrowed), renamed Edirne, and, by supporting local native rulers in his newly-acquired territory, avoided costly administration and the need for large occupation forces.

xxxxxAs we shall see, Murad resumed his offensive in 1380 and, despite some setbacks, gained control of the Balkans with his victory at the Battle of Kosovo in 1389 (R2), though he himself was treacherously killed during the battle. This was but another victory for an Ottoman Empire which, at the height of its power in the sixteenth century, was to stretch into Europe as far as Hungary, and to rule over Iran, part of southern Russia, the Palestinian coastline, Egypt and the lands of north Africa. The final end of the Byzantine Empire came with the Ottoman conquest of the empire’s capital, Constantinople, in 1453 (H6).